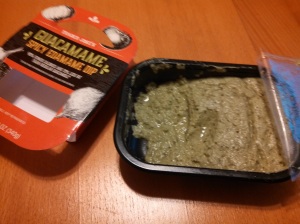 Ever get tired of guacamole that just resembles guacamole too much? Here, this product is for you.

Adventures in guacamole continue with Trader Joe’s Spicy Guacamame Spicy Edamame Dip– a 100% edamame based gucamole. Having just reviewed Trader Joe’s semi-guac, the Reduced Guilt Guacamole with Greek Yogurt, it was a no brainer to pick up this brand new little doozy sitting on the shelf right next to it.

At first glance, this “guacamame” seems to combine the healthy aspects of the lite guacamole from last week, with the puns-manship of Avacado’s Number Guacamole – the best of both world’s surely! Of course the proof, as always, is in the pudding.

That means, if you eat this guac instead of that guac, you’ll have had 5.5 grams less fat, but 55 more calories. There’s also, like, one more carb / serving in this one. To me that’s a small enough difference that this grudge match can be settled on taste alone.

Of course, that raises the question – isn’t Trader Joe’s just undermining their own efforts by making two products fight for the same, narrow conceptual space? Does TJ’s really have room for more than one non-traditional, diet-friendly quasi-guacamole? I’m sure  market forces will decide this one ultimately, but it seems weird. Honestly, this feels like another Fruit Bar / Fruit Wrap style inter-company rivalry.

So that brings us to taste. The sad truth, in my opinion, is that the somewhat subpar reduced-guilt guacamole from last week is still better than this Guacamame. Before I can even get started on this, it needs to be said that Guacamame is much better thought of as a bean dip than anything like really guacamole. That’s hardly surprising given the all-beans-no-avocados approach of the dip. It may be green like guacamole, it might even be spicy like guacamole, but it has the same sort of mediocre taste and, more importantly, has the same mouth feel of a bean dip. You know that sort of loose gritty feeling you get from a hummus or pinto dip? That’s the exact same feeling you get here.

Even taken on the grounds of being a  spicy bean dip alone it’s not great. The dip is very loose – much looser than most bean dips, and certainly nothing like guacamole. The edamame beans have been blended into a single, smooth, slightly running mash alongside some tofu, jalapenos and starch. It certainly lights up your mouth with a touch of fire, but beyond that there’s no particular flavor to enjoy – just that bean-y grit. With nary a chunk of anything, let alone avocado, in sight I must once again wonder if the Gucamame would have fared better if Trader Joe’s never tried to compare it to guacamole in the first place.

Shockingly, our Guacamame goes under the Trader Jose’s brand name. Really, TJ? You’re trying to tie your experimental non-guacamole made from Japanese soybeans to a rich Hispanic heritage? A spicy edamame dip made with tofu and modified tapioca starch, just like they serve up in the old school cantinas on the backstreets of Veracruz? I wouldn’t mind it so much if you hadn’t oddly left the “Jose” name off of the reduced-guilt guacamole. It all goes to make me increasingly suspicious that the naming office of Trader Joe’s is run by a single, over-worked monkey who’s heart just isn’t in it any more. Also he might be having troubles at home.

At any rate, there might just be enough body and flavor to replace a spicy bean dip with Guacamame, but certainly not your guacamole.

Would I Recommend It: I’d recommend the reduced-guilt variety first.

Would I Buy It Again: I would not. There are much better gucamoles out there.

Final Synopsis: A weak guacamole substitute made from edamame soybeans and tofu.