The mini wontons I get, but who has a dish with individual mini compartments for each mini wonton? You’re living in a dream world Trader Joes!

Mini wontons. What a world of astounding technical innovation this is – our computers are becoming increasingly smaller, the pixels in our devices are shrinking to infinitesimal points, and now Trader Joe’s has successfully miniaturized the wonton.

How did they manage the technological breakthrough that is Trader Joe’s Chicken Cilantro Wonton? Microchips? A pact with helpful elves? There’s no telling, but here they are nonetheless. This leaves only one question worth answering: Is it okay to just cavalierly mix cilantro into your Chinese wontons, no matter how small they are?

Actually, there’s nothing new about mini-wontons cooked with cilantro. A recipe very similar to the one Trader Joe’s is peddling can be found throughout Shanghai. As you might expect, different regions and cities throughout China have their own unique spins on the concept of wonton. Although more famous for their massive, tortellini-shaped wontons, China’s largest city also has a long tradition of peppering their soups with handfuls of these tiny, cilantro-seasoned wantons – properly called xiao huntun.

A wonton is, ultimately, a very simple recipe (some meat, some greens, a little seasoning) and lends itself to all sorts of interpretations, so there’s nothing that shocking about cilantro in a wonton. Taste-wise, there isn’t much to write about. Despite the prominent billing of cilantro in the mini-wontons, they don’t actually taste that strongly of cilantro. The potent herb is hidden under the chicken and other seasonings, only showing up later, as a mild aftertaste wafting off the tongue.

This isn’t altogether surprising, seeing that cilantro is listed in nearly the last place on the nutritional label, outdone by bean thread, salt, and green onions. This is not necessarily a bad thing, it’s easy to abuse cilantro and its presence in this dish is subtle and effective, a gentle touch that sets the wontons apart from the potstickers and gyoza of the world – just don’t come crying to it for your cilantro fix.

Cooking the wontons could not be easier. Two minutes in a microwave makes up a big batch, and pan-frying or soup based cooking directions are included as well. Add to this the generous number of wontons included in each bag (about 50) and you’ve got an easy to prepare, tasty Chinese meal for 1-3. If only they’d replace “cilantro” with “shanghai-style”, I’d have nothing to complain about.

Would I Recommend Them: Easy to prepare and good tasting – definitely.

Would I Buy Them Again: With some Asian stir-fry, this could become a standard Chinese dinner for me. 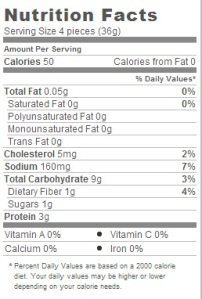