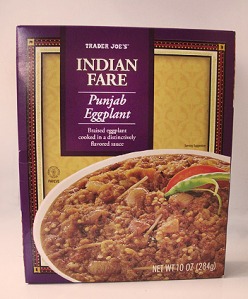 Okay, now this confuses me. I’ve made the observation before – but I must again express how perplexed I am by their naming conventions.

Trader Joe’s Cacciatore being placed next to Trader Giotto’s Balsamic Glaze is one thing. But Trader Joe’s Indian Fare Punjab Eggplant? Why delve into such twisted wording when there’s so much existing precedent? Just call it Trader Juhi’s Punjab Eggplant leave it at that – we’ll figure it out.

Sigh. Sorry, but proper applied nomenclature is one of my buttons. Look, let’s just talk about this delicious, savory dish and forget all about it.

Though my haughtier, Indian-cuisine loving friends will probably roast me in a tandoor for saying so, I really liked this dish. Simple, cheap and bursting with flavor – what’s not to like?

This is roasted eggplant done right. Pay attention, you crappy ajvar, you might learn something! I mean let’s take a look at the (typically) awesome ingredient list: four veggies (eggplant, tomatoes, onions and pumpkin), a host of wonderfully Indian spices (coriander, cumin, turmeric, ginger, all that), and not a preservative or artificial color in sight. Of course, there’s the sunflower oil as well, which they go more than a little heavy on. It does nothing to harm the taste – but when 60% of your calories are from fat, it’s time to ease up.

The taste is typically Indian, thanks to the medely of spices listed above, and the eggplant simply lays back and lets them go to work. There isn’t much recognizable left of the eggplant, but that’s okay by me. It might have ended up as a sort of beige mush, but that’s beside the point. The eggplant is there more as a medium for the intriguing aroma and complex taste of the cooking, both of which are entirely enjoyable.

Okay, so maybe it’s lacking a little something in the class department. Food that gets served to you in ready-to-heat Mylar pouches can’t help but make you feel like you’re standing barefoot in your college kitchen again. It’s better then even a TV dinner for dissipating all the day’s successes and making you realize that, oh yeah, you’re just a fat, lonely man.

The other gripe is that, yes, it looks like a big pile of wet cat food when you pour it onto your dish. That would probably be more depressing if it didn’t smell so damn good, redolent of everything you expect Indiant food to be.

Everything else aside, Trader Joe’s Punjab Eggplant wins one award from me – Most Creative Serving Suggestions. Check it out: “Serve with fluffy rice, hot Indian bread, pita – or as a burrito stuffing.”

Burrito stuffing!? Whoever came up with that one, I want to high five you. I live in LA, spiritual heartland of “Let’s mush stuff together and call it fusion” cuisine, and I have not yet seen such a thing. Indian-mexican food? What could be more natural?

Finally, I’m let to wonder, once again, why we can’t figure out how to make delicious (and cheap) meat-free food in the West when the Indians knock it the hell out of the park again and again. Let’s get on the game here vegetarians! Food without meat in it should taste great and cost less. America can do this!

Would I Recommend It: Yes, especially to inept cooks like myself.

Would I Buy It Again: That seems pretty likely. 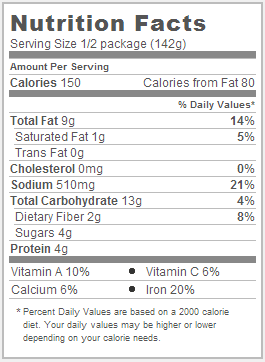