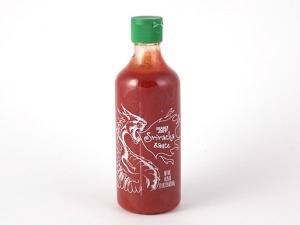 An upstart Dragon arises in the West to challenge the Eastern Cock.

Well I certainly wasn’t expecting this. Trader Joe’s has always blazed its own, idiosyncratic course when it comes to it’s food offerings. Rarely do they stoop to blatantly biting on someone else’s style, as they do here with Trader Joe’s Sriracha Sauce. Even more surprising, while it may share the name, this very tasty hot sauce is a different beast entirely.

You know sriracha, you love sriracha, you probably have some in your fridge right now. That is, unless you’re an avowed chili wuss like myself. As a rule, I steer clear of the hot stuff, and that means that, until today, I’ve gently skirted my way around Trader Joe’s Sriracha Sauce whenever I crossed paths with it in the store. Finally, like a kitten being introduced to a new squeaky toy, my curiosity has overcome my fear and I’ve made the plunge. The results have been unexpected.

My basis for avoiding sriracha hot sauce for 99.9% of my life has been based on a few, memorable encounters with the sriracha hot sauce, Huy Fong Food’s Tuong Ot Sriracha, aka the rooster sauce, aka the huge, bright red bottle of thick fiery paste.

I may have missed out on a wide variety of BBQ sauces in my youth, but there was no missing this screaming red blast of hot lava, rising like a flaming obelisk over the tables of South East Asian restaurants from NY to LA. Tuong Ot Sriracha! That thick red paste of concentrated burning hot jalapenos. That thick ooze the consistency of axle grease. That famous recipe made with no water-added. (A point of pride at Huy Fong Food. Check it out yourself: no water, just a splash of vinegar five ingredients down the list). Such a mush of pure heat that is impossible to apply in moderation to your food – leading to concentrated pockets of burning pain or to a plate plastered in a thick layer.

Sure, I tried some Sriracha, curious young man that I was. I tried it and it burnt me – hard. I had no more reason to return to the Devil’s teat. No reason, that is, until now.

Not all sriracha sauce, it turns out, is like Tuong Ot Sriracha. In fact, most isn’t. Unlike the Huy Fong Foods version (a Vietnamese-Chinese product) sriracha is originally a Thai invention, hailing from the town of Si Racha, naturally. Authentic Thai sriracha sauce is a much runnier, tangier sauce, more akin to what we’d consider a “normal” hot sauce to be in the west. It’s this Thai style sriracha that TJ’s is basing it’s version off of.

Trader Joe’s Sriracha Sauce is looser than the rooster sauce, and bring actually flavor to the sauce as well. Much tangier, a little tiny bit sweet and a touch bitter – it’s a complex, rich taste that enlivens soups, noodles, entrees, pizza, basically anything and everything, all without the threat of igniting all the mouth’s surfaces.

Is it still hot? Unequivocally, yes. But it’s noticeably a notch down from Tuong Ot Sriracha. Think Cholula compared to Tabasco. I image this might upset some of the hard-line hot sauce die hards out there, those who seek pain before pleasure in the sauces, but please try it before you judge it. You might just find the flavor more than makes up for the slightly cooler heat.

For the rest of us, or even those who fear the flame like myself, this might just make you look at sriracha sauce in a whole new light.

Would I Recommend It: Yes – this sauce is a sriracha revelation.

Final Synopsis: A srircha sauce that straddles the line between the super hot Huy Fong Foods version, and the authentic Thai version.