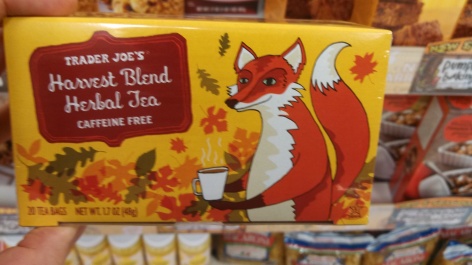 There is such a thing as going *too* whimsical. A chill fox sipping a cup of tea, however, is right in the sweet spot.

Yes, yes, yes Trader Joe’s! Now we’re talking awesome tea! Trader Joe’s Harvest Blend Herbal Tea gives me a reason to look forward to tea time with eagerness every day. I have, to date, avoided reviewing TJ’s teas, for much the same reason that I avoided reviewing their otherwise amazing coffee – fear of dabbling in an arena where there is so much vehement opinion. But where regular Joe’s venture so too much venture I, and that leads us to tea.

Glancing at this box on the shelf I assumed TJ’s was making a play for the Lipton market share – their Harvest Blend tea box using the exact same color palette seen on Lipton’s giant boxes of stridently mundane tea bags. This thought was reinforced in my mind by the rather vague name. “Harvest blend” bringing to my mind the thought of nothing more flavorful than fallen foliage brewed over hot water. Ah, how wrong I was!

Trader Joe’s Harvest Blend Herbal Tea packs an incredible amount of savory, spicy flavor into their large, square bags – so much that you can easily get two full cups of tea out of one bag. The taste is apparent immediately upon opening the box – a strong, redolent blend of orange, chicory, hibiscus and cinnamon on a soothing chamomile base. My experience with delightful smelling herbal teas has generally been that they smell much better than they actually taste in your cup. Incredibly, Trader Joe’s Harvest Blend Herbal Tea actually tastes even better than it smells. A savory, full bodied spiciness comes out of the ingredients as they steep, along with a surprising sweetness – a very mellow, subtle sweetness that accentuates the mix of spices. I say surprising because there’s no added sweetener to the tea bags. The sweetness comes from, and I’m not certain on this but willing to make an educated guess, unimaginable magical sources. That or maybe the natural apple and orange. Forget about your tea for 15 or 20 minutes and the sweetness will have infused the whole cup, a distinct hint of ripe apple.

In any case, this tea has exactly what you want for cool, crisp autumn evenings. Soothing tastes, warming spices and gentle sweetness. Perfect for sipping in a sweater as the leaves blow by.

The box itself, by the way, wins the award for Craziest Product Description, an award I’m always happy to give out. The product copy has the tone of being trapped on a box not of it’s own design, desperately attempting to make sense of a mad world.

It begins by immediately questioning it’s own premise, “A fox enjoying a cup of tea?” it asks, then, realizing it’s blowing the sale, hastily attempts to cover up. “Of course.” Full stop. “It happens all the time – if that tea is Trader Joe’s Harvest Blend Herbal Tea” You can almost hear the nervous tremble in its voice, reassuring itself more than anyone else. The box goes on to make several, increasingly unhinged claims. This includes the assertion that this tea will bring you “unbridled joy with each sip”, which is a lot more than I’ve ever asked from a tea, before suddenly announcing that it will make you feel like, “A wise owl who’s just discovered the secret of eternal happiness.”

This owl bit seems like a particularly random non-sequiter – until you open the box. Just under the flap sits a picture of a wide-eyed, staring owl, perhaps originally envisioned as a soothing image, but executed here in a hand-drawn, jittery style that makes the owl look strung out and harrowed. It gazes blankly at nothing with huge dilated pupils – as if it just discovered the secret of eternal happiness, and that secret is an unspeakably profane blood sacrifice.

Other than that, though, this is a very good tea.

Would I Recommend It: Yes, this is delicious tea!

Would I Buy It Again: Definitely, it’s got everything you want in a seasonal herbal tea.

Final Synopsis: The perfect tea for sipping as you watch the weather change.