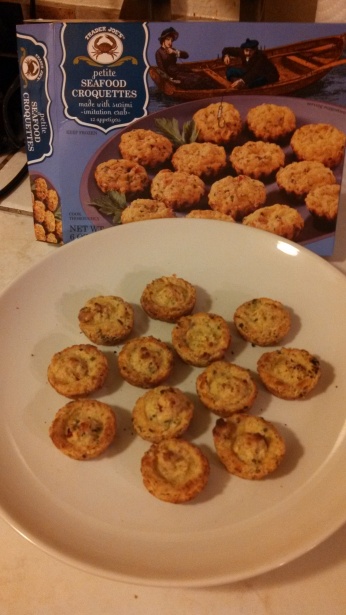 Made with imitation crab – TJ’s makes a clean breast of it right in the title.

Trader Joe’s Petite Seafood Croquettes are pretty dang good. Maybe not New England crab shack good, but still good in their own right. Of course, these seafood patties are not to be confused with Trader Joe’s Maryland Style Crab Cakes, Seafood Crab Cakes or, really, anything that might actually contain anything like real crab. These mini seafood croquettes are, of course, made with imitation crab, also known as krab, mock crab, or seafood extender, but most commonly called by it’s official name surimi.

No doubt you have encountered the let down that is surimi imitation crab many times in your life when you thought that maybe you were actually eating real shellfish. Those happy moments come to you via far eastern Asia, a land known for it’s love of heavily processed deep sea food products. Surimi first popped into existenece in Japan, 1963, in the chilly Hokkaido food laboratory of one Nishitani Yosuke, the man who first industrialized the process of taking nearly any sort of cheap, white fish and machine processing it until it becomes a semi-gelatinous, bland lump. Surimi is produced for it’s texture first and foremost, then flaovred as needed to resemble the crab/lobster/scallops/whatever is more economically, if not culinarily, desierable.

So cost effective was Mr. Yosuke’s discovery that it was immediately taken to heart by food manufacturers the world over. Today 2-3% of the global fish catch is directly processed into surimi. That’s roughly 3 million pounds of fish going under the mechanical pulverizers annually or, to put it another way, about 4 tons of surimi being extruded every day.

Most surimi is made from pollock, or our old friends hake. The surimi that we’ll be trying today comes from the threadfin bream, a very boring normal looking fish that you’d forget about as soon as you saw it. Explaining to you what threadfin bream tastes like would be beside the point of this article. Trader Joe’s seafood croquettes has about as much in common with the fish they’re made from as dinosaurs have with the fuel in your gas tank.

So with all that out of the way, what can you expect from one of these croquettes? A rather pleasant experience actually. Despite the mishmash of quasi-seafood ingredients going into these seafood cakes, they taste pretty close to the real deal. Certainly close enough that you won’t mind paying only $4.99 for the box of them.  The mock crab is mixed with egg whites, sour cream, cheese, breadcrumbs and a variety of dehydrated veggies. The result is a very passable entree. A quick trip to the oven will get these guys lightly browned, crispy on the outside, and tender in the center – perfect for crunching lightly between the teeth. They smell just right as well, rich and savory with an aroma very near real crab.

This are basically high quality fakes – they won’t impress anyone looking for the real thing, but if you’re in the market for similacra it’s going to be hard to find better than this. My only real complaint is that they are a little off putting visually. As you can see in the above photo, they look less like the hand-formed patties shown on the box and more like they were squeezed out of a tube into row out of row of pre-sized receptacle. It’s the one touch that breaks the illusion that you are eating real seafood.

Would I Recommend Them: Yes, to anyone who can’t afford real crab cakes.

Would I Buy Them Again: Yes, since that includes me. 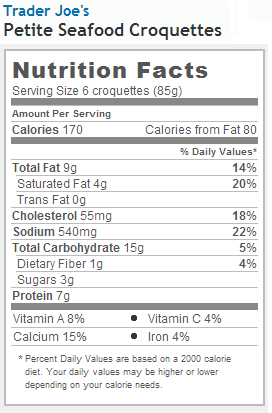