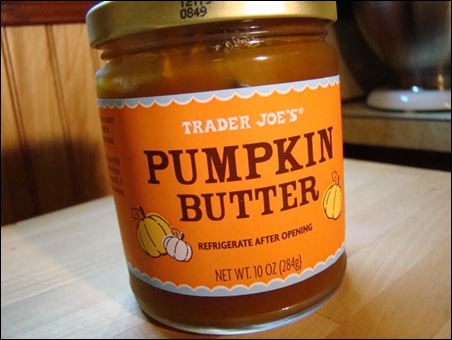 Pumpkin butter coming at you at a dutch angle! Whoa – look out!

There was no question in my mind about which of Trader Joe’s ridiculous list of pumpkin products I was going to try next – the pumpkin butter. I could barely conceive of what this product might possibly look like, but my best guess was something like a stick of butter but orange. I was entirely surprised, and slightly disappointed, to discover that Trader Joe’s Pumpkin Butter was not actual butter butter, but the apple butter kind of butter. A classic, “Ah – of course, I’m an idiot” moment.

Despite my initial confusion, this pumpkin butter is actually rather good, in a fruit butter sort of way. By which I mean that it’s very sweet, very creamy and entirely suited for any of your general or seasonal fruit butter purposes – whatever those might be. Which is to say, again, that it’s nice but pretty unnecessary by anyone’s definition of the word.

Pumpkin butter is a fruit butter – which is basically what you get when you cook down a load of fruit, puree it and thrown in some sugar and spices. What you end up with is a creamy, smooth spread that tastes like a sweet fruit jam, but spreads like a dream.

If you’ve ever had apple butter, you’ll know what to expect from Trader Joe’s Pumpkin Butter. If you haven’t had it, imagine eating a jar of sweet pumpkin pie filling and you’re not far off in both taste and consisetnecy. I’ve tried it on a variety of food products, and each time I’m left with the same sensation – like I’m eating the center out of a pumpkin pie that is subtly wrong somehow.

Other than the pureed pumpkin, there’s not a lot to pumpkin butter. For instance, despite its very smooth consistency there is no butter, cream or fat of any sort in the spread. There’s also much less sugar than you might expect from such a decadent spread. The butter is sweetened with sugar and honey, but only to the tune of 9 grams of sugar per 18 gram serving. While 50% is a pretty considerable sugar to food ratio by most standards, it’s a big improvement over the 70+% you find in most jellies and jams. What that really means is that you’re going to want to come to pumpkin butter for the pumpkin first and the sweetness second.

So what do you do with a pumpkin butter? Well, the jar itself happily suggests you try it as “a pastry filling, a poultry glaze, an ice cream topping, on toast, mixed with fat free cream cheese, and as a soup”. In other words, you can do everything and nothing with it. It’s like we’re talking about a sneed here. Works as an ice cream topping and a soup? Really, TJ? Because nothing else in the world does that. In fact, I’m going to have to give this Trader Joe’s Most Creative Serving Suggestion award – ripping away from the former champion.

So yes, pumpkin butter is probably totally unnecessary – but on the other hand, that can be said of all seasonal holiday products. The real merit of this class of food is how tasty it is and, more importantly, how much it helps you get into the spirit of the season. On those grounds, Trader Joe’s pumpkin butter is reasonably effective, but not a knock out. By it’s very nature as pumpkin butter it’s so rich and thick that it’s hard to integrate into your daily routine.

If you’re planning on baking holiday pastries or hosting a pumpkin themed dinner, this is probably a great purchase for you. As a regular sort of Joe, I don’t plan on doing anything with this other than putting it on the occasional piece of toast and, if I’m feeling particularly fey one of these evenings, making a nice bowl of pumpkin butter soup out of it. Pumpkin Butter on toast has been okay, but  something I could skip in the future.  As for the soup, stay tuned for an update.

Would I Recommend It: Not unless you’re already a fruit butter fan or can’t get enough pumpkin.

Would I Buy It Again: Sadly, no. I don’t have anything to do with it.