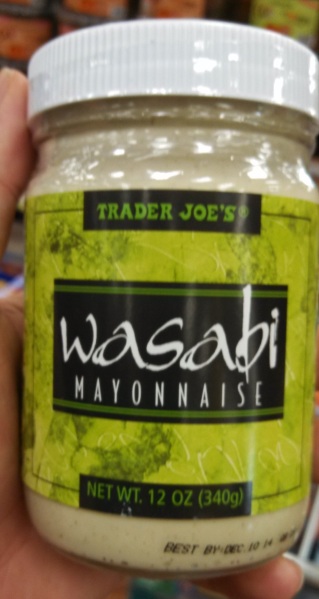 The lying little jar itself.

I was truly surprised when I saw Trader Joe’s Wasabi Mayonnaise. I suppose it’s quite provincial of me to be surprised by flavor tweaks to traditionally mundane condiments, it is, after all,the year two thousand and fourteen, miracles abound. I have, for instance, in my cupboard this very minute a bottle of balsamic vinegar infused ketchup from Heinz, of all people, and a plastic canister of PB2. In the face of that mixing a bit of powdered horseradish in with a ubiquitous and world famous emollient in desperate need of reinventing itself is practically child’s play.

Nevertheless, I was surprised. Wasabi mayonnaise is a very clever update on everyone’s favorite egg-based salad dressing and sandwich spread. I’ll cut right to the chase here, because we have plenty to get to today. Trader Joe’s Wasabi Mayonnaise is an excellent tool to have in your condiment tool box. It does everything that regular mayonnaise does just as well, plus it adds an extra dimension of bold spice to the mix. The mayo is thick, smooth and creamy – perfect for adding a savory skim of fat to food that are otherwise too healthy for their own good. Only a single quibble, and that’s that it’s a rather oily mayonnaise. That’s certainly not a deal breaker, just be prepared for it.

That leads us to the wasabi side of the mayo. The spiciness here is well balanced, it provides a mild kick in small amounts and a bigger one if you really lay it on, but make no mistake, this is a mayonnaise not a horseradish spread. You’re never in danger of burning your sinuses out of your head, though they might get a little wake up call.

Of course, there’s the small problem that our wasabi mayonnaise doesn’t actually have any wasabi in it. Or, more accurately, it has very very little wasabi in it, way down at the very end of the ingredient list below the spinach powder food coloring. When you have less wasabi in your wasabi mayo then you have artificial coloring, you might want to consider a different name, TJ.

Actually, as much as I’d like to condemn Trader Joe’s for barely putting any wasabi in their wasabi mayo, that’s simply the way it goes. Choose any wasabi product from your supermarket shelf and check out the ingredient list. 99 times out of 100, you won’t find any actual wasabi in the product. Real wasabi is difficult to grow – it can take up to two years to grow a mature wasabi root, and once mature it can only be harvested once. As a result, real wasabi is quite expensive – much more expensive than the simple combination of common horseradish, mustard and food coloring that almost everyone, Trader Joe’s included, uses in it’s place. It’s actually to TJ’s credit that they throw a token amount of real wasabi in here. Many less scrupulous wasabi providers (including, in all likelihood, your favorite sushi restaurant) settle for the cheap, horseradish-based variety that lacks any real Japanese wasabi what’s so ever.

Outraged? Maybe you should be – although you better check to see if you can afford real wasabi prices, currently about $20 for 2 oz. A better question might be, what’s the difference between real wasabi and this substitute?  The answer seems to be not a lot. Those who know report that real wasabi is hotter with a sweeter finish. The sort of thing a real gormund might insist on, but which is probably wasted if it’s just being mixed in with a bunch of mayo anyways.

If you an get over the subterfuge and misdirection, Trader Joe’s Wasabi Mayonnaise is still a quality mayo with a lot of flavor, and one that you won’t regret buying at the much more reasonable price of $6.99 for a 12 oz. a jar.

Would I Recommend It: Yes, this is a tasty twist on mayo.

Would I Buy It Again: I don’t use a lot of mayo, but if I was going to buy some I’d probably buy this. 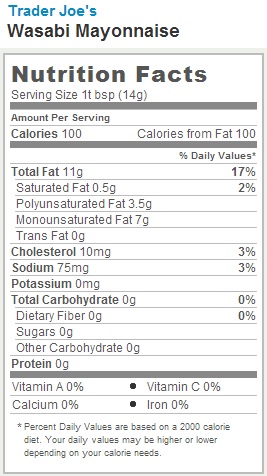