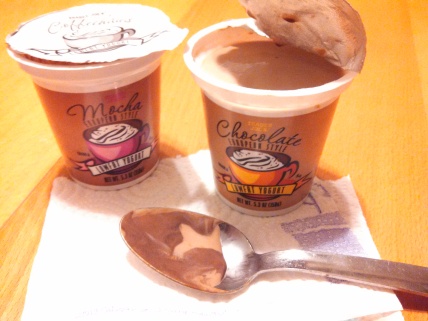 Possibly the most unwieldy name Trader Joe’s has unveiled to date. I’m not even sure I’ve got it right.

Tangy coffee – do you like it? If you can answer that one question for yourself, there will be no need to read the rest of this post about Trader Joe’s Coffeehaus “European style” low fat yogurts. I will repeat it once again – do you like the taste of tangy coffee?

Very probably you have never had tangy coffee before, you might be confused by these words – angered by them even. No problem, friend. Just relax, sit back, close your eyes… and imagine. Imagine sipping a cup of coffee, imagine that unmistakable coffee aftertaste, that bold, full-roast dark coffee flavor that sits on the tongue like burnt toast. Now imagine it’s also real tangy. Tangy like a glass of Tropicana orange drink. Tangy, tangy coffee, sitting on your tongue, and also it’s cold. Do you like that idea?

If you’ve said yes, hold on tight because we are going to get into this. If, and I’m guessing this is more likely, you said no then you can feel free to navigate away from this browser tab right now. You sir, will not like Trader Joe’s Coffeehaus yogurts because if there’s one thing they have, it’s a serious tanginess.

Let’s unspool this for a moment. There’s about five different things going on in the name of this product alone, and it could do with a little unpacking before we start laying into if I, personally, enjoyed this thing or not.

To begin, let’s start with what a “European style” yogurt might be, and why Trader Joe’s feels they need to single that notion out for some reason – not just by name, but by packaging, iconography and font as well. How, in fact, is European yogurt different from the Greek yogurts, French yogurts and Swiss yogurts which can all also be found in Trader Joe’s yougurt aisle? The straight forward, if basically uncorrect, answer is that “European style” yogurt is called as such because it isn’t going to sit well with the average American. More specifically, it’s much less firm than standard grocery store yogurt, and much more tangy due to the presence of the many live, active bacteria cultures fermenting it full of lactic acid.

Now, every yogurt in the world is a product of bacteria cultures – that’s just the basic nature of its existence, but it’s not a fact that the big commercial yogurt companies like to play up on TV here in the States. The “now full of more live bacteria colonies than ever before” pitch is just not one that appeals to the standard demographic. As such, the bacterial nature of yogurt has been downplayed to the point where it’s almost totally overlooked. For the same reason, your usual grocery store yogurt varies between “slightly tangy” and “not tangy at all”.

Much more common in the US are the standard, “custard” style yogurts where fruit and thickening agents have been blended into a firm, sugary, low-bacteria yogurt. Confusingly, custard style yogurt can also be called French or Swiss style yogurt, despite the fact that they are much more American than European in sensibility. In fact, real Swiss yogurt (yogurt made by the Swiss in Switzerland) must, by Swiss law, contain a certain minimum number of bacterial colonies to even be considered yogurt.

So, to summarize, by saying “European Style” Trader Joe’s is singling that this is going to be some bacteria-filled, tangy yogurt, and you’d better be ready for that. They are as good as their word as well – each type of their coffeehaus yogurt comes packed with four different live and active cultures: S. thermophillus, L. Bulgaricus, L. Aciodphilus, and Bifidus. I don’t know quite enough about biology to expound on what all the important differences are between these, but I can tell you that you can sure as hell taste them in every tangy, zingy bite.

The other unusual aspect of these European style yogurts are their rather continental flavors. Dannon and Yoplait may have turned every type of cream pie and sherbet into a yogurt flavor, but even they haven’t yet done a straight up mocha or dark chocolate yet. While that might not go over very well in a custard style yogurt, it makes for a very nuanced bite here. The subtle bitterness of the dark chocolate and the mocha both play against the sourness of the yogurt, the tang of the lactic acid and the gentle sweetness of the added sugar. The result is a yogurt that challenges the tongue to a unique flavor experience, not merely a confection of high sugar content sweetness that passes the gums unnoticed.

So do I like tangy coffee? In this case, yes. I’ve had sweet yogurt, and I’ve had unsweetened yogurt, but I’ve never had yogurt that takes a path separate from sweetness all together. Tangy, bitter yogurt is an intriguing development, and one that I could easily see myself enjoying on my classier mornings.

Would I Recommend It: Yes – if you’re willing to give a whole new yogurt experience a chance.

Would I Buy It Again: I’d like to think that I’m just cultured enough to do so.