Surely we can all agree on a good Thanksgiving dinner – complete with juicy turkey, stuffing and all the trimmings. But what if that dinner was served in the form of a wrap? Would that be just as agreeable? Trader Joe’s is certainly hoping so, with their sandwich, the Turkey Gobbler Wrap.

Trader Joe’s Turkey Gobbler Wrap is not the first sandwich to try and cram an entire Thanksgiving feast into a sandwich, not by a long shot. This is America after all, if there were only two thing we like they’d be commemorating our nations founding and compressing whole meals into fast-snacking cylinders. What Trader Joe’s does different from these other sandwiches, however, is loose the bread. I’ll save you some time and tell you right now: that was a misstep, but let’s take a look at what’s actually inside this wrap before passing sweeping judgement.

Turkey, as you may expect, makes up the bulk of the filling, along with a combination of stuffing, real cranberries and, surprising to me, cream cheese. This mish-mash works together okay – satisfactory, if not tasty. But who does turkey all that well in a pre-packaged sandwich, really? Who picks up a turkey sandwich, even from Trader Joe’s, and goes, “Oh boy – this is going to be some amazing turkey!” No, you know it’s going to be dry, the only question is how dry. This turkey? Only a little dry. That practically deserves praise.

The stuffing is equally satisfactory, only the cranberries really stand out as notable with their big bold flavor. Thanks, no doubt, the the fact that TJ deciced to use big, whole cranberries in the wrap.

On two slices of bread, this would be a good sandwich. Wrapped in a whole wehat tortilla on the other hand, it tastes a little off. There’s a certain taste and texture to a cold tortilla that goes wonderfully with some foods,v but just does not favors for most others. A Thanksgiving meal is just one of these that doesn’t go very well with the smooth, chewy, gluey walls of a big, floppy tortilla.

There’s another interesting facet to the Turkey Gobbler Wrap – in fact it was the reason I was drawn to it in the first place. Along with all the fixin’s in the wrap itself also comes a serving of “Festive Dipping Sauce”. That phrase is blazing brand new avenues of nebulous terminology. “Festive dipping sauce” is one of those descriptors so vauge and pointedly undefined as to be actually frightening. It’s the kind of name that’s a mask, hiding the real nature of the food you’re about to eat behind a meaningless collection of words. It’s what you do when you realize the chicken you’re serving isn’t actually an identifiable part of the bird so much as it is a slurry of heavily processed ventrical matter, so you just call them “chicken nuggets”.

Opening up the little tub, you will discover that it’s an opaque tan liquid which, on taste, strongly resemles a milky gravy. It’s not bad tasting – it might acutally be the tastiest part of the sandwich and it’s certainly a tasty way to combat the dryness of the turkey – but it’s important to remember that it’s not actually gravy. If it was gravy, you can bet they would call it gravy, in the same way that if you could get away with putting “STEAK” on the cans of meat you sell you would. That’s why the FDA has regulations for these things and you’re forced to put “Mechanically Separated Pork” on the label instead.

The “sauce” as it turns out, is a mixture of turkey broth, milk cream, sherry wine and roux (a flour/fat mixture), and while lip-smackingly good also remains strangely uncongealed even coming straight out of the fridge.

Apart from the tortilla, Trader Joe’s does a good job replicating the Thankgiving dinner – right down to the calorie count. You’ll notice the nutritional information below is only for ½ of a wrap – which means you’re getting 98 grams of carbs and 20 grams of fat along with your 800 calories. That’s an audacious wrap, people. The only aprt of the wrap that didn’t really stand out to me, the cream cheese filling, is the party responsible for much fo the fat and calories. It seems that Trader Joe’s could have subsittued this out for something lighter. As it stands, you’ll want ot substitute out the wrap for a healtheir meal if you’re concerned about your waistline.

Would I Recommend It: Not really, unless you’re jonesin’ for Thanksgiving.

Would I Buy It Again: I’d go for the equivalent 1.5 Big Macs instead.

Final Synopsis: Not bad, but not nearly good enough to justify 800 calories. 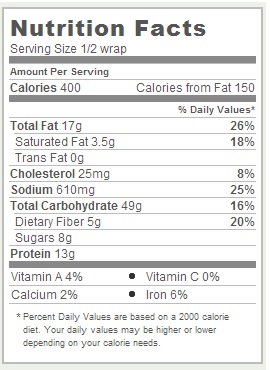 Bacon is wonderful, bacon is divine manna, and bacon has been done to death. The bacon fad (or “baconmania”), which is still ongoing as of this writing, may have died down from it’s bacon salt and DIY bacon vodka heights, but nevertheless the mad hankering for bacon continues nationwide and across the internet. It’s really not my intention to contribute to this inarticulate scream for brined slices of pork belly, good though it is. Instead, and I’m fully aware this viewpoint may well inspire incandescent vitriol among bacon purists, I’m going to try and sell you on turkey bacon – something which I eat frequently.

Why, you must be asking, why does he do that to himself? In my case, it’s a matter of simple expediency. I need to grab breakfast and get out the door in the mornings, and bacon cooks up quick in a microwave. I’d be more than happy to use “real” pork bacon for this task, if I didn’t so greatly fear it’s great gobs of drooping fat deposits. I love my poor little heart, and I’ve abused it enough already for a life time. Now is my era of healthy eating. (As you may have picked up from my previous posts I try to stick to a low carb diet. Generally I fail.)

A World Where Bacon Never Lived

So turkey bacon gives me a healthy choice for my daily bacon consumption and, and guys I’m willing to be real here, that’s all it really has to offer. Turkey bacon is a pale shade of an imitation compared to those fatty strips of pork, but in it’s nutritional profile they are worlds apart. Trader Joe’s Turkey bacon boasts of an astounding 40 calories per slice, 15 from fat. That’s less than a third of the fat that Oscar Meyer serves you with their Center Cut Bacon (70 calories per slice, 50 from fat).

In addition, TJ’s has gone fully nitrate, antibiotic and preservative free here, making it that much easier to feel good about eating bacon.

Unfortunately, a healthy profile is all there really is to recommend Turkey Bacon. Even I, unrepentant turkey bacon eater I, cannot come to endorse this product to the populous at large. It just isn’t that good, really. Maybe if we lived in a world where there as no pork bacon and turkey bacon was all we knew I might be able to muster some enthusiasm for the product – as it stands, every bite of turkey bacon is beggared by comparison to the real deal.

Warm Garbage Bag and Other Tastes

The main issue is not the taste, which is passable to tasty, but the texture, which is awful. Turkey bacon simply does not fry up crispy and crunchy like fatty strips f bacon. It remains perpetually limp and soggy whether you zap it in the microwave or sizzle it in a pan.

The regular turkey bacon comes out of this process just this side of edible, as the loss of texture is the price I’m will to pay for healthy bacon. If you’re willing to pay that price as well, like me you’ll be forced to decide between two options, regular or peppered. I’m going to cut right to the chase here because this information is important – choose regular. This is imperative. Whatever is redeeming about the taste of the regular turkey bacon is completely lost on the peppered variety – replaced by a nasty, pseudo-seasoned taste and a long, lingering after taste that resembles sucking on a warm garbage bag – truly unpleasant to the point of inediblity. The existence of this variation suggests that there must be fans of it out there, and I welcome your point of view in the comments, but as for as I’m concerned this abomination should have never been made.

Would I Recommend It: Only to those who have decided to sacrifice taste for health.

Final Synopsis: You don’t choose turkey bacon because you want a good time, but when the cards are down it’s better than no bacon at all. 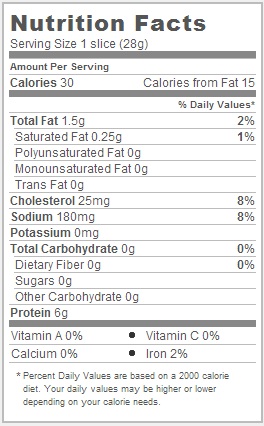 I’ve always been cautious when it comes to foods stuffed in other foods, so it was with wariness that I approached Trader Joe’s stuffed peppers with seasoned turkey and rice. Stuffing, after all, is fraught with peril. We’ve all heard the dire warnings regarding turkey stuffing and seen the gruesome spectacle of sausage stuffing. It is a mixed bag. Sometimes the rewards outweigh the dangers, and sometimes you find yourself eating a pile of gunk.

I turned to Trader Joe’s stuffed red peppers during a quest to find a cheap, easy prep, low carb, non-frozen dinner entree. A tall order, and one that Trader Joe’s has trouble delivering on. It was after a great deal of searching that I finally struck upon these. Trader Joe’s Stuffed Red Peppers may not be exactly a dieters dream, but at 11 grams of fat and 14 grams of carbs per serving they’re not too far off the mark.

I’ve come back to these stuffed peppers time and time again because it fills a gap not many Trader Joe’s products do – a dead-cheap dinner option that takes 15 minutes and no prep. In other words, with two full servings for about $2.50 each and no knowledge of cooking necessary, this is the perfect I’m-An-Unskilled-Bachelor dinner go to. I go the oven-cooked route, but it’s just as easily microwaved. In either case, you end up with something that’s not just tasty, but could nearly pass as home cooked.

The piping hot rice and season turkey spills in a moist slump over the red pepper’s wilted walls – flavorful, meaty and savory without being starchy or over-salted. The balance between turkey and rice is generously nudged toward the turkey side, which at makes this more entree than side dish. This rich filling is, in turn, balanced by the soft and very mild taste of the roasted red pepper casing.

That said, these stuffed peppers aren’t perfect. For one, the casing always collapses to some degree when cooked, making messy piles. Relatedly, the filling tends to resist becoming crisp and brown no matter how long you bake it.

Trader Joe’s Stuffed Red Pepper isn’t incredible, exotic or revolutionary, but like TJ’s Minestrone it’s something with a value all it’s now, a classic mainstay. This is the sort of meal that a mom might serve up to her family once a week – a modern-day casserole that gives the TV Dinner Set an option outside the freezer section.

Would I Recommend It: Yes, whether you’re a mom, a bachelor or just too tired to defrost the chicken.