People are willing to put dark chocolate on just about anything. While I applaud the adventerous spirit, the problem is that dark chocolate is not so universal as people hope. Just because the word “chocolate” is in there doesn’t mean it’s a confection. The strong, bitter, almost astringent taste, of a high purity dark chocolate is an acquired taste and should be introduced into a dish only with forethought. Thus it was with trepidation that I picked up Trader Joe’s Dark Chocolate Covered Edamame.

I like dark chocolate, or at least I want to like dark chocolate. I certainly like it enough on its own. The trouble is, it’s hard to find it done right. One place I seem to continually encounter it is on roasted coffee beans, which has always truck me as very strange. Obviously coffee is a good thing. Coffee keeps America running. I, for one, recently fell in love with Trader Joe’s Cold Brewed Coffee Concentrate. However coffee beans are not coffee. They are the cast off husk that we extract that essential nectar from – the thing that gets in the way between us and the coffee. Why then does it seems to anyone likea  good idea to cover the whole beans and eat them? It’s not like we eat them in any other way – nobody is throwing a handful of roasted coffee beans on their salad, or mixing them into their pasta. We grind them up and make coffee out of them or, in extreme cases, add it to steak rubs. We don’t just munch them down whole.

I bring this up because Trader Joe’s Dark Chocolate Edamame are essentially an improved form of the chocolate covered coffee bean. There’s a shell of dark chocolate around a crunchy, munchable core of dry roasted edamame.  What’s surprising to me is that really these things are pretty good.

“Now wait a minute”, you’re probably thinking.”Aren’t edamame just soybeans?” Yes, that’s true – but don’t let the rather long history of soybean bashing turn you against me right from the start. It’s true that soy beans are mostly used to make salty and savory dishes – for example, as soy sauce, miso soup, and tofu. However, anyone who’s ever had a bowl of salted, fresh soybeans at a bar or as finger food, served still in the their little green pods,  knows that they also have a very mild taste with an addicting crunchiness.

The truth is, you’ll barely taste the edamame beans in Trader Joe’s Dark Chocolate Edamame at all. They could have just as well called these Trader Joe’s Dark Chocolate Crunchers. The flavor of the heavy, dark chocolate coating is so strong that you don’t get any taste from the dry roasted soybeans at all. All you get is texture – the crunchy body and satisfying grist of the light, sere bean. The added benefit is that this snack actually has a pretty good protein content. A 1/4 cup serving contains 7 grams of protein – 49 grams in the whole container. 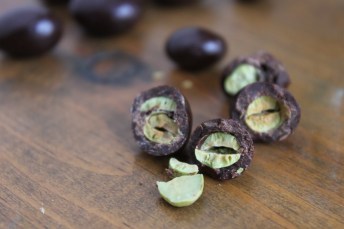 te at all. Seriously. A
quick inspection of the ingredients reveals only a mention of “semi-sweet” chocolate. Semi-sweet is a far cry from dark chocolate, sometimes containing as little as 35% cocoa. Trader Joe’s doesn’t state the percent of cocoa in these beans, but a safe bet might be  around 50%.

Normally I decry this sort of misleading wordplay, but in this case I’m actually not that upset. For one, semi-sweet chocolate is still “technically” considered dark chocolate, even if it wouldn’t necessarily be considered as such in the vernacular. Secondly, and more importantly, it’s actually a good move. Dark chocolate tends to be unpalatable quickly as the purity increases. By going with a semi-sweet dark chocolate, Trader Joe’s has succeeded in making a eminently snackable chocolate treat perfect for setting out at bridge groups, high caliber sporting events, and other informal social gatherings. A chocolate treat that isn’t too sweet, or too bitter.

Would I Recommend It: Yes, this is a fine use of dark chocolate.

Would I Buy It Again: Sure, I could see putting this out for guests.

I don’t have anything to say about Trader Joe’s Nutty Grain Salad that isn’t short and nasty, so I suppose I’d better just get to it. Trader Joe’s should have called this Trader Joe’s Crappy Peanut Bean Thing. Instead they try and tell me it’s a salad and put it next to the good stuff.

Saying that this salad tastes as bad as it looks is not entirely accurate. Obviously, it looks terrible. I’m not sure I’ve seen a mass of soy beans, peanuts, pistachios chunked carrots, and cooked spelt that looks worse than this – and I’m including vomit in that. At least vomit has the effluvium of stomach bile to cloak it’s terrible, true nature. This stuff just sits there in the open, daring you to stare directly its clusters and lumps. Go ahead and try it – see if you can last longer than five seconds, I can’t.

So to say it’s as bad as it looks is implying that it tastes atrocious, which it doesn’t. It tastes worse than that – it tastes bland. There are foods out there that I think look and taste awful which whole cultures have passionate loves for. You’re not really a country, I reckon, unless you have at least one national dish that no one else in the world can stomach. The English have Vegemite, the Scotts have hummus, the Japanese have natto, the Americans have Kraft Singles, etc. What I’m trying to say is, taste is relative, and really intense flavors may alternately repulse and delight, depending on the eater.

Trader Joe’s Nutty Grain Salad, on the other hand, is simply bland and uninteresting. The packaging claims that it is dressed with a soy ginger sauce. This is technically true, but the dressing is present in such cowardly quantities that it contributes almost nothing to the taste, beside rendering the whole mess somewhat squishy. The primary flavor you’ll experience is “soggy nuts”. There’s some nutty tasting quinoa, some peanuts and pistachios. Next to that, the edamame, spelt and carrots don’t really show up much, and when they do it’s only to add an additional dimension of blandness to the whole affair.

I could go on and on about how upset I am at this tiny little tub, but the bulk of my ire is actually reserved for the nutrition labels. Go ahead and flip this tub over, but first set your faces to “stunned”.

So essentially, what we have is a tiny little tub of stuff that looks gross, tastes like a more mild version of unsalted peanuts, and contains as much fat as a Big Mac only with more calories. It’s like Trader Joe’s figured out how to remove all the fun and enjoyment from eating fast food. There are entire galaxies of more delicious, healthful and fun meal options out there – many of them right there in the Trader Joe’s salad aisle. Unless you are in desperate need of compact, high calorie food sources (sumo wrestlers, long distance bomber pilots, roving apocalypse survivors) why you would want to go for this instead of literally anything else is beyond me.

Would I Recommend It: No, not unless you needed the final component for a robot powered by hate.

Would I Buy It Again: Only as a tip off to my loved ones that I’m secretly being coerced by kidnappers.

Final Synopsis: A bland, gross looking pseudo-salad that is bad for you.