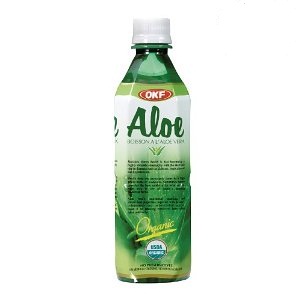 It’s hard to find a good Aloe Vera based drink in this city. Now I had better fess up to the fact that I belong in that distinct subclass of people who enjoy things floating in their drinks, the kind of guy who likes pulp in his my orange juice. Funnily enough, when it comes to peanut butter I fall firmly on the smooth side of the smooth/chunky debate, but that’s a story for another time.

You may or may not remember Orbitz, but I sincerely hope you do. Released in the early 90’s, during that time when a mass madness had gripped the populous that compelled it to produce an endless succession of gimmicky soft drinks, Orbitz was king of all gimmicky drinks. This clear soda was imbued with a loose matrix of what amounted to slime which served to kind of hold aloft “flavor orbs”, little chewy candy balls. The idea was that the balls would appear to be levitating in some sort of futuristic super soda to be cherished by all. The practical effect was that everyone hated the look and taste of Orbitz immediately. Everyone but me that is. The audacity of these floating balls immediately captured my heart, only to break it when they left me forever following the almost blindingly quick bankrupcy of the company.

Some years later, my older brother returned from a trip to Korea with the very first bottle of Aloe Vera drink I had ever seen. The weird color, the floating bits of chewy stuff – aloe vera drink immediately conqured that place in my heart that Orbitz had cleared before. My brother, a kind and gentle soul of a teenager at the time, immediately forbade anyone from drinking any of the Aloe Vera Drink but himself and certain, select friends. I didn’t care. Tip-toeing up to the refridgerator at a moment when the house was absolutely empty, I snuck my first sip. The taste was more wonderful than I could have imagined!!!! I immediately forgot all about Orbitz – Aloe Vera Drink would be my new refreshment king. Go to hell, Orbitz! Rot and die, for all I care. Aloe Vera drink would be seeing to all my needs from then on.

Unfortunately, I had to cut my felonious aloe vera sipping to an absolute minimum, lest I incur the vicious, teenaged wrath of my older brother. Always since that day have I searched the shelves of our bland America stores in hopes of finding an aloe vera drink that did that one justice. Always have I been disappointed. Worst of all, is to find over and over again that malicious, deformed contender El Sol brand Aloe Vera Drink. Looking in all the unseeming ways like authentic aloe vera drink, El Sol masks any enjoyable aloe vera taste with a heavy grape flavoring. What the hell, El Sol? Let the Aloe Vera speak for itself, man – dare to taste its beauty. The consumer public can handle it.

This old quest was rekindled when I happened across OKF Organic Aloe Vera Drink at Trader Joes. This product deserves full high marks on many fronts. It keep additives to a minimum (no preservatives, artificial flavors or coloring), uses organic aloe, includes plenty of aloe vera bits into the drink along with aloe vera gel itself. Was it good enough to do to that Korea Aloe Vera Drink what Korean Aloe Vera Drink did to Orbitz? Alas, no. Aloe Vera Drink ventured too close to bland for me. There is no sugar added which means while there are only 60 calories per serving it tastes more like water than soda – similar to the new coconut water beverages. So while it may not have been what I was looking for, it was the most enjoyable Aloe Vera drink I’ve had in years. I give it my full recommendation to people looking for a healthier alternative to soft drinks or just a new beverage to try.

Would I Recommend It: If you’ve never tried an aloe vera drink, this isn’t a bad one to get started on. For everyone else, this is likely to be the healthiest aloe vera drink you’ll find.

Would I Buy It Again: It’s not perfect, but I predict I’ll be coming back for more.

Final Synopsis: Let’s the aloe vera speak for itself, but doesn’t have quite enough to say.