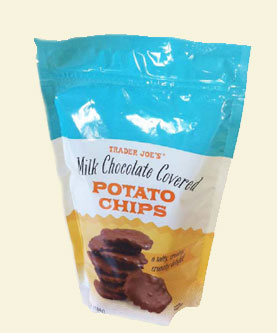 After yesterday’s disastrous beet and purple carrot juice, I thought I finally thought I had had enough of seemingly preposterous food pairings. Why not judge a book by its cover? You might be wrong every now and then, but you’ll be right about 95% of the time. Surely I could live with that, right? I was fooling myself, of course, as I said before the unknown allure of seemingly insane couplings holds an irresitable draw for me. Here it is, the very next day and I’m back at it again with a treat that couldn’t sound worse to me on paper.

Chocolate covered potato chips. Honestly, I’m surprised this combination even crossed anyone’s mind to begin with. The name easily evokes the sloppiest, laziest summer days of youth when, with one hand, I might casually shove a handful of chocolate into my mouth then supplement it with a handful of chips from the other, not bother with all the effort of clearing my esophagus in between. Homer Simpsons’ famous Gum & Nuts comes to mind, along with any number of childhood’s boderline creations (popcorn and ketchup, apple butter and ice cream). In other words, I was ready for mediocrity at best.

Consider my gob smacked when I actually tried these things. The sweet taste of milk chocolate melts seamlessly into the salty kiss of the potato chip, all bound up in a pleasurable crunchy bite. All but overwhelmingly delicious, this crazy confection literally sat my ass down. After crunching the initial test chip my tongue quickly cited that well known edict “This Is Effin’ Good!” and summarily took charge of all cognitive and motor functions, pleasuring itself with chip after chip. It was only through a great exercise of self-control later on that I was able to salvage about half the bag. We’re talking dangerously good folks. Salty, crunchy and sweet altogether, without being too much of one or another – this chip had everything that I didn’t even know I was looking for.

No downsides here, but maybe a couple suggestions. These came packaged in the same way as Trader Joe’s Dark Chocolate and Peanut Butter thingies, which is to say with no consideration for the inherent meltiness of chocolate. No problems yet, but it’s just not a good idea to sell chocolate all jumbled together in a bag. Also, the bag is quite small, but I’m inclined to consider this a good thing at the moment since these things are guaranteed diet-killers. Overall though, these chips are a sweet, secret surprise.

Would I Recommend Them: Yes sir, I would.

Would I Buy Them Again: So long as I’m not worried about sticking to a diet.

Final Synopsis: Chocolate and Potato Chips – the definition of synergy.