Have you ever eaten a dried grape that’s not a raisin?

Before I bought these, I stood in the aisle for a few moments staring at the bag and trying to contemplate exactly what freeze dried grapes would be like. Not raisins, I was sure of that. Raisins are, of course, not freeze dried but slowly dehydrated over a period time by heat –generally laid out in the sun by red-bonneted Andalusian girls, if the iconography of Sun-Maid is to be believed.  So I knew they wouldn’t look like raisins – but what would they be? For the life of me, I couldn’t image how you could both dry out a grape, and have it not look like a raisin. This irresolvable thought it my head became compulsion enough to pick up the bag and take it to the check out.

Probably a lot of you won’t be surprised to hear that a freeze-dried grape looks almost exactly like an ordinary grape in size, shape and color. The freeze drying process, a process by which the temperature of the grape is dropped to -100 degrees Fahrenheit, then a near total vacuum is created around it causing the frozen water inside to vaporize directly into a gas (all done in a hefty piece of machinery unimaginatively called “freeze dryers”), simply removes the water from the grape, while leaving its form and structure intact. The big difference is that instead of being plump and juicy, the grape is now hard and crunchy. Overall, the texture is very similar to that of a malted milk ball. It’s beyond my knowledge to tell you how a juicy grape, which is more than 81% water, manages to stay the same size after all the water has been whisked out of it, but I can tell you that it makes for a tasty, if very odd snack.

Why freeze-dry grapes? Beyond the novelty of doing so, I’m not sure there’s a good answer. They do taste sweet – but, not particularly sweeter than grapes or raisins.  On the other hand, as a result of the freeze drying process they are considerably harder to eat. The freeze dried grapes are sticky and tacky to the touch, due to extruded sugars crystallizing on the skin, making them hard to eat by hand. The actual eating is difficult as well – crunching down on a freeze dried grape pulverizes it into a sweet, crunchy dust (again, similar to malted milk balls) but unlike malted milkballs the sugar fuses quickly with your natural saliva to cement itself to your teeth. Despite the sweetness, and the novelty of the format, after three or four of the grapes I found myself entirely able to put them away and move on to something else.

It’s not these freeze-dried grapes are bad or unpleasant in any way – both the tackiness and binding nature of the fruit are forgivable sins, they just seem to be unnecessary. Grapes are easy to store, transport and eat, as are raisins. Both also lack the tendency of freeze-dried grapes to grow soft and soggy if left out of an airtight container for more than a few hours.  This same quality makes it hard to imagine using the grapes in cooking or baking, apart from perhaps, grinding them up and using them as a replacement for sweetener or a topping of some sort. The obvious route might be to try adding them to a bowl of cereal, but in such a circumstance I can’t help that feel that I’d rather just add some raisins, or have some regular grapes on the side.

A final quibble is that for three bucks, you’d hope to get more than 1.2 ounces of product. If they were priced to compete with their cousin the raisin  these would be a reasonable alternative, but as they stand Trader Joe’s would be better off positioning freeze-dried grapes as novelty products instead of simply sticking them on the dried fruit shelf.

Would I Recommend It: Only to the shopper who craves novelty.

Would I Buy It Again: If I can think of a reason to, sure.

Final Synopsis: An interesting, but not compelling, crunchy grape snack. 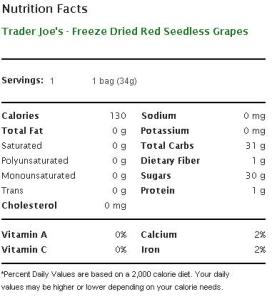