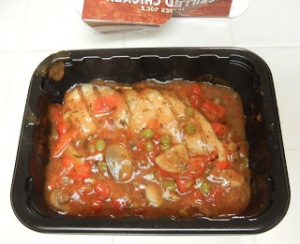 I have to say, I’m let down by this dish. When I picked up Trader Joe’s Grilled Chicken Cacciatore I was intrigued – it looked good in that picture on the label, all nicely grilled and swimming in a simmering red sauce. The name had a nice ring to it too – cacciatore. It sounds like the ultimate, all purpose Italian word, as if somewhere on the coast between Naples and Florence sits a small town where, even now, a plump matriarchs hang out their windows shouting “Cacciatore!” at the children who run off through the cobbled streets with their soccer balls, laughing “Cacciatore, cacciatore” over and over as they burst past the local pizzeria. “Cacciatore!” shouts the friendly, mustachioed, dough twirling baker.

In actual point of fact, “cacciatore” translates as “hunter”. The connection, allegedly, owes to the fact that it was originally a dish cooked for hunters who returned home without catching any game thus forcing the wife to resort to a chicken stew cooked with the mushrooms he had collected while out in the forest. This origin story is so tortured and improbable that, in light of the insane word histories of linguistics, it is probably true and, moreover, makes a good case for just giving up on language all together.

Romantic notions and etymology aside, I’m a big fan of Italian food – or of any cuisine that makes liberal use of bubbling cheese and fresh baked bread – and was truly excited that Trader Joe’s was offering up a quick-to-prep and very cheap slice of the Italian culinary world. After all, what’s not to like about grilled chicken in a hearty sauce?

Well, in this case, quite a lot.

The cacciatore’s greatest failing, like the acting of Tobey Maguire or McDonald’s, is its mediocrity. The chicken, despite actually appearing to be grilled, is completely unexceptional, while the sauce it’s served in simply tastes so-so. There seems to be an attempt to make up for the generic sauce by providing a huge quantity of it – enough to totally drown your plate in certainly. This tactic fails to salvage the dish. This is a far cry from the hard won excellence of the equally Italian Minestrone – and when it comes to your hard scrabble dinning dollars, there’s nothing to recommend it over the far superior dishes of steamed Hake, stuffed red peppers or even the quinoa and squash salad.

A final note on the preparation. TJ’s suggests two different methods for cooking up your cacciatore – either a quick stint in the microwave, or 25 minutes spent boiling the plastic bag on your stove top. Out of sheer American optimism I decided there must be some hidden merit to the bag-boiling method and undertook it. Rest assured that there is not.

Would I Recommend It: I would, if there was anything to recommend it by. (Which there isn’t.)

Woudl I Buy It Again: No sir.

Final Synopsis: A plastic-wrapped piece of mediocre chicken in a sea of unexceptional sauce. 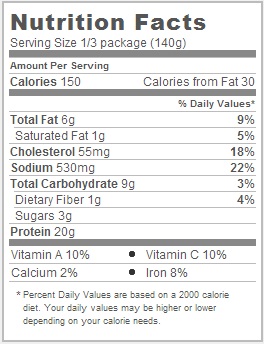