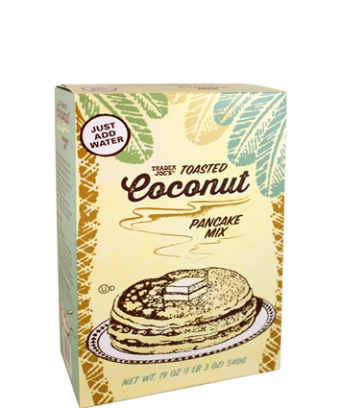 Coconut seems oddly out of place in November, doesn’t it?

There’s never been a shortage of pancakes with stuff mixed in. Just pop your head into a Denny’s any given Saturday – pancakes with blueberries, pancakes with banana, pancakes with walnuts or pecans – the list goes on. However, never before now have I seen anything like Trader Joe’s Toasted Coconut Pancake Mix. For some reason, no on has really bothered to mix tiny bits of crisped, sweet coconut into pancakes – and that’s surprising because the results are quite good.

Trader Joe’s starts things off with an amazing new pancake mix. Instead of their ordinary buttermilk pancake mix that requires eggs, milk, etc, this new mix requires nothing but a little water. On to this they throw in a good helping of crunchy pieces of toasted coconut. The result is super easy to make pancakes with a natural sweet crunch to them.

Pancakes are one of those delicious breakfast foods that everyone can agree on. And when I say everyone, I mean world wide. Some sort of pancake variation has been, at various points throughout history, invented indepedentently on every continent except Antarctica. From Ethopian injera to Tamil uttapam to Swedish pannkakor to the American flapjack, batter sizzled up in a griddle and served hot has become something of a worldwide staple. Of course though they may all share the name, the pancake varies widely from iteration to iteration. Sweet, savory, thick, thin, round, flat – the variations know no end.

Here in the States, the main pancake question is whether or not you’ll be getting thick and fluffy ones, or thin, crepe-like ones. This can be a thorny questions, with fans coming down firmly in favor of both types. Trader Joe neatly side steps the issue by providing directions for both kinds of pancakes on the side of the box. In fact, TJ couldn’t make preparing these pancakes any easier. The mix is all inclusive, all you need to bring to the kitchen is the water, and the pancake mix does the rest – no eggs or milk necessary.

Of course, this magical convenience is only possible because the mix includes dry, powdered milk and egg in the batter mix. While in theory these dehydrated and canned ingredients should be inferior to adding the real thing, in practice I found that the pancakes didn’t really suffer from it. In fact, these pancakes are just as good any you’ll get from any other off-the-shelf boxed mix. Depending on the proportion of water to batter you control how fluffy/dense your griddle cakes come out – from full-blown fluffy flapjacks to the paper-thin Swedish style and anything in between.

What really sets this mix apart, of course, is the toasted coconut. Joe doesn’t skimp on this part of this mix, and you can expect every bite of your pancake to contain at least a touch of crispy coconut. The coconut does two things for the pancakes, both of them sublte. The first is that they add a bit of unexpected texure. After coming off the griddle the bits are postivley crispy, and give the flapjack a bit of extra, crunchy bite. This isn’t necessarily a big selling point, but it didn’t really bother me much either.

The more subtle effect is on the taste. The toasted coconut infuses the pancakes with a light coconut taste. Noticeable, but not so heavy that it leaves you smacking your lips or anything. It’s more of a low key sweetness, a light touch that is easily lost under a moderate amount of maple syrup or butter. That said, they’re sweet enough from these coconut bits that you’ll probably find you’ll want to use less syrup than usual. In fact, in the best tradition of bluberry pancakes, the coconut is nearly sweet enough that you might consider forgoing syrup at all. Almost, that is, but not quite. After one pancake without syrup, you’ll probably reach for the Aunt Jemima’s

In the end, these are perfectly ordinary pancakes with a little novel touch of coconut to them. How much that sells these for you depends on how much you like coconut. There certainly aren’t any flaws to the mix, but it’s also not something I would feel compelled to buy again just for the sake of getting a little more coconut in my breakfast. Out of everything the mix has to offer, it’s actually the ease of preparation that sells them the most. Being able to whip up tasty pancakes with just a bit of water was downright enjoyable.

If TJ’s starts making more pancake flavor variations with this same mix I’ll happily pick them up. Until then, this box will probably last me quite a while.

Would I Recommend It: Sure, the sweet coconut is a natural complement to the pancake batter.

Would I Buy It Again: No, probably not.