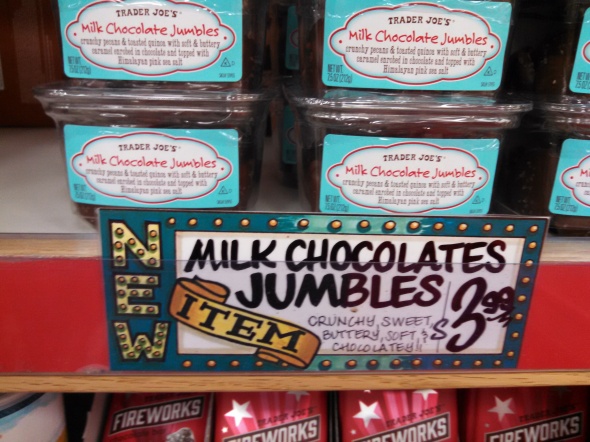 I feel this is a missed opportunity to call them “Jumbo Jumbles”. Seems like something Trader Joe’s would go for.

Ah yes, the jumble. One of the lazier forms of organization on the books. It’s right up there with the heap and the mess in terms of ways people don’t like their things to be. There’s just not much cachet to a jumble. So what lead Trader Joe’s to just sort of jumble some chocolate and stuff together instead of delivering it to the customer in a precisely thought through execution – like they did with their strictly ordered triple tiered chocolates? I must admit, I don’t actually know – but I will tell you that Trader Joe’s Milk Chocolate Jumbles are downright delicious.

Aside from the intriguing name, what attracted me to these candy jumbles was the ingredient list. Listed right up in there, right next to milk chocolate and caramel is quinoa. Toasted quinoa. Also Himalayan salt. Okay, TJ, now you’ve got my attention. You may have dozens of chocolate-covered after-dinner treats available to me – but only one has quinoa in it. Depending on your viewpoint, that’s either a stroke of desperation or brilliance.

Why in the world, after all, would you try to shoehorn quinoa into a chocolate confection filled with gooey caramel? Quinoa and chocolate occupy opposite ends of the nutrition spectrum. I would think that they would have annihilated each other when they came into contact. In fact, I wouldn’t be surprised if this was the first time anyone has ever tried mixing caramel and quinoa together.

Well, I’ll tell you this much – all the hypothetical people who decided not to do this before – it’s your loss. The toasted quinoa is a delightful part of this little snack food. Before I get into the why’s and wherefores of that, though, we’d better take a look at our jumble as a whole.

You might not be sure what you’re getting into at first glace. Any manner of strange and surprising items could be lurking beneath that rich, milk chocolate coating. It could easily be chewy, hard, salty, filled with hidden nuts, baked like a brittle or as hard and unyielding as an over-cooked cookie. You just can’t tell that much from such an ambiguous lump.

The fact of the matter is, on your first bite your teeth will sink right into a sweet, dense core of caramel. There’s no hidden, solid substrate to this little trifle – it’s pure, pliable, yielding caramel all the way through. Or almost pure, I should say. This is where the toasted quinoa comes in. Little did I know that toasted quinoa tastes and acts pretty much just like toasted rice. Nothing of the distinctive taste and texture of quinoa remains – instead it has become a light, crispy, crunchy bit of pleasing texture teasing the tooth here and there and lending the jumble a bit of much needed body. Unlike toasted rice, the toasted quinoa is much smaller, and as a result it works much better in this small treat – never interrupting your bite, but just kind of sitting there, in your mouth, crunching up pleasantly between your teeth.

While the quinoa is fine and completely inoffensive, the real star of the show is the sprinkling of Himalayan salt. Why it needs to be Himalayan salt, I don’t know – but I can tell you that it takes the jumble to a whole new level. If you’ve never tried salted caramel before, or salted chocolate, you’re missing out on one of life’s great flavor sensations. Nothing accentuates and compliments the rich sweetness of cream and sugar like a few well placed grains of salt, and here it adds an entire new level of richness to what would otherwise be a simple little treat.

The only real problem, as far as I’m concerned is that the salt distribution on the jumbles is very erratic – some jumbles have no salt, while others have plenty. The jumbles without salt on them are fine and good – it’s just that the salted ones are what really make this worth picking up.

Trader Joe’s Milk Chocolate Jumbles are aimed at the buyer who is looking for a decadent chocolate treat without any of the pretension (and inflated price tag) that so often goes along with that. They’re certainly not going to make you any thinner, but if you’re looking for a novel new way to intake caramel and chocolate, these aren’t a bad choice.

Would I Recommend Them: Yes, if you like really sweet sweets.

Would I Buy Them Again: I would if my willpower was stronger.

Final Synopsis: Don’t let the quinoa worry you – these are all about the salted caramel and chocolate.