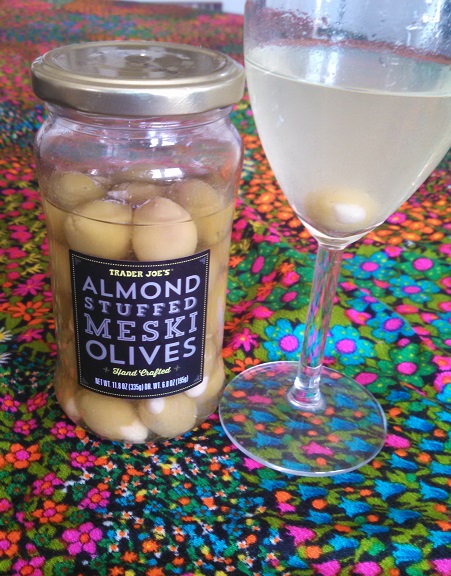 And so we return to the world of stuffed olives, with Trader Joe’s Almond Stuffed Meski Olives. The last time we traipsed into these briny grounds was with Trader Joe’s Seriously Stuffed Peppers with Olives, Capers and Garlic which – now that I think about it – one, isn’t technically a stuffed olive but an olive which has been stuffed into something and two, didn’t actually involve brine. Damn, so close.

As the above paragraph may indicate, yes – I am currently drunk. Not just because it’s before noon on a Sunday, but actually and in fact for very important research reasons. You see, when I bought this intriguing sounding olive garnish I though there might be something really interesting going on with it. As it turns out, they are pretty much just olives stuffed with almonds – not too much to add. So to up the ante, as it were, I’ve been making martinis.

Unlike the stuffed peppers, or some of Trader Joe’s other stuffed offerings, I was relieved to find these weren’t packed in oil but just your standard salty, olive brine. Another relief was to discover that the meksi olives themselves are shockingly mild. When I think of green olives, I think of the pimento stuffed cocktail variety found, most frequently, at my grandmother’s house during get togethers. Salty little bastards that kick your butt after about one and a half olives.

In comparison, Trader Joe’s stuffed meski olives are gentle delights – briny, to be sure, but mild enough to munch away on by the handful. Certainly mild enough to be broadly appealing to party goers. Stick some toothpicks in these and I’d you’ll have yourself an intriguing hors d’oeuvre.

Whether this mildness of taste is a property of the stuffed almonds or not, I couldn’t say. In either case, they certainly make a nice accompaniment. The nuts are a touch bland, but they balance out the stronger flavor of the olive while lending it some considerable heft and crunch – something to really chew on, rather than pop in the mouth.

Overall, it’s a little olive revelation – I’d never considered buying olives as a garnish before, but I’d certainly think about picking these up again in the future.

Of course, when it comes to garnishes, there’s one other famous use for olives – the martini. Trader Joe himself suggests tippling it up with these olives right on the label – either as a cocktail garnish, or with the brine for a dirty martini “like no other”. See, it all comes full circle.

While TJ doesn’t go on to substantiate that last claim, I just so happened to have enough gin and vermouth laying around the house to consider putting that claim to the test.

So here I am, sipping on an extremely dirty cocktail, essentially attempting to savor olive brine mixed with a punishing liver toxin. It is only as I lift it to my lips that I remember, oh yeah, martinis are terrible. Or they certainly are the way I prepare them. 6 parts gin to 1 part vemouth, per the standard recipie, with 5 or 6 spoonfuls of olive brine. Simply terrible – like a punch straight to the liver. There actually seems to be more in the glass each time I sip from it. Hundreds of ounces of harsh gin (top shelf, Beefeater – absolutely murderous) with a sassy little olive flip.

If only I could stop drinking it. Of course, Momma didn’t raise no quitters.

At any rate, I subscribe to that school of thought which says, if a lot of people like something, but I personally don’t see any merit in it, I’m probably missing something. Maybe it’s just an acquired taste? and polishing off this glass will clarify my understanding? However at this point, three quarters of the way down, it seems unlikely. I suppose it doesn’t help that I prepared it in a big honking wine glass.

A dirty martini “like no other”? No, I’m afraid I can’t independently verify that. Brine-wise, this seems to be just as good as any other olive brand you might like to pick up. In terms of garnishes, however, I’d have to give it an enthusiastic thumbs up.

Would I Recommend It: Yes – a very gentle and tasty olive.

Would I Buy It Again: I never thought I’d say this about stuffed olives, but yes.

Final Synopsis: These olives are good, and I’m drunk. 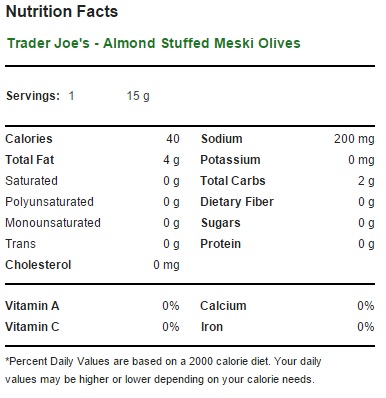