Making due on an overdue promise I made when reviewing TJ’s excellent Pizza Veggie Burgers, today I decided to try out Trader Joe’s Vegetable Masala Burger. What I got was a tasty bit of Indian cooking in a strange new form.

These two burgers, pizza and masala, are closely linked despite their completely different tastes. Obvisously they are both veggies burgers, but more than that they are veggies burgers that refuse to conform to the standard veggie burger model. Like Trader Joe’s Pizza Veggie Burger before it, the Vegetable Masala Burger has dared to ask the question, what if a veggie burger didn’t try to taste like a hamburger at all? It’s an ingenious solution that sidesteps the pitfall of trying to ape in greens what meat already is. You’re never going to out burger a burger with condensed tofu, the only way to win is to not play the game in the first place.

This is the highest form of vegetarianism, the food item that’s not a “meatless” version of something else, not a substitute or alternative to the mainstream, but a unique and delicious meal in its own right. You’re not giving something up to eat this burger, you’re getting something new.

Before we get into what I think was strange about the burger, I’d better give you a run down of how it tastes. Masala simply means “a mixture of spices” and the term is used throughout south east Asia. The masala Trader Joe’s uses here is mysteriously only described as “spices” on the ingredient label, but from the taste of it all the usual suspects are here. Tumeric, cardamom and cumin all mingle with the hearty mixture of veggies, which very visibly includes potatoes, carrots, green beans and bell peppers. The resultant patty is dense, and redolent of spices when lightly toasted on the stove. It both looks and tastes like a hearty vegetable soup without the soup. In particular, the veggies are all soft and toothsome, a pleasure to eat even if the patty tends to disintegrate too easily while you eat it. As for the spices, they’re strong enough that they give the burger a warm and authentic flavor, but mild enough that you might consider dressing them up with a condiment – be it ketchup or chutney. Another selling point, and relief to veterans of the veggie burger world, the masala burgers don’t include soy of any kind, relying instead on breadcrumbs to bind the veggie mix together.

What’s strange to me is that they market these as burgers at all. Where Trader Joe’s pizza burger tried to at least give you the semblance and feel of a burger, the masala burger goes complete off the beaten path. From taste to texture, there’s nothing particularly “burger-y” about these burgers beyond the fact that they’re puck shaped. It’s even stranger when you regard the huge bits of potato and other vegetables roughly shouldering each other right up there at the surface. The veggie pizza burger sort of managed to look like a burger from a distance. With such large and vulgar vegetable chunks, these masala burgers wouldn’t fool a near-sighted sloth.

It almost seems unnatural that Trader Joe’s has forced the vegetables into this shape at all. The way the whole thing comes apart as soon as you stick a fork in them makes you wonder exactly who we’re fooling by going through the trouble of corralling them into a burger shape in the first place. They might more accurately be called Trader Joe’s Cooked Indian Veggies That We Packed Into A Cylindrical Shape, although I suspect that may not have gotten past the Marketing department. Trader Joe’s may have hung onto the name, but make no mistake – these burgers defy the genre in every other way.

Would I Recommend Them: Yes, to vegetarians and carnivores alike.

Would I Buy Them Again: Probably not, honestly. I’ll eat burgers for my burgers and enjoy my Indian food on a plate.

Not quite a burger and not really a pizza, but something new and interesting.

Pizza in a burger, folks. Think about that. Has it really taken us this long to combine two of America’s favorite foods into one delicious food? Isn’t that strange? What’s even stranger is that it took Trader Joe’s Pizza Veggie Burger to do it. I myself am an unrepentant carnivore and steer clear of the veggie burgers unless a particularly whimsical spirit seizes me, nevertheless I am a huge fan of these. Go pizza burgers! Show us the way to a better future!

All the veggie burgers I’ve had in my life to this point have been a disappointment. When you get the hankering for a nice, sloppy burger it’s never satisfying to sit down to a heavily processed mass of tofu studded with whole peas and corn kernels. I always have been disappointed, and I expect I always will be in the future (Trader Joe’s excluded) for the simple reason that veggie burgers are playing a losing game. Vegetables simply cannot replace meat. They are beautiful and wonderful in the own right, but even the absolute best slice of marinated seitan is going to come second to a middling steak. Yet for some reason vegetarian food providers return to the well of ersatz meat products – foisting not just veggie burgers, but tofurky and chik’n and vegetarian bacon and countless other so-called “meat analogs”. It’s this sort of weird fixation on replicating meat that turns so many of the vegetarian-curious away from the shores of meatlessness. Try as you might, a soy protein patty isn’t going to be mistaken for a ground beef patty.

On the other hand, vegetables can do all sorts of excellent things that meat can’t. Where vegetarian cuisine embraces it’s flexible, malleable and adaptable nature it champions greatly. There are a million ways to cook delicious vegetarian meals that don’t resort to imitating meat products – take the world of Indian cuisine for instance. There’s no reason that a veggie burger has to try and force itself to taste like a ground beef burger – by branching out into a world of other interesting tastes, in this case pizza, Trader Joe’s flips the game on its head by setting its own standard of success. It’s not trying to be a regular burger – it’s trying to be a pizza burger, and on those grounds it succeeds.

Trader Joe’s Pizza Veggie Burger is made from a big chunk of reconstituted soy protein, yes, but it’s also chock full of tomato, basil and melted mozzarella cheese. Yes, it is as good as it sounds.

Two things really work to sell you on these before you get to the taste. First is the color, while most veggie burgers are a variation on beige, the pizza burgers are a dark, almost incarnadine red, thanks to the tomato infusion. Second is the smell, which is very reminiscent of cheese pizza.

I zapped my burgers in the microwave, and they came out piping hot and smelling great after a couple minutes. I added the usual burger toppings and a bun, and the first bite turned me into a fan. These pizza burgers don’t taste like your usual burger, but they don’t taste like a veggie burger either. They occupy their own unique space – moist, chewy, and really bursting with the flavors of a margarita pizza. I was particularly impressed by the texture, which held up well, felt natural and didn’t crumble or fall apart during either cooking or eating – a typical weak point of vegetable patties.

Unlike their rather unfortunate attempt to make a new type of sushi, Trader Joe’s can chalk their pizza burgers up as a solid success. They are a delicious alternative to beef and vegetable burgers alike, and a real contender for my future barbecuing purposes.

Would I Recommend Them: Yes, to vegetarians and meat-eaters alike.

Would I Buy Them Again: Yes. In fact, I might choose them over beef patties.

Final Synopsis: An tasty melding of pizza and burger that does vegetarians proud. 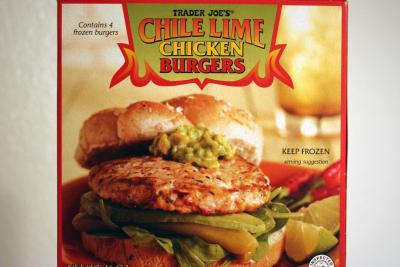 Unless they are using the chili variety of lime (and I assure you they are not), these are not grammatically correct burger. Tasty though.

I would call myself very satisfied with these. Chicken burgers are a well known delicious healthier, lean alternative to ground beef. However, it has also been accurately accused of being a blander alternative as well. The chili and lime flavoring did a phenomenal job compensating for this – zesting the chicken with a flavor that gets the mouths of everyone in the room watering. I actually had to fend off overly ardent admirers of my browned burgers as I ate them. The patties are flavorful without going overboard. I went into these mostly worried that the chili-lime balance would be skewed too far one way or another, but I needn’t have. The chili packed a kick without being too spicy, and the lime was zesty without being too citrusy. A good taste for a fresh burger, or any light, summery dish. Combined with the shockingly healthy nutritional profile (on 6g of fat per patty) these burgers roar to the top of the Taste To Health Quotient.

Other positives – the packaging is tight, efficient and easily storable, and the wax paper in between the paddies ensured ease of separation. The only real downside? No cooking instructions on the box. I’m kind of a numb nuts when it comes to intuiting the way to cook things. Though I enjoy cavalierly disregarding the instructions for most things, I assiduously pore over any meal preparation tips. For the chicken burgers, not being something I am overly familiar with, I was particularly looking forward to a little help, but was left in the lurch. I just sort of cooked until they browned, and although this mostly worked out I did over cook one of the four patties. For shame Joe! To paraphrase an episode of the Simpsons, stupid cooks need the most attention.

Would I Recommend Them: Yes, but look up the cooking instructions online.

Would I Buy Them Again: I could see it.

Final Synopsis: A little zing-pow in your chicken burger.