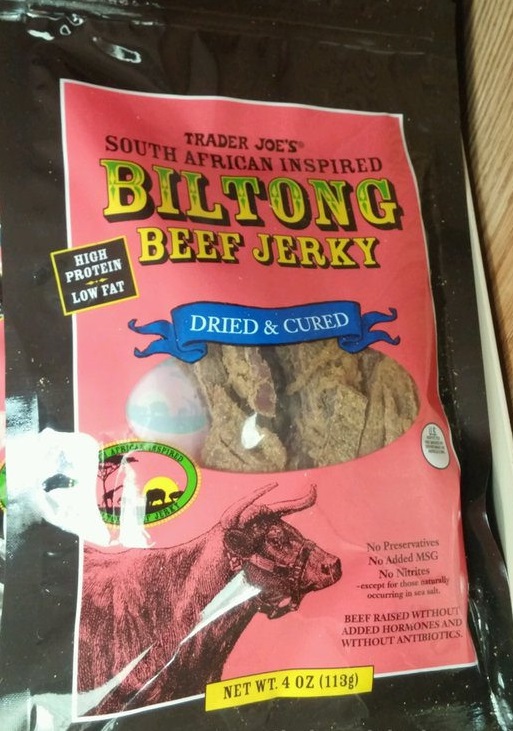 Trader Joe’s has unleashed some strange jerkies on the world already – the unusual salmon jerky and addictive sriracha bacon jerky both spring to mind – but Trader Joe’s new South African-inspired Biltong Beef Jerky has got to be my new favorite. With a more nuanced and flavorful mix of spices, and thicker, more robust slices of beef, this jerky elevates a classic snack to a new level.

Biltong, as the bag will tell you, is from the Dutch bil and tong meaning, literally, “rump strip”. The Dutch name reflects the origin of the recipie. The notion of drying cured meat strips had been native to South Africa since time immemorial – but the arrival of Dutch settlers brought the notion of spicing the meat with black pepper, coriander, sugar, salt and vinegar – putting the jerk into the jerky, as it were.

The result is something extremely beef jerky like… and yet not. At first blush, beef jerky and biltong jerky are damn similar – after all they’re both beef, they’re both spiced and dried – but they vary in small, interesting ways. The first thing you’ll notice is that the biltong is narrow but thick – about half an inch wide and nearly that thick. It’s a much more orderly snack than your usual, raggedy, crumbly pile of wafer thin beef jerky – easier to eat and easier to share.

This same thickness gives the biltong jerky an amazing chewiness. Where ordinary beef jerky tends toward dryness, biltong tends toward juiciness. One strip will give your jaw muscles a full on work out. Once you’ve popped a strip in your mouth, however, you’ll quickly notice something else.

The blend of spices and flavors marinating the biltong is subtly different from most beef jerkies. While Trader Joe’s plays coy with the exact mix in their description – calling it a “family secret” – the result is a taste that is less intense than ordinary beef jerky (which, as we know, often tends toward extreme flavor profiles), and since it hasn’t been smoked the flavor of the meat itself is more apparent. Aside from the expected saltiness of the biltong, there’s a gentle pepperiness along with a faint fruitiness (thanks to the apple cider vinegar used in the curing process) and perhaps even a hint of floral notes – from Trader Joe’s Flower Pepper perhaps?

In any case, the resulting biltong is a whole new take on ordinary beef jerky – with thicker juicer slices, and an equally savory, if more subtle, flavor palette.

Would I Recommend It: Yes, a definite must try for jerky fans – enlightening.

Would I Buy It Again: Absolutely, I love a good jerky. 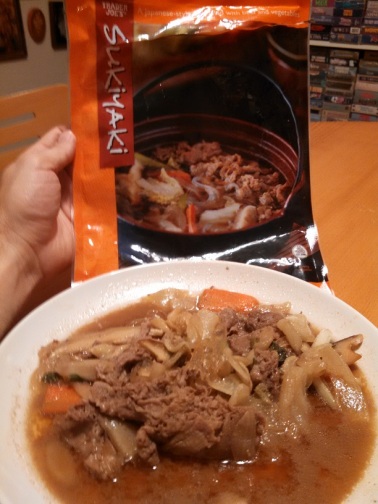 Mmm…look at all that gobo!

I really hope you’ve had sukiyaki before, but if you haven’t, here’s the breakdown. Sukiyaki is a stew like dish, made with thinly sliced beef some noodles and a selection of super Japanese vegetables including Napa cabbage, spring onion (negi), shitake mushrooms and gobo. “Gobo” translates to “burdock root” in English, but unless you’ve actually had burdock root, that probably doesn’t tell you much. Basically, gobo is a long, slender root with a taste part way between carrot and potato, generally eaten after being boiled and shredded.

These ingredients are cooked up bubbling hot in a rich soupy broth made of soy sauce, mirin, and sake. Mirin, being a much sweeter, much less alcoholic form of sake, gives the dish it’s trademark semi-sweet flavor which acts as counterpoint to the savory meatiness of the dish. In short, it’s a hard meal to get right – particularly if you’re trying to figure out a way to flash freeze it, and sell it across the nation for $6.99 a bag.

The word “sukiyaki” is Japanese for “???”. Everyone can agree that “yaki” definitely means “cooked” (as in, teriyaki, teppanyaki, yakitori, etc). It’s the “suki” part that there is no general consensus on. It’s either translated as the noun “shovel”, or as the verb “to make thin”. The verb is explained through reference to the thin slices of meat. The “shovel” claim, on the other hand, is backed up by awkwardly contorted and dubious historical scenarios, one involving a peasant who was so ashamed of his inferior kitchenware that, when a guest showed up at his hut by surprise, he decided to clean off his shovel and cook on that. I hope it’s obvious which translation I prefer to believe.

Even if you haven’t had sukiyaki before, you’ve probably heard the “Sukiyaki Song” at least once. Performed by Kyu Sakamoto, the Japanese Dean Martin, way back in the 1960’s, this happy little ditty rocketed to #1 on the billboard charts in America – a shocking fact given that there isn’t a word of English in the whole song.

Pedants and know-it-alls are quick to point out that the so-called “Sukiyaki Song” actually has nothing to do with sukiyaki at all, and is in fact a heart-rending ballad of a love lost forever saddled with a silly name by savvy American marketers. What these blowhards fail to grasp, however, is that due to the grammatical quirks of Japanese the subject of Kyu’s doleful crooning is never explicitly stated. It’s entirely possible that the love Kyu mourns is, in fact, a really good bowl of sukiyaki that he’ll never have again.

So how does Trader Joe’s Sukiyaki stack up? Although TJ’s make an admirable effort, their sukiyaki just doesn’t quite cut the mustard. They make their first misstep before you even open the bag. Normally, sukiyaki is made with thick, hearty noodles like udon or chewy “jelly” noodles made of firm konyaku. Not so here – instead Trader Joe’s uses thin, flat, glass noodles made from mung beans. That may sound like a subtle difference, but the result is that the noodles are considerably downplayed in the dish, letting the veggies and meat run wild without a mild counterpart to balance out the stronger flavors.

It’s in those stronger flavors where the sukiyaki really falters. No one was more ready than I to love the hell out of this little dish, but it just doesn’t quite work. The main problem in in the sweetness. Sukiyaki should be sweet enough to intrigue the tongue, but not so sweet that your left grasping for a glass of water. Trader Joe’s Sukiyaki makes exactly this mistake, loading on the sweet mirin (and added sugar) to the point where the sweetness is the primary taste. The beef and sliced veggies certainly make an impression, they just don’t outlast the strong, sweet taste of the sauce.

That brings us to the other problem – the calorie count for this bag of sukiyaki is something to be reckoned with. Each 20 ounce bag is supposed to be broken up into 4 servings. Sadly, if you buy this dish you’ll discover that serving suggestion is a pipe dream. While the helping of meat is generous, there is hardly enough veggies and noodles for two people, let alone four. Sukiyaki is meant to be a standalone dish – or at the very least an entree. Taken at the given proportions, Trader Joe’s is delivering a side soup at best.

That’s not to say this is a bad dish – there’s a lot that Trader Joe’s does well here. The beef and veggies is good quality, and come in a separate bags for ease of defrosting and cooking. There’s a real effort to try and do the whole thing right, and if the flavor palette was reformulated a little bit this would be a killer dish. Until that happens, I’ll just have to walk along, whistling, remembering fonder sukiyakis long gone.

Would I Recommend It: It’s not bad exactly, but I don’t think I would.

Would I Buy It Again: Sadly, I wouldn’t.

Final Synopsis: A good attempt at sukiyaki that ends up too scant, and too sweet. 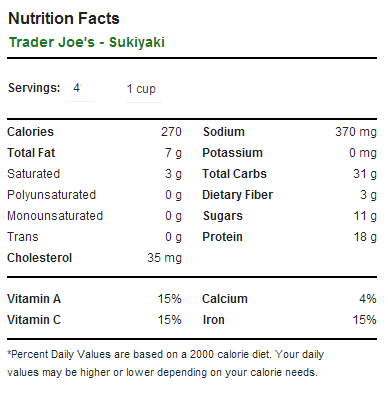