‘Could you pick up some Greens, Beans and Grains from Trader Joe’s?” That’s not confusing, right?

Trader Joe’s Green, Beans and Grains could be anything, with a name like that. What it actually is, is a West African inspired curry-like, vegetarian dish. In this case, the greens are kale, the beans are garbanzo beans, and the grains are couscous. Also there are peanuts, which are technically legumes, but whatever. They don’t get to be in the title. These tasty components have been simmered up in a heavily spiced tomato based sauce that tingles and excites the tongue. Despite not having any meat in it, this dish manages to satisfy quite nicely – a result of the complex, savory spices as much as the hearty, filling beans and grains.

The strangest thing about the name that Trader Joe’s choose for the product, is that it falls so short of actually describing the contents of the dish in any meaningful way. “Greens, beans and grains” is so vague and non-specific that it hardly serves as a product title at all – greens, beans and grains can show up in so many dishes and so many combinations, that this title only obfuscates the nature of the dish rather than help you out in any way. It’s like if Taco Bell decided to call one of their dishes “Cheese, Beans and Beef” – it effectively signifies nothing and sows confusion. It’s a sort of anti-product name really, confounding innocent shoppers and muddying the waters of cognition with its nebulous semiology.

Here’s the thing – if the dish is so West African, as Trader Joe’s themselves claim on the side of the box, shouldn’t there already be a name that it’s known by? Trader Joe’s looooves attaching strange, exotic names to their food products, often without explanation, such as their Pa Jeon, Uttapam, Kouigns Amman, Dukkah… I could go on. Why not do that again here?

The fact is, Trader Joe’s has gone somewhat rogue with West African cuisine in this dish. The word “inspired” on the side of the box is meant in the same way that horror movies about ghosts that make people’s heads explode are “inspired” by true events. The germ of the idea comes from traditional West African dish maafe – or peanut stew. Traditionally maafe is made from peanuts, collared greens, tomatoes, onions and a selection of spices such as chili pepper, coriander, garlic and cumin. Trader Joe’s made the radical decision to swap out the collared greens for kale and, strangely, the peanuts for garbanzo beans, but the spices and the tomato and onion base are still there. It’s this tasty stock that makes the dish worth eating, as well as connecting it to its African roots.

Really, given how much the dish has deviated from its West African origin, TJ’s has shown remarkable restraint in giving the product a lackluster name instead of just sticking “Trader Joe’s Maafe” on it, and being done with it. That shows integrity, Trader Joe’s Marketing Department. Kudos.

It may not be, strictly speaking, a West African dish – but Trader Joe’s Green, Beans and Grains is interesting enough to make a strong case for its own existence in the frozen food aisle.

Would I Recommend It: Yes, it’s pleasantly spicy and reasonably healthy.

Would I Buy It Again: I very well might – this would be an easy way to dress up boring meat.

Nice colors. Looks rather like the flag of Sri Lanka.

I’ve always been intrigued by Trader Joe’s Lemon Chicken and Arugula Salad, squatting in the lower reaches of the salad aisle, mostly because I assumed it had a big piece of salmon on it. That particular misconception came about due to the unusually enormous salmon pink bag of spicy pimento dressing that lays, slug like, on top of the salad mix. While there’s no salmon on this salad, what it does have to offer is tasty and intriguing.

This is, as Trader Joe’s itself is quick to point out, a Moroccan style salad. Morocco is home to many types of salads, both hot and cold and beet derived, and while this isn’t a traditional type of Moroccan salad per se, it does bring together many wonderful, traditionally Moroccan spices. These include parsley, mint and smoked paprika, all of which show up along side the lemon zested chicken.

This medley of spices is mixed into a bed of couscous and red quinoa that makes up the unspoken third component of this chicken and arugula salad. It’s anyone’s guess why the grains didn’t make it into the title, they’re certainly the most notable part of the salad. The arugula is perfectly acceptable and the lemon chicken is nicely lemoned, but it’s the couscous and red quinoa mix that infuses it with rich and savory flavors, in addition to adding a little exotic texture. Add to this a scattering of sweet currants, and you’re talking about a complex combination of flavors that could easily go all wrong. Fortunately, Trader Joe’s manages to strike a good balance here. The simple flavors of the zesty lemon chicken and the stridently piquant arugula are foregrounded here, with the other more nuanced tastes leaping out at you from the curtains from bite to bite.

This leads us, as all human inquiry must, to the spicy pimento dressing. My first reaction to this dressing was, really? A dressing made out of pimentos? What did they do with the rest of the olive after they got the pimentos out? It turns out, however, that the pimento is more than just the hilarious name for a specific type of olive stuffer, it’s a little red pepper with a life all it’s own. The pimento is a smallish chili pepper, rather like a dwarfish, heart-shaped bell pepper, known also by the name cherry pepper. In the world of chili peppers, as we all know, there’s no rating so important as your place on the Scoville scale. While the juggernauts of the chili world, the ghost peppers and scotch bonnets and such, battle it out for position Supreme Pepper President at the top of the scale, the pimento suffers the indignity of having one of the lowest ratings on the books, ranking below even the banana pepper.  Life in pepper school must have been hard for the poor pimento.

All this means that, despite being billed as such, this dressing is not particularly spicy – at least not in sane quantities. TJ’s seems to be suffering from the same spicy dressing over compensation here as they did with their seaweed salad. The single bag included in the tub could easy cover two to three salads of equal size. It’s a bold paring for such an already complex dish, but the creaminess and mild fire only add to the intrigue rather than detract from it – just be sure to play it on the safe side when putting it on.

On a final pimento note, it is my understanding stuffed green olives are made by a hydrolic pump shooting the pimento into each olive, blasting the olive pit out the other end at the same time with what, I am sure, is a very satisfying noise. While that has no bearing upon this dish, I just wanted to share that rather striking image wit you.

More than anything, Trader Joe’s Lemon Chicken and Arugula salad reminds me of TJ’s other quinoa salad – but unlike that one, this salad fails to fill you up. Once you remove the dressing packet, there’s not a whole lot left in the salad tub – just a handful of knotted arugula leaves, a little hill of couscous and, depressingly, a tiny portion of chicken. If this salad was a little more robust, I’d be a frequent buyer. As it stands, it’ll have to be content to exist as a savory side dish to go along side a larger meal.

Would I Recommend It: Yes, but not as a meal in itself.

Would I Buy It Again: Probably someday, when I’m not too hungry.

Final Synopsis: A savory, Moroccan inspired salad that’s a little on the small side. 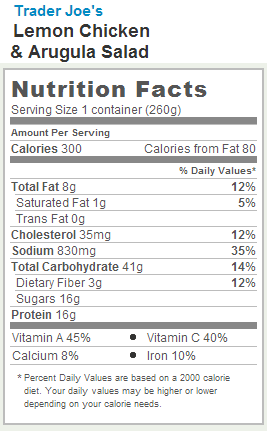 Is it a fresh-chopped field salad, or a field-fresh chopped salad? Syntactic ambiguity strikes again!

A telling fact about myself, a fact that I’ve hidden up to this moment, is that I really love salads. I can quite happily munch on a salad every day of the week and go to bed happy – if, of course, it’s a good salad.

There are, of course, very many bad salads in our world. Whether they be terrible over-priced salads that loom out at you from fast-food drive-thru menus, or a restaurant’s “house” salad that’s little more than iceberg lettuce with italian dressing on it, or even a pizzeria salads.

However, because of the miraculous age we live in, a futuristic age of reality-bending technology and hyper-advanced demographic marketing, there are also incredible salads out there. Salads with globs of Gorgonzola and candied pecans and poppy seed dressing and more calories than an entire pizza.

If god truly loved us, I would be able to eat salads like this daily and not have to worry about my arteries bursting like sausages, but as it stands I must daily endeavour to find a delicious salad that’s also healthy. Ladies and gentlemen, Trader Joe’s won new space in my heart with their lovely Field Fresh Chopped Salad with Grilled Chicken for doing just a thing. Let’s get into it, shall we.

A truly good salad takes seemingly incompatible elements and makes them work in a lovely fashion. Trader Joe’s manages this with, in addition to grilled chicken and lettuce leaves, couscous, currants, asiago cheese, pecans and a sweet basil dressing. The salad balances these sweet, salty, tangy and mild tastes into a satisfying equation of harmonic simplicity. In other words, a delicious eat.

I will admit this is the first time I’ve ever eaten couscous and currants together, but the combination is flawless. In fact, not only is the salad delicious, it’s also tremendously unique. In a world where you see the same salad variations repeated endlessly on menus everywhere this is a breath of fresh air. Actually, it’s surprising that TJ’s decided to simply label this a “Chopped Salad” when so much more is going on. Although it fits the technical specifications of the genre, a vaguely Mediterranean salad that has been chopped, this one shows so much more ingenuity in ingredient choice that it deserves one of the more overwrought names TJ’s likes to hand out to it’s products.

Other qualities that should not go un-touted: the package includes a perfectly proportioned amount of dressing for the quantity of salad, and comes along with the always useful packaged-in fork. Overall it’s the perfect item to take on a picnic, have for lunch at your desk, or compliment your dinner steak.

Would I Recommend It: If you like salads half as much as me, you’ll love this one.

Would I Buy It Again: Without hesitation.