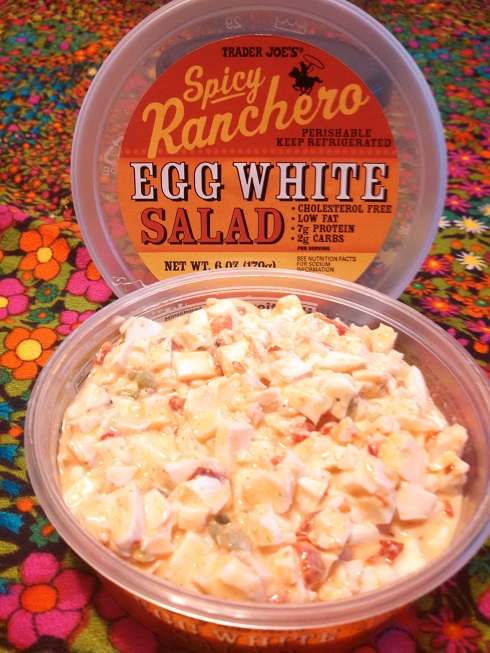 Egg salad, one of the few foods that can be this lumpy and still look appetizing.

Vamos, mi amigos, to a land where healthy egg salads are mixed with some sort of bland salsa. Vamos!

Yes, today I’m review Trader Joe’s Spicy Ranchero Egg White Salad – a riff on the classic egg salad which, one, tries to make it a little less heart-clogging by cutting out all the mayo and cholesterol and, two, tries to spice it up a bit. TJ more or less succeeds on the first count – this is damn healthy by egg salad standards – but fails rather badly on the second front.

Given the pedigree of the word ranchero, and the additional use of the word “spicy” right in the title, you might expect this egg salad to be, well, spicy. It is not. In fact, Trader Joe’s Spicy Ranchero Egg White Salad doesn’t really taste like much of anything at all, other than a mild spiciness that stops in just long enough to tap you on the tip of the tongue, then vanish off into nothingness. It’s probably the least spicy thing I’ve ever tried that could still be (technically) referred to as “spicy”.

It’s not just that it lacks spice – this egg salad lacks zing, zip and even zazz. If you pick it up it should be for the nutritional value alone, because there isn’t much to talk about in way of taste. Of course, it’s precisely because it has any nutritional value that it scores so low on the flavor side of things. There are only 50 calories per serving – and one serving is half of the container. Without tangy mayonnaise or rich egg yolks, this egg salad doesn’t have much to dazzle you with.

It seems like that would be all the more reason for Trader Joe’s to spice it up with some poppin’ peppers or fiery hot sauce instead of leaving it to languish in mild, in offensive blandness. Alas.

If you’re looking for a high-protein, low-calorie filler food, this may not really be a problem for you. The egg salad has 7 grams of protein per serving, only 2 grams of carbs and no cholesterol. As long as you don’t mind the low flavor payload, and the typically lumpy egg salad texture, this can help you hit your diet goals – just don’t expect to be wowing any Mexican ranchers with it.

Would I Recommend It: Not unless you already have a plan on how to fancy it up.

Would I Buy It Again: I might – it’s healthy enough and inoffensive enough to be a last minute meal option.