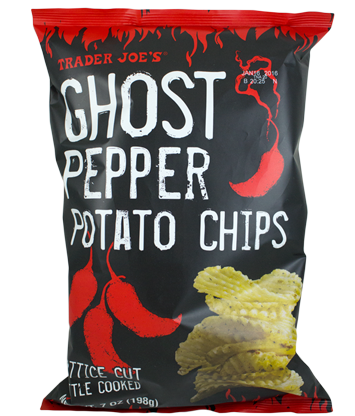 The bag looks like they’re being serious – but these chips are a joke.

Now that the season of pumpkin madness has subsided, and the cooling winds of dark November have arrived, I can finally catch up on a backlog of other, truly out-there Trader Joe’s products that they tried to slip onto the shelves without anyone noticing.

The craziest addition has to be Trader Joe’s Ghost Pepper Potato Chips. This new addition to the snack section may well be the biggest let down of any Trader Joe’s product to date.

If Trader Joe’s has a failing, it’s that it sometimes over promsises. That’s unavoidable for a group that dreams as big as they do – bringing us such exotic oddities and far-flung favorites as frozen Kouigns Amann, Tamil Uttapam and, of course, the wonders of Scandanavian Cookie Butter. I’m deeply grateful there’s a mainstream grocery store that regards the average American consumer highly enough to gamble their business on such unusual products. On the other hand, sometimes they come out the gate with what sounds like a great idea but absolutely fail to deliver on it. It’s like the Marketing team gets really excited and doesn’t listen to what the R&D guys are telling them. The result is packaging that signs a check the contents simply cannot cash.

That’s absolutely the case with Trader Joe’s Ghost Pepper Potato Chips. It’s commonly known that the Ghost Pepper is the absolutely hottest pepper in the world. Not just hot, and not just really hot, but like legendarily, pinnacle of the pepper pyramid hot. It’s weird that most people seem to know this, but they do. Every now and then the populous at large latches onto some bit of esoterica that seems like it should otherwise be languishing in obscurity. Keep your jalapenos and keep your habaneros, the people say, if you’re looking for pure, tongue-blistering, utterly unenjoyable HEAT, you want a ghost pepper.

Just in case you need a refresher on the spiciness of peppers, there is a more-or-less scientific scale that was devised to measure the relative hotness of peppers. Called the Scoville Scale, it measures the spiciness of peppers in so-called Scoville heat units, or SHU’s. A nice sweet bell pepper comes in at 0 SHUs. Banana peppers are about 100 units, a good jalapeno pepper is about 1,000 SHUs. The pepper referred to as the “Ghost Chile”, on the other hand, weighs in at 2 million SHU’s or more. Just by way of comparison, some law-enforcement grade pepper sprays only contain about 500,000 SHU’s. Four times hotter than pepper spray – that’s the ghost chile for you.

So what in heaven and hell could Trader Joe’s have been thinking when they released the absolutely mildest, gentlest “spicy” potato chip I’ve ever tasted?

I’ve spoken at length before about my light weight, or “chili wuss”, status when it comes to spicy foods. Pace brand Mild salsa is sometimes a little too hot for me. As a rule, I avoid the jalapeno potato chip. If I happen to munch down a couple by mistake I usually have to take a long break to fan my mouth. My brothers and cousins can all pile them into their mouths by the truck full, but even the gentler brands often leave me sweating.

I bring this up because even I find these ghost pepper potato chips contemptuously mild. They’re only spicy in so far as they suggest the notion of spiciness. If you smell the bag, you might think “Oh, these smell like they might be slightly spicy”. Savor that feeling, because that illusory impression is as spicy as these chips get. Bite into one of these cross-cut “lattice” style chips and you’ll catch just a hint of peppiness that immediately fades out and leaves you with basic, plain ol’ potato chip taste. I’ve had BBQ flavored potato chips that are spicier.

That’s not to say these potato chips are bad – they’re just bad at being spicy. The potato chips themselves are very satisfying to snack on – the thick, waffle-cut chips are very crispy and crunchy and entirely munchable. I found the mild spiciness to actually be a nice alternative to the spicier mainstream brands, in the same way that Trader Joe’s Sriracha sauce is a nice, less-spicy alternative to Hoy Fong Sriracha sauce. Finally, an only-sorta spicy potato chip I can enjoy! I just never thought I’d find them under the guise of ghost pepper chips.

If TJ’s had billed these chips as “Mild Jalapeno Flavor”, or “Potato chips – With Just A Touch Of Heat”, I would be writing a very different review right now. But by calling them Ghost Pepper Chips, and then doubling down on all their website and product copy about how insanely hot they are, Trader Joe’s is just making a fool of itself. Do not be suckered in by this marketing gimmick – unless you’re looking for a mildly spicy potato chip,  these will disappoint you.

Would I Recommend It: Only to people who like not-particularly spicy potato chips.

Would I Buy It Again: Yes. I’m going to ignore that these say “ghost pepper” in the title and just put them out for parties.

Final Synopsis: It would be hard for these potato chips to be much less spicy.