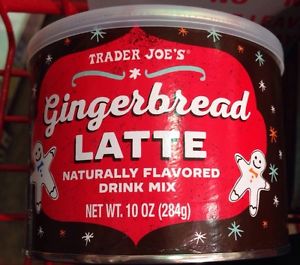 Another season, another tin of powdered drink mix. Despite a wealth of previous data suggesting that Trader Joe’s should not be powdering drinks and selling them in cans, they’ve gone ahead and done it again with Trader Joe’s Gingerbread Latte a “naturally flavored” drink mix. The result is predictably terrible, BUT it’s also surprisingly awful. Yes, a bit of a mixed bag with this one.

Do not buy, drink or serve Trader Joe’s Gingerbread Latte Naturally Flavored Drink Mix. If someone else buys it for you or serves it to you, you should come up with some way to punish them. (Throw a cup of cold water on them while they’re in the shower?) If they drink it themselves, just leave them alone – that’s punishment enough.

Trader Joe’s has disappointed before with similar powdered drink mixes – such as their Tropical Green Tea Powder, and Green Tea Matcha Powder, both of which were unpleasant tasting, messy, and bad for you. This Gingerbread Latte Mix is all that and more. The first thing I want to bring up is how fatty and sugary this stuff is. There’s a lot I can forgive in a healthy food. As I’ve written about before, you have to grade health food on a curve. If Trader Joe’s is serving you some low-cal spinach dip, it’s not fair to hold it up in comparison to a full calorie, and undoubtedly more delicious, spinach dip. To a point, you’re not buying diet food for the the taste, you’re buying it because you’re on a diet.

Well, as far as I’m concerned, the opposite case is in  effect with high-cal, fattening food. I will gladly eat you, you globs of sugary fat, but you’d better taste good enough to justify it. For instance, if you’re going to serve me unpalatable kale chips as a replacement for Doritos, they had better not have more calories than the Doritos.

This Gingerbread Latte is the absolute textbook case of something not being worth the calories. In each 28 gram serving of drink mix, there are 20 grams of sugar, and 6 grams of fat. The other 2 grams? The coffee and spices I guess. This is literally nothing but sugar and fat, and tastes terrible. Terrible and feeble. If you pour enough of the drink mix into a cup of hot water in it will taste sweet, however any sort of gingerbread taste, or “notes of ginger, clove and cinnamon”, are completely masked by the awful artificial creamer stuff that makes up the bulk of this mix. This dried creamer consists of coconut oil, lots of maltodextrin, and all sorts of other gross powders used to artificially render a sort of quasi-dairy taste into white, shelf-stable powder.

Fine, yes, it has artificial creamer in it. That makes it bad coffee, but God knows I’ve resorted to artificial creamer more than once in my life. The real problem is that this creamer simply does not dissolve – not in water, not in milk. Heat it all you like, stir it up all you like, leave it to sit as long as you want – you’ll still be left with scores of tiny, undissolved flecks of some oily substance – little globules that scum up on top of the coffee and stay plastered to the side of your mug when you’re done.

This latte mix is cheap and it’s terrible and it tastes bad and it’s bad for you. If you need to wake up in the morning and this is all you have in the house, just slam your hand in the oven and go to work. At least there are fewer calories that way.

I’m not saying don’t drink hot cups of spiced coffee over the winter, I’m saying you can do better than this. Hell, you can do better than this in your own kitchen with some coffee, whole milk and cinnamon-sugar. Or just go to Starbucks, if you don’t care about the calories. That Starbucks coffee is pretty good – and it’s waaaaaaay better than lame excuse for a pick-me-up. Even the Trader Joe’s instant powdered coffee stuff is way better (As we’ve talked about before with Trader Joe’s powered coffee packets).

The general point I’m trying to make is, I don’t like this latte mix and I wouldn’t recommend purchasing it. I could go, but it’s almost time for the next blogger guy to come in so I’d better wrap things up. To ensure a happy holiday season, skip this stuff.

Would I Recommend It: Hmmmm, no.

Would I Buy It Again: *Shakes head, slowly and sadly*