Do not trade a cow for these.

Trader Joe’s is no stranger to whimsy, and what could be more whimsical then bringing a bag of magic beans to market? That’s precisely what Trader Joe’s has done with their mysterious new offering, Trader Joe’s Magic Beans! An extremely enigmatic offering that combines vagueness with and strange product impulses into a bewildering product.

Trader Joe’s Magic Beans are certainly magical. Not necessarily in the way that wizards and dragons are magical, and not in the way that rainbows and a child’s smile are magical, but in that way a that mild concussion is magical – by turning ordinary things into an set of surreal and perplexing stimuli that don’t really make sense.

Upon seeing a bag of Trader Joe’s Magic Beans for the first time, many questions immediately spring to mind. Magic beans, really? What makes them so magical? What are they exactly? Where do they come from? None of these questions are answered in the slightest anywhere on the bag. You are presented with a strange, plastic sack of oblong candy, a product name, and no more.

One of Trader Joe’s more infuriating traits is a tendency to leave off the product copy. When they do include copy, it’s uniformly delightful and well considered – equal parts gently amusing and gently educational. However when they elect not to include copy, it’s almost always in instances like this – on their most unusual and unique items.

TJ’s is giving us nothing to go on here. “Mystery Beans” might be a better name. All we’re told is that they’re chocolate covered nougat beans. The surprise is that not only is the chocolate shell hard and crunchy, but so is the nougat in side.

Yes, crunchy nougat – not the typical soft and pliable stuff so pleasantly yielding to the tooth. This nougat has been hardened to a brittle condition. Biting into one of these over-sized beans is an act of crunch, crunch, crunching – like biting into some chocolate covered brittle or toffee.

That’s the other unusual thing. The nougat is crispy hard and almost buttery sweet – not at all like ordinary nougat, much more like toffee or crunchy caramel.

I’d never had crunchy nougat before. It’s certainly not something I ever though to ask for. Are there people out there who appreciate crunchy nougat? Is this a thing? I have to say it wasn’t entirely unpleasant, but going in expecting nougat made it a little off putting.

The chocolate part can pass largely without remark. It’s your basic, low quality Halloween candy-style milk chocolate making up a quarter inch thick cocoon. Not the best Trader Joe’s has to offer by any means.

Interestingly, these beans have also been shellaced – literally. Shellac is listed as the eighth or ninth ingredient. As you probably know, shellac is a resin generally encountered as a wood or nail polish varnish. Typically, that’s not something I’m looking for in my food – even though it is technically edible and a somewhat common food glaze.

In the end, there’s nothing really for me to recommend these on. Unless you’re intrigued by the concept of crunchy nougat, it’s hard to imagine anyone picking up these mysterious shellaced beans, even if I highly recommended them. Apart from giving them to out to kids as part of a “magical” gift bag, these beans were just sort of blah.

Would I Recommend Them: No, not particularly.

Would I Buy Them Again: I have had a enough crunchy nougat and shellac, thank you.

Final Synopsis: Low-quality chocolate around a nougat-esque core does not necessarily equal “magic”.

Like a lake effect blizzard, the holiday season has descended on Trader Joe’s  – only instead of snow, we find ourselves mired in drifts of seasonal holiday offerings. From artisanal mustard sets, to tea samplers to the return of Pink Himalyan Truffle Salt, the shelves are again overflowing with slightly over-priced, niche items in attractive packaging. Frankly, I love it. Trader Joe’s holiday gifts are the second most jolly time of the year for a Trader Joe’s food review blogger – second only, of course, to the annual Pumpkin Madness.

Our impulse buy today is Trader Joe’s Triple Tiered Chocolates. This is one of those ideas that’s so stupid it’s brilliant or, possibly, vice-versa. I’m not sure why I haven’t seen anything like this anywhere else before, because the idea has been sitting in plain sight for decades.  Simply put, TJ has taken slice of white chocolate, a slice of milk chocolate, and a slice of dark chocolate and stacked them all together into one chimeric, hybrid chocolate treat.

There are two things going on here with this new chocolate, and I’ll start with the most important one. This is unmistakably a gift item first, and a chocolate treat second. The difference is sometimes subtle, but basically comes down to the packaging. From the box design, to the font, to the presentation of the chocolates themselves, Trader Joe’s Triple Tiered Chocolates have been designed to look good first and taste good second.

Chocolate is a very safe niche in the holiday gift giving world, and this product fills it expertly. Just look at the box, for instance. Who packages seven chocolates in a box only 3 inches wide and 18 inches long? Someone who’s trying to make an impact with fancy packaging, that’s who. Hand this out to a co-worker / in-law / mail carrier and you’re going to get a little an “Aww” on the box alone . No question – it makes an impact.

Fancy chocolates in their own little rooms.

But once we actually get the box open, how do the chocolates themselves stand up? Well, for one, they’re chocolate. As we’ve talked about before there’s not really any such thing as “bad” chocolate. Having any chocolate is a preferable existence to having no chocolate, and this is by no means a bad chocolate – although Trader Joe’s makes things tricky by combining the three different types together.

While there are certainly plenty of people who define themselves as “chocolate lovers”, these people generally break along the dark chocolate / milk chocolate line. Combine those two into one chocolate, and then add a layer of the always divisive white chocolate, and you have a confection that’s going to simultaneously delight and disappoint people.

While I’m sure that’s true to some extent, the white chocolate here actually elevates Trader Joe’s Triple Tiered Chocolates to a strange new level. Never, before taking a bite of this stuff, have I stuck these three very different types of chocolate into my mouth at the same time. The result is something I wasn’t expecting – the flavors melt into one another in a complex interplay. The waxy, sugary taste of the white chocolate, normally cloying, is ameliorated by the flow of the sweet milk chocolate and bitter dark. The result is an intriguing storm of cocoa and sugar, teasing your taste buds this way and that. Certainly enjoyable to savor as it melts upon the tongue.

Unfortunately the chocolates are too big to pop into your mouth all at once. Instead, you have to bite through the three, firm, thick layers – a surprisingly difficult feat. Even after you manage it, the chocolate layers have a tendency to come apart under the pressure, leaving you a potential mess in your fingers.

All in all, I’m satisfied with the purchase. It makes an interesting gift, but also manages to stand on it’s own as an intriguing, if not overwhelming, chocolate confection.

Would I Recommend It: Sure, this could make a nice Christmas gift.

Would I Buy It Again: Not for myself, maybe for others.

Final Synopsis: A handful of novelty chocolates in fancy packaging. 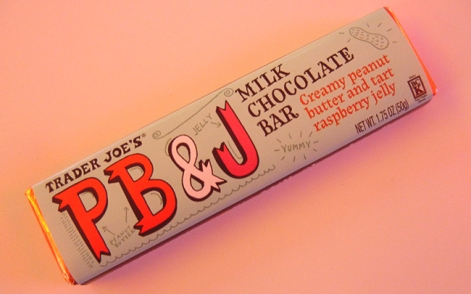 Peanut butter and jelly on chocolate? Is that allowed?

As a fully-functional adult, I assumed my soul had been successfully numbed to the tingle of effervescent wonder I experienced as a child. It was much to my surprise then that I found myself gob-smacked, properly gob-smacked, when I walked into the Wonka Candy Company’s flagship store in downtown Los Angeles the other night and discovered a glittering, whimsical showroom torn straight from the pages of childhood fantasy.

Elaborately waistcoated chocolateurs glided about between ornate candy displays, curtains of heavy purple velvet, and delicate confections that looked more like art than candy. Clearly a well researched decree from the marketing department had lead a team of skilled Imagineers, or even Visioneers, to design room said room for the explicit purpose of actually induce levity in adults. Well done, corporate America. However, what most stirred the rusty ventricles of my full-grown, deadened heart were the glass globes displaying prototype chocolate bars representing the furthermost edge of whimsical chocolate research. Amid the glittering confections and novelties sat the Peanut Butter and Jelly Chocolate Bar – an innovation that struck me as being as brilliant as it was outré.

“The market will never be persuaded to adopt it!” I declared to the world at large, so stunned was I by the audacity of the thing, so sure I would never see it in any normal store.

Reader, you might well imagine my surprise when just this last week, as I meandered through my local TJ’s, my roving eye chanced to fall upon Trader Joe’s own Peanut Butter and Jelly Milk Chocolate bar. Shocked? I practically dumped in my pants.

The bar is well put together certainly. The peanut butter and jelly are layered in discrete, unmingled layers just beneath a thin sheath of chocolate. Both condiments run the whole length of the bar in equal proportion ensuring each bite delivers an equal mix of all three ingredients. And while that’s good, it’s still not great.

Part of the issue is that the PB&J, in being kept so totally unmixed, taste just like the PB&J you had in so many sandwiches as a youngster. Now peanut butter is good and jelly is a fine condiment as well – but have you sat down to a peanut butter and jelly sandwich lately? Make yourself one today. Use some Jif peanut butter and some Welch’s raspberry jelly. Take a bite, tell me what you think. Not bad, right? But not exactly great either. Not something you’re going to rave about.

It’s a noble feat, delivering such a whimsical chocolate bar to store shelves, but not a resoundingly successful one. The bar is passably good, but uninspired. Trader Joe’s does great chocolate, they do some great peanut butter and peanut butter replacements. Perhaps if this bar had been formulated with some more exquisite ingredients it would be more than just a novelty candy bar.

Perhaps it’s my deadened adult heart. Perhaps it’s that the child in me to that once so loved PB&J sandwiches has been defeated by spreadsheets and traffic jams. Or perhaps I have grown up and moved onto bigger and better things. In either case, this whimsical bar doesn’t justify a second purchase.

Would I Recommend It: If you’re curious go ahead, but keep your hopes low.

Would I Buy It Again: No sir, I wouldn’t.

Final Synopsis: Might as well spread some Jiff and Welch’s on a Hershey bar.