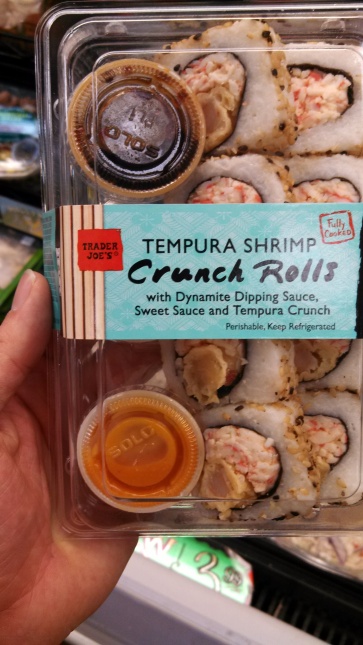 Notice how the word “sushi” is carefully avoided. “Sushi, what’s that? You mean shrimp crunch rolls?”

Trader Joe’s Tempura Shrimp Crunch Rolls – well, these are interesting. I fully intended to never buy another clammy lump of Trader Joe’s sushi ever again. This isn’t a Trader Joe’s problem, this is a general supermarket problem. Supermarkets (the places that keep food for weeks on refrigerated shelves) simply do not match well with sushi (the delicate slices of raw fish mean to be eaten as fresh as possible). The problem is I love sushi, and even the most lopsided of supermarket california rolls call out to me with plaintive little voices, begging to be eaten.

Like a man in a bad relationship I kept going back for more – and every time I did I was left with a bad taste in my mouth, swearing I’d never do it again. The supermarket sushi experience, though universally bad, never quite broke my eternally hopeful nature that this time, surely, they were going to get it right. The vicious cycle continued until I found myself staring at the mealy, flavorless, half-eaten mass of a Trader Joe’s Quinoa Roll and realized this had gone on too long. I was never going to let sushi treat me that badly ever again. I was done with supermarket sushi, and I meant it.

I was doing good – walking past the sushi aisle without so much as a second glace, developing a sense of self-worth – until yesterday when I saw the tarted up, trashy glory of Trader Joe’s Tempura Shrimp Crunch Rolls and my willpower just gave way. Grasping at the flimsy excuse that is this blog (“I have to buy this terrible thing, I owe it to the public!”) I clutched the sushi rolls to my chest and sped home. Why do I do it to myself? Do I crave the abuse? Whatever the case, I found myself there again, off the wagon, staring at a polyurethane tray filled with damp rice wads.

Only this time, my friends, this time it’s actual good. How is that possible, you ask? How did Trader Joe’s manage to make bottom rung, low grade sushi worth eating? Quality ingredients? Magic? No – the answer is much simpler. Trader Joe’s simply identified the weakest link in supermarket sushi (the way it tastes) and came up with a brilliant solution – drown it in delicious sauces!

It’s honestly surprising that it took a supermarket so long to hit on this elegant solution. “Fusion” sushi restaurants have been doing this for years – smothering their otherwise mediocre fish with cream sauces, spiciness and bread crumbs. Trader Joe’s does the exact same thing. In each package of Tempura Shrimp Crunch Rolls you’ll find three tubs of savory toppings – a tub of “Sweet Sauce” (aka soy sauce thickened with sugar), a tub of “Dynamite Sauce” (aka spicy mayonnaise) and a tub of tempura crisps. The Sweet Sauce and Dynamite Sauce are nowhere near healthy, and Trader Joe’s gives you enough to lay a heavy drizzle on each pre-cooked tempura shrimp roll.

How do the tempura shrimp rolls taste by themselves? I have no idea, I never tried. Why bother setting myself up for yet another bad experience when I have thick, delicious sauces to ladle on? I will say that they are relatively crispy and crunchy, and hold together well enough for either a chopstick or fork to take them on a fantastic voyage through the world of sauce and into your mouth without falling apart.

When you do get to your mouth, you’ll be surprised at how good tasting these sauces actually are. The Sweet Sauce is akin to a sweeter form of teriyaki sauce, dripping with syrupy goodness, and the Dynamite Sauce is mildly spicy and endlessly creamy. Liberally apply the crunchy, round tempura crisps to the outside of the sauced up sushi for some enjoyable texture and you’re in for an eating experience that’s a powerful taste explosion, if not exactly the paragon of elegant dining.

Some of you purists out there might protest that fully-cooked shrimp dripping with tempura crumbles and mayonnaise is not, strictly speaking, real sushi. You are, of course, absolutely right, but you’re also missing the point. Criticizing the authenticity of these products is like getting upset about the representation of physics in Scooby Doo. You’re just setting yourself up for a bad time. Supermarket sushi is, and always has been, little more than junk food. By adding sauces, Trader Joe’s has merely helped complete that apotheosis.

Would I Recommend It: Not to anyone who likes actual sushi.

Would I Buy It Again: Yes – whenever I want to indulge my trashy side.

Final Synopsis: Not exactly sushi, but the sauces sure are delicious. 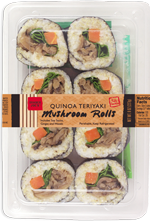 Yes, there is quinoa in sushi now. No one shall escape quinoa!

Holy crap – I mean, guys, words fail me. We’ve seen some pretty bold and unpredictable moves from Trader Joe’s before, but I’ve never seen anyone, anywhere, seen anything like Trade Joe’s Quinoa Teriyaki Mushroom Rolls.  Swapping the rice out of sushi for quinoa? That is some mad scientist level tinkering there, mad science that has resulted in an abomination not fit to dwell on God’s green earth.

Look, I like Trader Joe’s, you like Trader Joe’s, but let’s be honest here – no supermarket has ever made reasonable sushi. Supermarkets on the coast of Japan don’t even do sushi well. If you want sushi, you go to a sushi restaurant. If you want cold patties of clammy rice and old fish, you go to supermarket. I can only imagine that it’s only due to the abysmal standards of supermarket sushi that Trader Joe’s thought they could get away with such an outlandish concoction. Replace the seafood with marinated mushrooms? Why not? Infuse the rice with quinoa? Who’s to stop you?

It’s not that I can’t see their thought process here – a healthy, vegetarian option for sushi lovers is a noble goal – but the execution here is unconscionable. The marinated mushrooms themselves are alright – a bit slimy, but tasty and nicely saturated with teriyaki flavor. If the product was mushrooms alone, I’d have little to complain about. The real culprit in making these rolls inedible is the unpleasant quinoa/rice wrapping – served soggy, tremendously dense and mealy. Those are characteristics shared by most supermarket sushi rolls, granted, but these were without a doubt the worst I’ve had of that dubious ilk. Was it adding quinoa that pushed it to the bottom, or would these have been just as bad with rice alone? It’s hard to say.

What would you expect the primary ingredient to be in a quinoa roll? Quinoa, perhaps? You would be mistaken, I’m afraid. I like quinoa, I’ve discussed it before, but it’s inclusion here is tragic. If the roll was entirely made of quinoa, that’d be one thing – I expect I’d even like a roll made entirely of quinoa. But that’s not what we have here. What you’re really getting is rice, sprinkled with a bit of quinoa.

Consult, if you would, the picture above. Notice the little yellow dots? That’s the quinoa. Everything else? That’s rice. It hardly seems honest, really, to bill these as quinoa rolls. If TJ’s really wanted a healthier sushi roll, they should have gone with a brown rice. You can’t just mix up an 80-20 rice to quinoa mix and call them quinoa rolls – that’s farcical, Joe. Knock it off.

If you’re a vegetarian and you love sushi, I feel for you I really do. For the time being, however, I’d suggest sticking to your cucumber and daikon rolls. I hope that Trader Joe’s will do something else with the teriyaki mushroom bits. Until then, I must award these quinoa rolls with the ignoble “Worst Thing I Have Ever Eaten from Trader Joe’s” award. Congratulations.

Would I Recommend Them: No. Really, really no.

Final Synopsis: Why would Trader Joe’s do this to sushi?