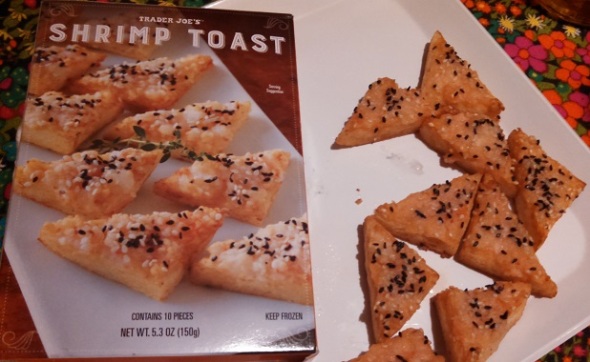 Shrimp toast is as nearly as simple as it sounds – toast with shrimp on it. More accurately, it’s small triangles of bread, sprinkled with sesame seeds and topped with a thin layer of minced shrimp and tapioca yeast . The result is something that  doesn’t taste all that much like shrimp. Instead, it tastes like toast with a sort of mild, not easily identifiable, slightly moist topping of some sort. All authentic seafood flavor has been left far behind.

It’s not exactly a taste sensation. Shrimp toast, also known as prawn toast, has a tradition in Chinese American cuisine as a classic dim sum selection. Done right, it can be crispy and delicious – a palette cleanser between richer dishes, or eaten with a drizzle of duck sauce.

I’ve had quite good shrimp toast at dim sum – although my favorite versions end to be lightly fried. The Trader Joe’s variety is instead oven baked, and while that helps to keep the fat content down it doesn’t help out the flavor. And about that fat content – even baked, one serving (two of the tiny triangles) has 6 grams of fat (50 calories), and 2.5 grams of saturated fat. Not exactly a health food.

About the best thing I can say about Trader Joe’s Shrimp Toast is that they were easy to make. 8 minutes in the oven and they came out hot and crisp. Even then, however, they felt less like an appetizer in their own right, and more like the base for an appetizer that the top fell off of.

With a little creativity and ingenuity, you could probably whip up a topping that would make up for lackluster shrimp paste – but really I’m not sure it’s worth it. Trader Joe’s carries a lot of delicious bite-sized appetizers – but this Shrimp Toast isn’t one of them.

Would I Recommend It: Not even to the most devoted dim sum-er.

Would I Buy It Again: No more shrimp toast for me.