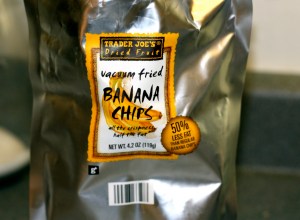 The package. Simple, pretty and shiny – like an angel.

I’m not going to play coy on this one – these freakin’ banana chips rock. Let’s get it out up front – who doesn’t love banana chips? No one, obviously, and I think we should all tip our metaphorical hats to the man, men, woman, women or mixture thereof who pioneered the frying of this fleshy fruit in the first place.

As much as we love them though, what’s the ever-present downside of banana chips? Too much grease, and not enough rockin’ banana flavor.

Well, man, brace yourself. Trader Joe’s has solved both problems by, once again, applying the science of vacuum frying. As I mentioned in my last post, vacuum-frying is just deep frying but done inside a vacuum chamber. This is commonly used for fruit chips (like bananas!) because the absence of an atmosphere lets things fry at a lower temperature – thus preserving flavor and color while (slightly) reducing oil. In this case, however, we are talking a 50% reduction in fat – and the best damn banana chips you’re likely to find.

Crisp and very sweet, but not overwhelming, I was pleasantly surprised to see the complete list of ingredients read “Bananas, Palm Oil”. I was like, “Seriously? And this much flavor?!” Listen guys, I’m telling you they are totally serious.

Would I recommend them? Totally already did.

Would I buy them again? Over regular banana chips? Every time.

Final Synopsis: The best banana chip that I, personally, have eaten.

As I suspected when I bought the bag, these unsalted potato chips taste like unsalted potato chips. The fact they are made from red, gold and “blue” types of potato made me wonder if it wasn’t some sort of quasi-patriotic tie-in to flag season. However, the chips themselves look all but identical, either white or dark blueish-brown wafers of identical taste.

That said, as far as unsalted potato chips go, these are nice. The chips are strong enough to dig into a dip and very broad. The bag copy makes a point of this – pointing out they make their snack from whole potato slices and not potato scrap left overs like other companies. Not just laudable, but a definite revolution on the snack front.

The chips aren’t too greasy – probably aided by the fact that, as the side of the bag touts, they’re vacuumed fried. Vacuum frying is basically just deep frying, except that the deep fryer is inside a vacuum chamber. Without an atmosphere, the oil boils at a lower temperature allow chips to retain more of their natural color and flavor and, allegedly, are less greasy, though only by a few percent.

Now, if I were the kind of man who buys unsalted potato chips, I could probably go on and on about them. I’m not, of course – no one is. In all my years I’ve never met a person who’d choose unsalted over salted potato chips – nor can I imagine any reason anyone ever would, apart from coercion at gun-point. Even people with sodium concerns are more likely to skip chips altogether for a better tasting, low-salt snack then settle for tantalizing themselves with neutered versions of their beloved Lay’s or Pringles.

Would I Recommend Them: Only to people who tackle the stiffest, densest dips.

Would I Buy Them Again: Nope.

Final Synopsis: An excellent snack in a purposeless category.

Blood oranges are, of course, awesome. I mean, c’mon – it’s an orange with crimson pulp and the word “blood” in its name. It’s like the Xtreme version of your everyday, buttoned down breakfast orange. Who wouldn’t want a soda made from it?

The main thing that bothers me about this product though, is the nomenclature. Are they proclaiming that it’s an Italian Soda with Blood Orange flavoring, or a normal soda that tastes like blood oranges from Italy? That might seem like quibbling, but the distinction matters.

An Italian Soda (sparkling water mixed with syrup) is quite different from a can of Fanta. On the other hand, if the marketers are actually calling out which strain of blood orange they’re using that is a much more subtle distinction – Italy is famous for it’s blood oranges, namely the Toccara, but there are also popular, and sweeter, Spanish and American varieties.

With the images of rolling, Tuscan-esque orchards on the label, it seemed most likely that Trader Joes just wanted to get the word “Italian” up front as soon as possible to entice simple-minded buyers who equate the word with Mediterranean luxury (like me).

Unfortunately, Italian Blood Orange Soda let me down. Not because there is anything wrong with it. It’s a quite tasty and slightly bitter, orange flavored soda. It has the calories of a regular soda, the effervescent fizz of a regular soda and, basically, the taste of a regular soda. Although the label proves it is, in fact, sparkling water mixed with blood orange extract, in the end it’s just another soda.

This is a perfectly safe purchasing option for people who want to try something only a little bit different, or as a light warm-up for more adventurous consumption to follow.

On a final note: I was initially pleased by the very blood-orangey look of the soda, but later dismayed when I saw the color was brought on through the use of coloring agents, then finally pleased again when those coloring agents turned out to be derived from the sinister sounding “black carrot.” Not necessarily ideal, but certainly much cooler than resorting to red dye #6.

Would I recommend it? If I was bored.

Would I buy it again? Not any time soon.

Final Synopsis:  In the end, just another soda. 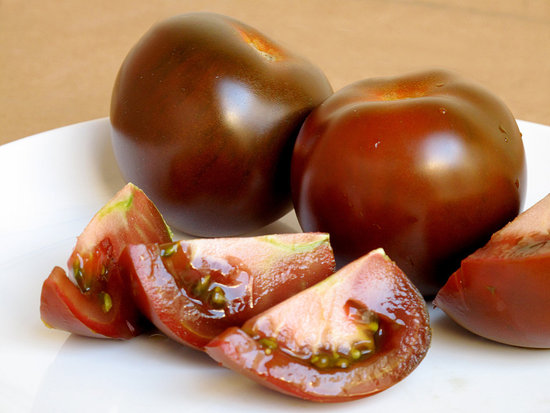 Hell yes, brown god-damned tomatoes. I had high hopes for these immediately, as both an inveterate tomato fiend and lover of strange foods. Many color tomatoes have I seen – red and green, tiny yellow dudes and giant misshapen orange heirlooms, but brown?!?! That’s gutsy. Brown is, after all, the color every vegetable wishes to avoid – the visual tip-off that all that was once good and wholesome has putrified into waste. Yet some inspired ad genius at Kumato farms decided “To hell with convention – we’re going to sell brown tomatoes!”

It shouldn’t surprise you that I found these resting next to the Saturn peaches and, like their squat friends, brown tomatoes are largely a non-event. The taste was a touch sweeter and a touch less acidic than your standard hothouse tomato – apparently the kumato has a boosted level of fructose – but I thought it was a very subtle difference. Other than their bizarrely colored flesh (they’re a nice burgundy color on the inside, btw) I found brown tomatoes basically interchangeable with the ordinary sort. I feel fine leaving them to the salads of iconoclasts and antiestablishmentarians who were long ago bored witless by the bourgeois garden-variety tomato. Although, I must say they looked quite nice diced up on my bed of lettuce.

A final note of interest, “kumato” is actually a trade name, and the strain is very tightly controlled by Sygenta, the ominously named company that originally engineered its existence. Only a select handful of farms are allowed the seeds to grow these unusual fruits, and they must obey Sygenta regulations and pay the appropriate dues and tithes to the company – all of which goes to make the act of growing tomatoes sound like the forerunner for a grim dystopian future we shall all find ourselves plunged into soon enough.

Would I recommend them: Only to the rebellious.

Would I buy them again: Sadly, no.

Final Synopsis: A novelty vegetable with no punchline.

A final note, I noticed that over several days the tomatoes took on a steadily redder hue, turning a dark reddish brown on the same day they turned squishy 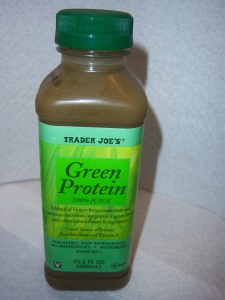 Pleasantly surprising. Looking at the murky green glop in this bottle, you have to wonder why they didn’t opt for an opaque container instead. Just look at it: too drab to be fecund, to green to pass itself off as good tasting. It has the exact same look as pond scum, and the cut rate labeling on the bottle only enhances the feeling that this product comes from far back corner of the Trader Joes factory, where light bulbs flicker and the machines are slowly breaking down.

What’s the surprise? It’s sweet. Really sweet – like thick apple juice cut with banana and mango, which is, basically, what it is. Underneath, the bitter tones of the wheatgrass juice and other healthy stuff occasionally poked through, but never becoming unpleasant.

This overall sweetness is what turned me off. I live in America, man, finding sweetened fluids is no chore. I basically spend all day sipping on, purchasing, or watching advertisements for a broad spectrum of sweetened fluids. When I pick up a cheap looking bottle of wet green stuff, it’s because I’m ready to teach my tongue a lesson for leading me down those candied alleys. When I pick up something healthy, I mentally prepare myself for a certain degree of nasty taste. If it didn’t taste at least a little bad, how would I know it was good for me?

I feel like this is a product that doesn’t know what it wants. The look of it makes me imagine it lining the microfridges of hard-core vegans, but the taste is hamburger-joe friendly. It advertises itself as protein, but only delivers 10g of the stuff while its flashier competitors, sitting right next to it, offer 16g and 20g of protein. It feels like a product that was focused grouped into no-man’s land, or a hold out from a more primitive age.

Would I recommend it? No.

Would I buy it again? No.

Final Synopsis: A protein-ish drink that tastes good, to its own detriment. 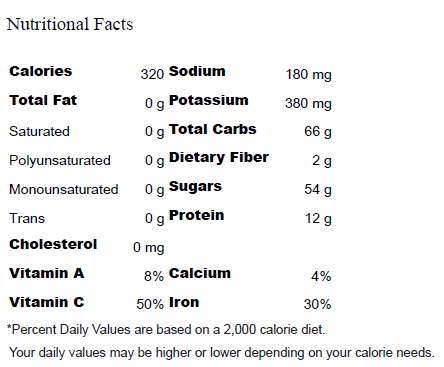 I picked these up based on a single wavering point of uncertainty in my soul, I love the idea of spicy, sweet pineapple chunks – but will they be too spicy? I mean, they put a chili right there, on the front of the label. That’s a bold statement. More alarmingly, by far actually, is the way that each segment of pineapple is caked in bright-red chili powder. Not dusted, not coated, but actually choked with hot-looking ground red cayenne.

The first nibble proved that my fears were, if anything, too conservative. In the first bite there was nothing but the taste of cayenne, a burning that persisted lound and strong even when the sweet taste of candied pineapple came through, and which continued on long after the morsel was eaten. I immediately freaked. My initial expectation what that there would also be a salty layer – like in delicious Mexican candy. This was no snack for children – or if ever a child was found that did like them, they would likely twist my arm up behind my back and take the rest of the bag and probably my wallet too.

The weird thing is, after a couple minutes when the pain had faded away, I went back for more, and more after that. Somehow, despite my chili wuss status, I was addicted. The pepper didn’t stop burning my lips, but somehow the sweetness and pain of it all kept bringing me back for more. I think some part of it can be attributed to the texture of the candied pineapple bits, which was both novel and pleasantly yielding, all the plastic give of dehydrated fruit, but under coating that was neither sticky nor melty. Easily as enjoyable to handle and chew as they are to actually taste.

Would I recommend them: Yes

Would I buy them again: Yes 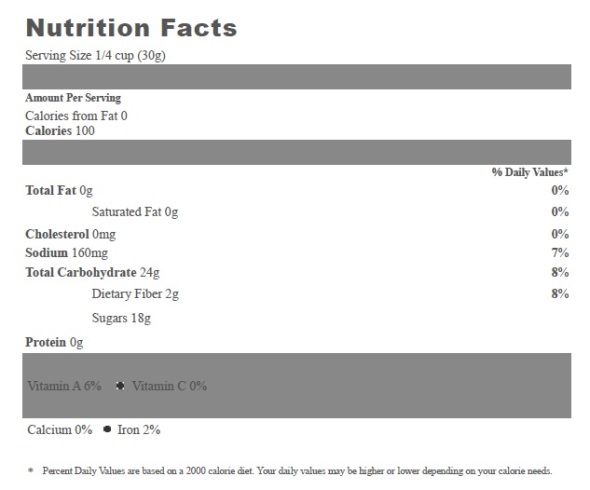