The package. Simple, pretty and shiny – like an angel.

I’m not going to play coy on this one – these freakin’ banana chips rock. Let’s get it out up front – who doesn’t love banana chips? No one, obviously, and I think we should all tip our metaphorical hats to the man, men, woman, women or mixture thereof who pioneered the frying of this fleshy fruit in the first place.

As much as we love them though, what’s the ever-present downside of banana chips? Too much grease, and not enough rockin’ banana flavor.

Well, man, brace yourself. Trader Joe’s has solved both problems by, once again, applying the science of vacuum frying. As I mentioned in my last post, vacuum-frying is just deep frying but done inside a vacuum chamber. This is commonly used for fruit chips (like bananas!) because the absence of an atmosphere lets things fry at a lower temperature – thus preserving flavor and color while (slightly) reducing oil. In this case, however, we are talking a 50% reduction in fat – and the best damn banana chips you’re likely to find.

Crisp and very sweet, but not overwhelming, I was pleasantly surprised to see the complete list of ingredients read “Bananas, Palm Oil”. I was like, “Seriously? And this much flavor?!” Listen guys, I’m telling you they are totally serious.

Would I recommend them? Totally already did.

Would I buy them again? Over regular banana chips? Every time.

Final Synopsis: The best banana chip that I, personally, have eaten. 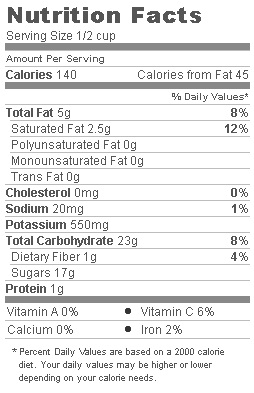