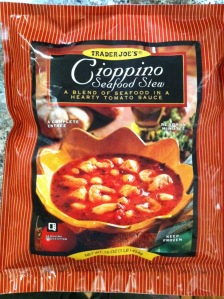 Seafood can be done well, and seafood can strand you in the bathroom for 24 hours – so when someone, even Trader Joe’s, offers to make me a stew from assorted castoff bits of seafood I take pause. Nevertheless, it is my duty to report on such things to you, dear reader, and so I found myself face to face with a bubbling bowl of Trader Joe’s Cioppino Seafood Stew.

Cioppino, despite it’s robustly Italian-sounding name, is actually an American creation – springing into existence on the docks of San Francisco in the 1800’s. It owes it’s name to a derivation of the Italian word meaning “to chop”, a naming convention that is less than totally unique.

In this case, the chopping was done to whatever the fisherman had left over once the good bits of their day’s catch had been accounted for. This fish, bivalve and crustacean medley was then chucked into a pot and simmered in a tomato and wine base until delicious. This colorful history played through my head as I stared at the floppy, opaque bag Trader Joe’s was peddling – images of unsavory, marine castoffs swimming through my head. As I ripped open the bag and poured its contents into my stew pot, I discovered my fears were for naught. Once again, the TJ’s chefs have saved what may have been a questionable concept in lesser hands by the strength of their delicious recipes. Rich, red and flavorful, Trader Joe’s Cioppino Seafood Stew is as hearty as it is delicious.

It’s the base that makes it work – a heavily seasoned tomato stock cut with red wine that verges on the edge of being too salty without going over. It’s a good stew base through and through, a gut-warmer that invites slow, deep sips.

The seafood itself is a nice mixture of deboned cod, and shelled shrimp, scallops, mussels and clams. Strictly speaking, this is a departure from traditional ciopinno, which is made from local fish plus shrimp, crab and squid, still bone-in and in shell, as suits the tuff wharf walkers of San Fran. Even better, despite the plentiful helping of seafood in the stew, it doesn’t suffer from a debilitating fishy taste.

I didn’t find much to dislike with this stew. One quibble is that the bag contains 80% of your daily sodium intake between two small servings. Speaking of which, the bag is ridiculously oversized for the contents it holds. Despite the appearances, you’ll be able to cook up the entire dish in a pint-sized sauce pan with room to spare. Trader Joe’s calls this two servings. Not where I come from, TJ.

Would I Recommend It: Get your cioppino on, those of you not suffering from high blood pressure!

Would I Buy It Again: It’s the perfect excuse for me to buy a bread bowl.

Final Synopsis: A tasty, salty seafood stew that does it all right. 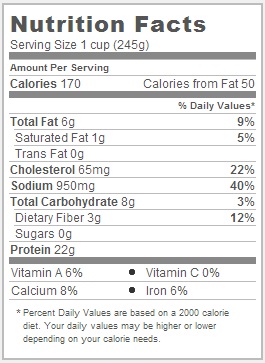