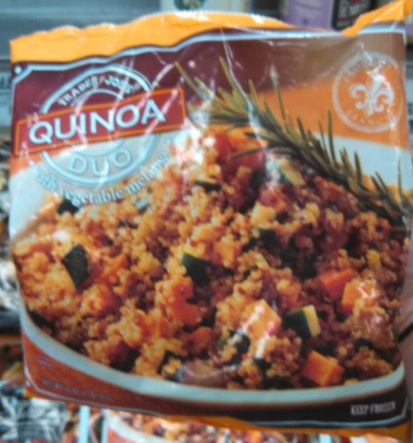 Trader Joe’s Qunoa Duo with Vegetable Melange is the sort of healthy fare I turn to when the New Year rolls around and the scale starts broadcasting dire warning vis-a-vis my sexiness. I’ve touched upon the intricacies of quinoa before, but this is the first time I’ve really sat down for an all quinoa dish.

The big deal with quinoa, and the cornerstone of its popularity, is the fact that quinoa contains a balance of all nine essential amino acids, in other words it’s a “complete protein”. This is common among meats, but rare in the plant world which makes it a boon to vegetarians. While that’s not me, I was particularly excited by the notion that I would be eating both red and white quinoa at once. Two quinoas? They must be, like, wildly different right? Otherwise, why mix them together? Sadly, I was a let down to discover that red and white quinoa are practically identical. The only real difference is that red quinoa is a little more toothsome than white quinoa, and doesn’t clump as much.

Trader Joe’s Quinoa Duo combines the quinoas with cubed zucchini and sweet potato, tinged with a bit of tomato sauce. The result is about as strange as it sounds. I’ll be upfront with you, I didn’t much love this one. It’s not that I dislike quinoa – I like it just fine, sometimes I even love it, and it’s not that I dislike vegetable melanges either, I’ve had one or two from TJ’s that I’ve quite enjoyed. The problem for me came in the mixture of everything together.

Quinoa has a decidedly nutty flavor.This works well with the sweet potato, and reasonably well with the zucchini, but for some reason Trader Joe’s decided to put a french twist on the dish. This takes the form of a tomato flavoring that is mixed in with the dish – not so strong as to really stand on its own, just strong enough to sort of throw the other flavors off. It certainly makes for a complex taste, but to me it came across as more of a mess of flavors than a medley.

Really, though, how much you like this dish will come down to how much you like hot quinoa . Although the words “vegetable melange” are right there in the title, don’t come to this dish expecting much more than quinoa. The pseudograin-to-veggie tradeoff is something like 80 – 20, meaning for every big mouthful of quinoa you’ll get a couple bits of zucchini or sweet potato. That also means that, despite Trader Joe’s urgings to the contrary, this doesn’t make a very good main dish. Undoubtedly there’s room to find a good entree pairing here that will elevate the rather confused taste of the quinoa duo to a higher level, although I couldn’t tell you what that would be.

If you’re really interested in working this quinoa duo into your diet, I reckon the best approach is to disregard Trader Joe’s serving suggestions entirely. Cool down the quinoa after you cook it up, and turn it into a salad base. You can find one good recipie for just that on this blog. Mixed with the right combination of veggies and seasoning this quinoa duo can become something great – by itself, not so much.

Would I Recommend It: Yes, to undernourished vegetarians and adventurous salad makers. No to most others.

Would I Buy It Again: No, I wasn’t really into it.