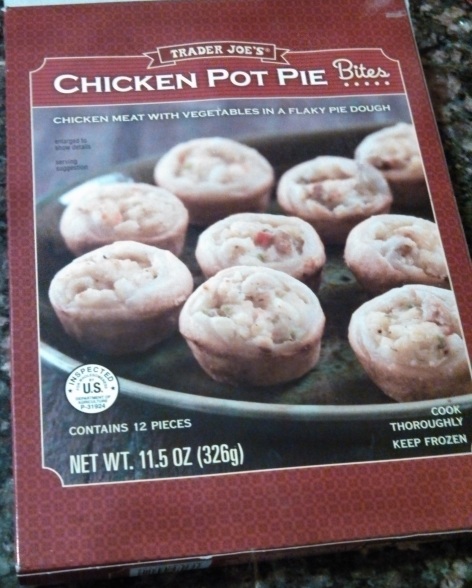 I will guarantee you that your pot pie bites won’t be that nicely formed coming out of the oven.

“Chicken meat with vegetables in a flaky pie dough”, promises the box of Trader Joe’s Chicken Pot Pie Bites. There’s nothing fundamentally wrong with this description, but I’d suggest switching the word order around. Flaky pie dough with chicken and vegetables is considerably more accurate.

If you come to pot pies mainly for the flaky, buttery crust then this the pot pie for you. It will suffice for you to stop reading this post now and pop on down to your local TJ’s. If, on the other hand, you come to chicken pot pie for the chicken, or other intra-pie materials, then this is going to be a much tougher sell.

There’s nothing inherently wrong with Trader Joe’s Chicken Pot Pie Bites. The filling is made with yummy little bits of chicken, creamy sauce, peas, carrots, etc – all the stuff you’d expect, and all done well and tasty. As already mentioned, the crust is very good – in fact, it’s probably the best pot pie crust I’ve ever had. Crispy, buttery and flaky, never dry or tasteless, it’s a fine crust on a fine pot pie. The only problem is that there’s just so much of it. The pot pie bites are served up to as 12 individual tiny pot pies, each with their own complete pot pie crust. In theory this is the perfect pot pie upgrade for our take-it-anywhere, always-on-the-go mobile age. In practice it ends up being a whole lot of extra crust that undermines the entire nature of the pot pie.

You would imagine that in order to make a 1/12th scale pot pie, you would simply implement the culinary equivalent of a shrink ray and reduce all the pastry’s ingredients by 1/12th. In practice this doesn’t work. If you tried to make a pot pie crust that was 1/12th the thickness of an ordinary pot pie there wouldn’t be enough structural support to keep all the insides in and you’d end up with a just a little spot of burnt stew on a baking pan.

There’s a limit to how far down you can scale the crust. The problem Trader Joe’s encounters here is actual similar to the same reason giant insects don’t rule the world. Exoskeletons work really well for keeping bugs together as long as they’re relatively small. Start scaling up the size of an ant and you need a thicker and thicker carapace to keep it from falling all to pieces. The thicker the shell, however, the less room for the important stuff inside, hence the impossibility of ants the size of cars. Simply put, attempting to scale things at a 1:1 ratio breaks down pretty quickly in the real world.

In order to maintain the structural integrity of their mini pot pies, TJ’s has to use nearly the same thickness crust they’d use on a full sized pot pie. This means when you bite into a tiny pot pie, you’re getting something like 50% crust, and 50% filling on a good bite. This brings me back to our main point – if you’re a real crust fiend the talk of so much crust has probably got you pretty hot and bothered. If, on the other hand, you enjoy the traditional ratios of pot pie filling to pot pie crust these are going to be more interesting to you as a novelty than as real repast.

There’s a wonderful history of pot pies that is as long and colorful as it is dubiously apocryphal. Unfortunately, I don’t really have the time to get into it in this post. We’ll have to suffice with noting that the ancient Romans purportedly served pot pies filled with live birds at their banquets, a practice that, as the LA Times notes, “must have startled unwary guests.” Associated Press’s Tom Hoge, I would imagine that’s an understatement.

Sadly, we no longer live in a time where the diner must approach his pot pie warily lest he be overtaken by screeching, disoriented birds. Nevertheless, Trader Joe’s continues to enliven the pot pie tradition with novelty – even if in this case it’s more of a miss than a hit.

Would I Recommend It: Only to inveterate pot pie crust lovers.

Would I Buy It Again: I’ll buy a regular sized pot pie next time.

Final Synopsis: Good little pot pies that are as much crust as filling.