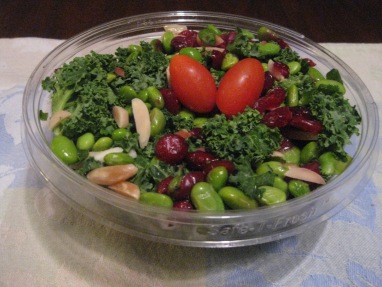 Well, it happened – a fall from grace I never saw coming. After and unending streak of not just good, but down right delicious salads, Trader Joe’s has finally served up a stinker.  A salad that’s not just kind of bad, or hard to get down, or somewhat unpalatable. No, I found Trader Joe’s Kale and Edamame Bistro Salad actually inedible. Inedible! There’s almost nothing from Trader Joe’s I’ve found inedible – and that’s coming from the guy who actually finished off Trader Joe’s gelatinous Shrimp Nuggets. I’ve even managed to finish of things I don’t like (like that tub of marinated beets). But with this salad I just couldn’t do it, and it wasn’t for lack of trying either. I really wanted to like this salad. Salad is one of my favorite foods in the world. For me, discovering a new salad is like unearthing a small, rare treasure. How could this have happened?

Before I launch into my criticism here, I’m perfectly willing to admit that it’s probably my fault that I didn’t enjoy this salad. Trader Joe’s has such a stellar record with their salads that it’s hard for me to accept that they could put out one so completely unpalatable. The far more likely scenario is that I’m an uncultured heathen whose crude taste buds failed to appreciate the higher art the salad was devised by. I’m fully expecting to see some resounding condemnations of my review in the comment section and, frankly, I welcome them. I’d rather live in a world where I’m a confused nitwit than a world where Trader Joe’s puts out lame salads.

Okay, so on to the salad.

It’s awful, guys. Nothing in it really seems to work. I should have maybe been tipped off to this by the name – a combination of kale, soy beans, and sweetened cranberries just sounds like trouble. On the other hand, there’s nothing about roasted squash, quinoa and wheatberries that sounds like they’d be particularly delicious and I enjoy that salad so much that I’m actually eating it now, as I type this.

The first problem with the Kale and Edamame sald is, I think, the kale. There’s no other green in the salad but kale. I like me some kale in my salad – I loved TJ’s Cruciferous Crunch for exactly that reason – but kale needs to be used sparingly. It’s wonderful for texture and body, but when you make your salad out of nothing but kale, like TJ’s did here, it feels like you’re eating a pine tree from the tip down.

If you can get past the kale, you’ve still got to deal with the gangs of edamame soybeans, cranberries, grape tomatoes and scallions. These tastes just simply did not go together well for me.  The sweetness of the cranberries fought against the waxiness of the beans, and the scallions practically reeked, overpowering the other tastes. The big, button-sized beans and whole tomatoes didn’t help either, it just made it so I had to take lots of giant mouthfuls.

Finally, and perhaps worst of all, was the salad dressing. The package bills it as a lemon herb dressing, and I had hope for it. The dressing looked thick and creamy perhaps, I reasoned, it would have just the right flavor to balance the rest of the salad’s intense elements. Sadly, it did not. The lemon herb dressing lacks sweetness, or tanginess or depth. What it delivers seemed more like mustard to me than anything – harsh and astringent, clashing with everything else in the bowl.

It was after the addition of the dressing, when I found myself sitting there chewing a huge mouthful of chopped kale covered with lemon juice and pungent herbs, that I simply put the fork down. I couldn’t go on. I need at least one good element in a food to muscle my way through it, one ray of light. In the case of Trader Joe’s Kale and Edamame Salad I couldn’t find any.

Would I Recommend It: No, just no.

Would I Buy It Again: It was such an unpleasant experience that I might have to get it again, just to convince myself it was real.