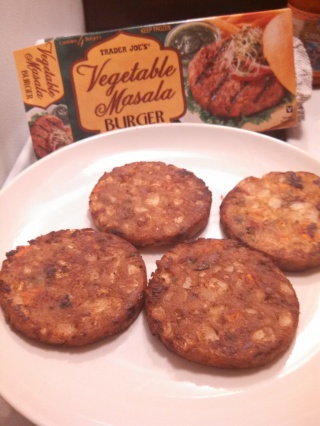 Making due on an overdue promise I made when reviewing TJ’s excellent Pizza Veggie Burgers, today I decided to try out Trader Joe’s Vegetable Masala Burger. What I got was a tasty bit of Indian cooking in a strange new form.

These two burgers, pizza and masala, are closely linked despite their completely different tastes. Obvisously they are both veggies burgers, but more than that they are veggies burgers that refuse to conform to the standard veggie burger model. Like Trader Joe’s Pizza Veggie Burger before it, the Vegetable Masala Burger has dared to ask the question, what if a veggie burger didn’t try to taste like a hamburger at all? It’s an ingenious solution that sidesteps the pitfall of trying to ape in greens what meat already is. You’re never going to out burger a burger with condensed tofu, the only way to win is to not play the game in the first place.

This is the highest form of vegetarianism, the food item that’s not a “meatless” version of something else, not a substitute or alternative to the mainstream, but a unique and delicious meal in its own right. You’re not giving something up to eat this burger, you’re getting something new.

Before we get into what I think was strange about the burger, I’d better give you a run down of how it tastes. Masala simply means “a mixture of spices” and the term is used throughout south east Asia. The masala Trader Joe’s uses here is mysteriously only described as “spices” on the ingredient label, but from the taste of it all the usual suspects are here. Tumeric, cardamom and cumin all mingle with the hearty mixture of veggies, which very visibly includes potatoes, carrots, green beans and bell peppers. The resultant patty is dense, and redolent of spices when lightly toasted on the stove. It both looks and tastes like a hearty vegetable soup without the soup. In particular, the veggies are all soft and toothsome, a pleasure to eat even if the patty tends to disintegrate too easily while you eat it. As for the spices, they’re strong enough that they give the burger a warm and authentic flavor, but mild enough that you might consider dressing them up with a condiment – be it ketchup or chutney. Another selling point, and relief to veterans of the veggie burger world, the masala burgers don’t include soy of any kind, relying instead on breadcrumbs to bind the veggie mix together.

What’s strange to me is that they market these as burgers at all. Where Trader Joe’s pizza burger tried to at least give you the semblance and feel of a burger, the masala burger goes complete off the beaten path. From taste to texture, there’s nothing particularly “burger-y” about these burgers beyond the fact that they’re puck shaped. It’s even stranger when you regard the huge bits of potato and other vegetables roughly shouldering each other right up there at the surface. The veggie pizza burger sort of managed to look like a burger from a distance. With such large and vulgar vegetable chunks, these masala burgers wouldn’t fool a near-sighted sloth.

It almost seems unnatural that Trader Joe’s has forced the vegetables into this shape at all. The way the whole thing comes apart as soon as you stick a fork in them makes you wonder exactly who we’re fooling by going through the trouble of corralling them into a burger shape in the first place. They might more accurately be called Trader Joe’s Cooked Indian Veggies That We Packed Into A Cylindrical Shape, although I suspect that may not have gotten past the Marketing department. Trader Joe’s may have hung onto the name, but make no mistake – these burgers defy the genre in every other way.

Would I Recommend Them: Yes, to vegetarians and carnivores alike.

Would I Buy Them Again: Probably not, honestly. I’ll eat burgers for my burgers and enjoy my Indian food on a plate. 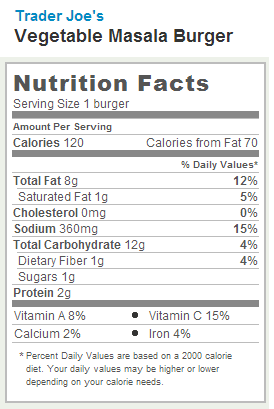