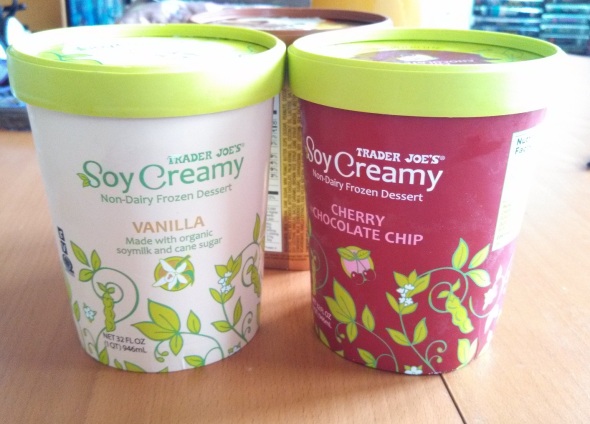 You may ignore the third container behind them. He has no bearing upon this tale.

To be honest, I picked up Trader Joe’s Organic Soy Creamy Non-Dairy Frozen Dessert (aka vegan ice cream) because I feel sorry for vegans.

I probably shouldn’t, I know that vegans and vegetarians and pescatarians and whatever all else there is are perfectly capable of looking after themselves, but I still feel sorry for them. It’s a crazy, meat eating world out here in America. If people aren’t spraining their jaws exalting the wonders of bacon, they’re drooling over commercials for monstrous, meat soaked burgers. Occasionally I try and put myself in the shoes of a person who, for reasons of personal ethics or personal health, has chosen not to eat meat.

What if the tables were turned, I sometimes wonder, and was in the minority? What if, for example, 99% of restaurants served dog and dog based dishes? What if TV, print media and the internet were plastered in ads showing people taking loving mouthfuls of hot, roasted dog. What if people not only went on at length about how many delicious puppies they ate last night, but would even go so far as to ridicule me for not eating dogs, and bemoan my stubborn refusal to just give in already and start eating puppies like everyone else.

So yes, I bought all the flavors of Soy Creamy Non-Dairy Frozen Desert because I want to morally support my vegan friends (okay…friend) who comes over sometimes. What I was shocked to discover, is that soy based ice cream is great!

I was every bit as surprised as you. As we’ve discussed over “healthy” guacamole and veggie patties, there’s usually a price to pay for healthy and/or vegetarian cuisine. That price is taste. If something is good for you, it doesn’t usually taste very good, and if something is bad for you it generally tastes amazing. That’s the inherent cruelty of life, and strong evidence that the Irish Catholic guilt-based version of God might be the accurate one. TJ’s Soy Creamy completely explodes this model. This vegan, non-dairy, organic, soy-based ice cream is equally as good as it’s dairy based counterpart. In fact, I might actually like it better.

Soy Creamy is just as sweet and creamy as any other grocery store ice cream you’re likely to find, creamier even. I assumed the “creamy” bit in the title was just a throw away marketing line. Not so – this stuff is seriously smooth. Something about the vegan make up of Soy Creamy keeps it from freezing solid in your freezer. We all know that problem, hammering away at the top of an ice-hard lump of caramel ripple, denting up the spoon in an attempt to get out two or three teaspoons worth of ice cream. The vegan ice cream doesn’t have this problem – every spoonful comes out smooth and easy, but still stiff, and melts on the tongue with a full bodied flavor. It strikes the perfect balance between soft-serve and the real stuff.

The flavors are great as well. The vanilla tastes wonderfully rich and  perfectly decadent. A bowl of it will leave every bit as satisfied as any milk based alternative. The cherry chocolate chip was also good, but this has never been my favorite flavor, even in the non-dairy world. The combination of chocolate chunks and mild cherry flavor doesn’t work any better as a vegan dish, leaving me equally nonplussed.

The only thing I can imagine that might put people off of Trader Joe’s Soy Creamy is that the aftertaste is different from the aftertaste of dairy based ice cream. You might notice a mild aftertaste of beans a few minutes after finishing off a bowl. Is that a bad thing? I suppose that depends on how you feel about the taste of edamame. For my count, I found it mild enough to right it off entirely. Plus, it’s more than compensated for by the healthy nutrtional profile.

In addition to being totally organic, which it is, the soy cream also has less fat and fewer calories per serving. Trader Joe’s French Vanilla Ice Cream, for example, has 260 calories and 16 grams of fat per serving – compared to the 180 calories and 8 grams of fat in the Vanilla Soy Creamy. Even if you have trouble grappling with the concept of a non-dairy ice cream, the calorie count couldn’t be a more eloquent argument in it’s favor. Eat twice as much for the same amount of calories? I’m on board.

So yeah, I like it. In fact, with the summer coming around the corner I’m libel to buy a lot more. In fact, I might even start buying this exclusively whenever I have a hankering for chocolate or vanilla ice cream. Am I crazy? Arguably, but you’ll just have to try some and find out.

Would I Recommend It: Yes, this is your go to organic ice cream, so or not.

Would I Buy It Again: I may never go back to dairy ice cream.

Final Synopsis: Vegan ice cream that as good as the real thing. 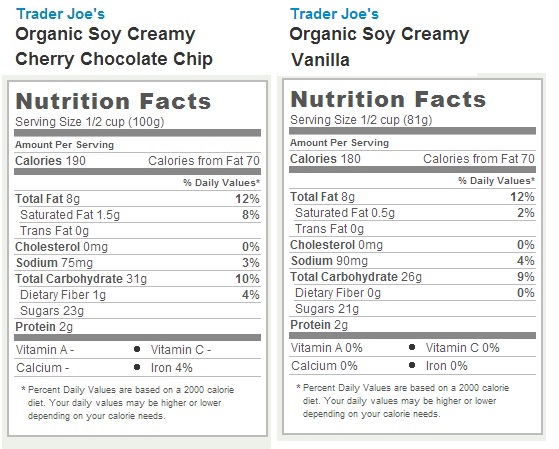