I certainly do love Thai food – or, more accurately, I love pad thai, and the rest of Thai cuisine is pretty good as well. Odds are that you love pad thai as well – this is double true if you happen to be a Thai national, as pad thai is the national dish in your country. However, even for the 99.98% of my audience that isn’t Thai, it’s still pretty likely that you love pad thai. In fact, pad thai is so highly regarded world wide that it was voted 5th most delicious food in the world by CNN in 2011. And while that may just the result of a fluff-piece poll in a desperate bid to get clicks, it also seems like it’s about right.

It is intriguing, then to come across Trader Joe’s vegetable “true Thai” pad thai in the frozen food aisle. With a promise of being 100% vegan, and a five minute microwaveable meal, Trader Joe’s was setting itself some pretty considerable hurdles TJ’s already proved that they could deliver on Thai street food with their green curry and GABA rice, but could they pull it off again? Fortunately, the answer is a firm yes.

If you enjoy this pad thai, don’t forget to give a quick thanks to Mr. Plaek Phibunsongkhram, one of the most important figures in Thai history, owner of an amazing name, and the person solely responsible for the modern day popularity of the dish. Prime minister of Thailand and de factor dictator during the the WWII years, Phibunsongkhram is a complex character, but the most important thing he did (within the context of this post) is give pad thai the name “pad thai”. Why focus his rather weighty attention on this one dish? The answer, of course, is geo-politics! With World War II raging around them, Phibun wanted to promote Thai nationalism and centralization while reducing domestic demand for rice. He managed to do all this by raising pad thai, and it’s noodles, to a prominent place in Thai culture. The result was an explosion in popularity across Thailand, and from there across the rest of the world.

Trader Joe’s Vegetable Pad Thai delivers not just as a delicious vegan meal, and as a delicious microwaveable meal, but as a delicious meal period. There’s a lot going on in a pad thai – from the bean sprouts, to the rice noodles, to the tofu and veggies, to the sauces. On each front TJ keeps things simple and natural. There isn’t an artificial ingredient to be found in the whole pot – just a vareity of vegetables mixed with water.

That natural simplicity plays out in the dish as a refreshing, wholesome taste – even when its just been been defrosted frosted from frozen. The bean sprouts, which make up the bulk of the dish, still retain some of their juicy crispness, even after being steamed in the microwave, and the rice noodles are suitably chewy and rich with the flavor of the creamy, mildly piquant pad thai sauce (a mix of chili sauce, tamarind sauce, and tomato paste).

The sauce isn’t quite as strong here as it is on other pad thai that you’ve probably had. Part of the reason for that is the absence of fish sauce in the dish. Although not a mandatory ingredient for authentic pad thai, the pungent, musky body of fish sauce gives pad thai a savory second kick underneath the noodles and chili paste. Although it’s missing here in order to keep the dish vegan, it doesn’t degrade the quality of the dish below satisfaction. There’s still enough harmony between the spicy, sweet and salty elements that it carries the rest of the dish along. This is particularly important when it comes to the tofu, which usually needs as much help as it can get. The tofu does manage to make it through alright, again thanks to the sauce, but it isn’t the best processed soybean mash you’ve ever had. The cubes are small, which is to its advantage, because they freezing process was not kind to them – rendering each tofu cube into a tough, chewy customers. While not exactly toothsome, without any meat or fish in the dish, they firmness of the tofu does lend the dish some much needed body.

Over all it works. It’s not going to be the most delicious pad thai you’ve ever had in your life, but for frozen, all-vegan pad thai it’s suitably impressive. The only strange touch is the crushed cashew nuts used in place of crushed peanuts. Whatever the rationale was behind that decision is hidden from my faculties, but it’s a moot point anyway since the nuts are undetectable except as points of crunchy texture,

This dish can be enjoyed as a tasty, vegan option, or just in its own right as a quick and easy dinner. Once caveat, however – bring your own limes. Evidently not even Trader Joe’s could figure out a good way to fit freeze-dried lime juice into the dish, and its the one flavor that the dish is noticeably missing. Get yourself a wedge to squeeze over the dish, and you won’t have any complaints.

Would I Recommend It: Yes – the vegans and non-vegans alike.

Would I Buy It Again: I would, this is perfect for filling in last minute dinner ideas.

Final Synopsis: Delicious, microwaveable pad thai – as long as you have a lime wedge on hand. 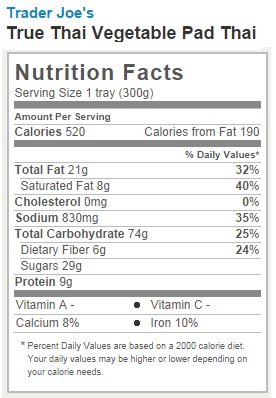