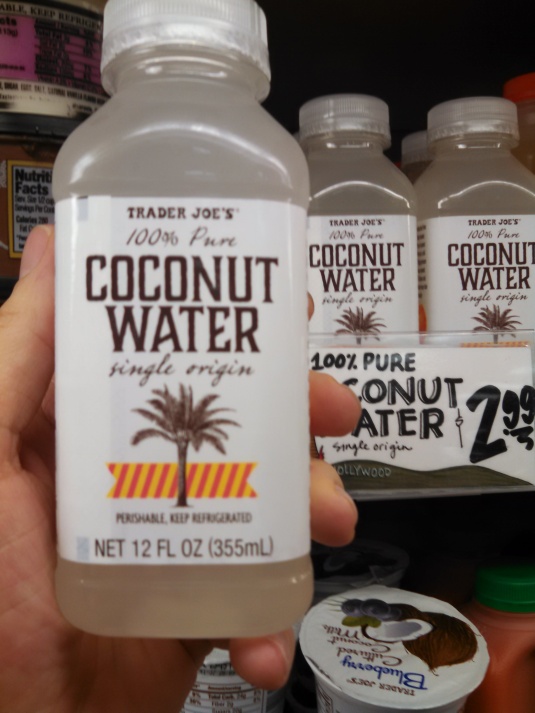 I’m used to seeing coconut water peddled in large cartons, usually with some sort of semi-novel tetra-pack packaging – so coming across Trader Joe’s new 100% Pure Coconut Water in a tiny little 12 oz plastic bottle was a surprise. Even more surprising was the $2.99 price tag. Wait – seriously? Doesn’t Trader Joe’s already peddle a 750ml box of Pure Coconut Water for that exact same price? Just feet away on a nearby shelf? Do they really expect me to pay more than twice as much for the same amount of coconut water? They must think this is some seriously good stuff.

As I talk about in my earlier post on coconut water, Trader Joe’s made me a coconut water convert. Yes, I still think it tastes sort of weird and is painfully trendy – but it’s also an absolutely amazing (and natural) way to get massively hydrated. So I’m more than willing to be receptive to TJ’s new take on coconut water – but with this sort of price differential they going to have to make one hell of a case.

When you crack this bottle open and take a sip, the first thing you’ll notice is that it is actually pretty similar to Trader Joe’s other coconut water. This certainly puts it leaps and bounds ahead of many of the commercial coconut waters on the market (Zico, VitaCoco, etc, etc, etc) but doesn’t exactly make the case for that bigger price tag. Sure, there are some subtle taste differences that can be dissected – this Single Origin Coconut water seems to go down a little “smoother” and seems to taste a little fresher – but this is largely splitting hairs.

So if they taste the same, why the big price difference. That, of course, is because of the “single origin” quality, featured on the label. As TJ themselves explain on the side, each bottle is derived from a coconuts grown only in Thailand, with 1.5 coconuts going into each bottle. Hence the “single origin” label. While that may be somewhat underwhelming  (defining “single origin” as originating within the same general country doesn’t particularly impress me), they also make use of a cold water method of pasteurization called HPP or high-pressure processing, thereby avoiding high temperature pasteurization which degrades the nutritive qualities inherent in the water

Basically, at this point, I could get into exactly what that entails – but it matters less than what Trader Joe’s is really trying to do with all this fancy labeling. True coconut water purists – those who turning to coconut wateras a lifestyle choice  – pay considerable attention to the origin and method of pasteurization of their water. For instance, this blog post goes into depth at great length about the various  virtues and sins committed by coconut water bottlers. Trader Joe’s new 100% Pure Single Origin Coconut Water is Trader Joe’s response to these concerns – a coconut water targeted at the discerning coconut water drinker.

While that’s all well and wonderful, what does it mean to someone like me who already enjoys Trader Joe’s existing coconut water offerings fairly well, and technical discussions of pasteurization processes very little. For that person, you can safely ignore this little bottle and continue to purchase the big carton, as usual. You can imagine the difference between these two as something like the difference between Perrier bottled water and Arrowhead. By all means, go for the Perrier if you fancy yourself a bottled water connoisseur, or have the money to spare. For everyone else, the difference between the two will be less than the pressure on your wallet.

Would I Recommend It: Only to serious coconut water enthusiasts.

Would I Buy It Again: I’ll be sticking with TJ’s other coconut water.