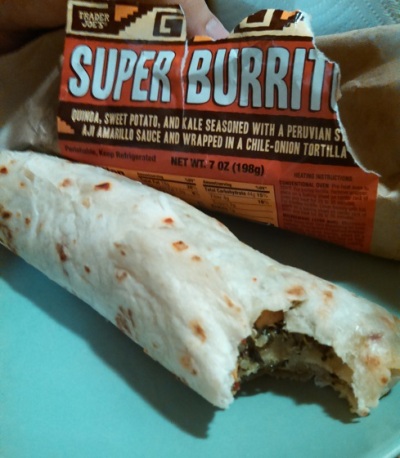 The kind of burrito ancient Peruvians were probably chowing down on all the time.

What this now – a Super Burrito? A Super Burrito with an exclamation mark and everything?! Oh wow, it must be like, the bigget, cheesiest, meatiest, most ass-kicking tube of molten sodium this side of the Taco Bell late night menu. Let’s just see what we’ve here –  quinoa, kale, sweet potato… wait a minute – this isn’t a Super Burrito, it’s a Super FOOD Burrito. Gah! Trader Joe’s you’ve snookered me again! I’ve bought healthy, filling cuisine when I was hoping for a heart-clogging cylinder of refried beans and queso.

Actually, I suppose I can’t Trader Joe’s you for leaving the “food” part out of their Super (Food) Burrito. There’s little to nothing about quinoa, kale, et al. that inclines one to think it would make for a satisfying, quick and dirty microwaveable Mexican food indulgence. Ah, but how wrong we are, us’n who equate only ground beef and melty cheese sauce with good burritos. Trader Joe’s delivers a downright hearty, filling and tasty blast of spicy southwestern cuisine that, if I hadn’t been tricked into it, I’d never have bothered to try.

First of all, yes, you’re correct – there’s no meat in this burrito. It’s entirely vegetarian and vegan friendly, yet even meat lovers can find something to love in this nutritious tortilla wrap.

We’ve covered quinoa, that ancient psuedo-grain, several times before – but for all the health claims that swirl around quinoa one is certifiably true – it really does do a good job of filling you up. A mix of red quinoa and gold quinoa make up the bulk of this burrito, and while they bring their trademark pearl-like texture to the mix, they’ve been cooked long enough and well enough that there isn’t any coarseness to the burrito – each bite is smooth and almost creamy. This smoothness is helped along by the large, soft pieces of golden sweet potato that help the quinoa fill out the burrito. Again, these have been cooked to a pleasing softness and go down easy. Kale makes for the third big ingredient, but despite my fears, it was mild and hard to detect from bite to bite. Kale, with it’s high nutrient, vitamin and mineral denseness has a tendency to scare off all but the most health-food focused, but here it makes nary a wave – chopped and stewed into yet another mild, easy on the tongue ingredient.

What you do notice is the spiciness. The filling is spiced with aji amarillo chili sauce, made from the small, orangish and quintessentially Peruvian chili pepper, and the tortilla is seasoned with red pepper flakes. This gives the burrito considerably more spice than you might expect given the typically mild ingredients in the filling. Each bite delivers a little punch of fire that sears without burning and lends the whole affair some much needed spice that takes it up a notch in the flavor category.

I doubt I would have picked up this burrito if I’d suspected what was in it, but I’m glad I did. The flavors all play well together, the texture is even and smooth, and it cooks up in the microwave in about two minutes. This isn’t just a good vegan burrito, it’s a good burrito in general – and with only 44 grams of carbs and 18 grams of fat it’s a pretty damn healthy one too boot.

Would I Recommend It: I would – it finds a comfortable intersection between taste and nutrition.

Would I Buy It Again: It surprises even myself to say so, but yes I would buy this vegan burrito again.

Final Synopsis: A quinoa-based, vegan burrito that is actually worth checking out.