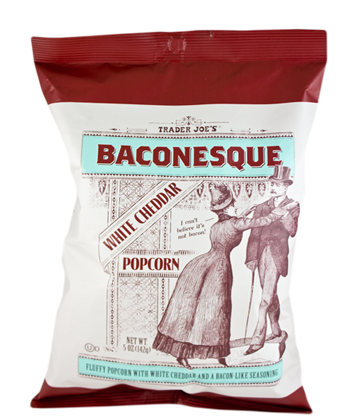 You know how much you like bacon? Well this doesn’t have any.

It’s hard to know what to say about Trader Joe’s Baconesque White Cheddar Popcorn. It’s unusual certainly – the most unusual popcorn I’ve had since Trader Joe’s last weird popcorn experiment (or maybe the one before that) – but unusual in a very different way. This popcorn is, weirdly, exactly what it says – a vaguely bacon-y kind of popcorn. Not bacon popcorn, not popcorn with bacon bits, bacon flakes or even real bacon flavor, but a bacon-esque popcorn. Popcorn, in this case, that has been infused with a fake bacon smoke flavor. That fake bacon flavor is mingled with an intense white cheddar cheese powder results in a bizarre, slightly off-putting, but addictive snack.

I’ve written before on my opinion of bacon-mania. Although longer lasting than many of the food fads that have swept the nation, it stills shares the same quality of food fads everywhere – whether it be bacon vodka, or chocolate covered bacon, novelty comes first and quality is the afterthought. So when I see a new bacon gimmick on the self I’m immediately skeptical.

Does Trader Joe’s Baconesque Popcorn actually qualify as bacon though? Kind of… but not really. Normally I’d criticize a product for something like that, but in this case that’s what they’re actually advertising right on the bag. They promise fake bacon flavor and they deliver fake bacon flavor – should they penalized for that, or just stared at agog? They make it abundantly clear that in lieu of real bacon or bacon flavoring you will be getting “natural smoke flavor”. A psuedo-flavor that is sort of like putting your nose right above a sizzingly BBQ.

“Natural smoke flavor” is the same thing as “liquid smoke”, which really is actually made from smoke. It’s usually made by burning hickory or mesquite wood and capturing and concentrating the resulting smoke in a liquid medium. The resulting taste is a general sort of heavily-cooked meatiness. There isn’t anything screamingly bacon-y about it, certainly nothing resembling the heady, savory tastes of Trader Joe’s incredible Apple Smoked or Black Forest bacons. It tastes much more like these pieces of popcorn were mixed with a few heaping handfuls of Baco Bits – those hard, granuated bacon imitators people put on baked potatoes and what have you.

This strong and perplexing taste is combined with the equally strident taste of white cheddar – every bit as mouth blastingly cheesy as you would expect as if this popcorn was bright orange. The combination of extremely fake bacon flavor with extremely strong cheese flavor makes for one intense popcorn snack.

I personally found the roller coaster ride of flavors interesting enough to come back to bag more than once – although each time I limited myself to just a kernel or two. This would be extremely hard stuff to munch down like your standard movie theater popcorn. It’s much better treated like a tin of sardines or a plate of olives – as an over the top flavor to be sampled in small quantities.

Would I Recommend It: Probably not. The fake bacon taste is somewhat off putting.

Would I Buy It Again: I might, I like a snack that demands you muse on it rather than gobble it down.

Final Synopsis: Like cheesy popcorn with a bunch of Baco bits mixed in.