Trader Joe’s Popcorn in a Pickle 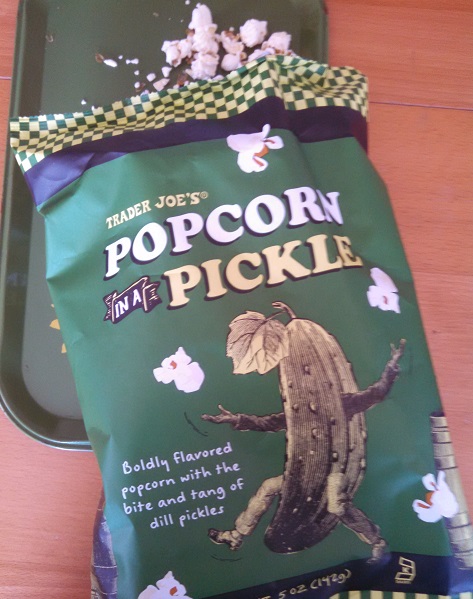 Trader Joe’s Popcorn in a Pickle is pickle brine flavored popcorn. Let’s just get that out of the way up top.

I thought, perhaps, that Trader Joe’s mad sciene-style popcorn high jinks had run their course. How sorely I was mistaken. Trader Joe’s new Popcorn in a Pickle is their wildest creation yet – a melding of ordinary salted popcorn and dill pickles.

When I was a kid I would sometimes put ketchup and mustard on my popcorn, and that got me branded as something of a local nut job. I daren’t think what would’ve happened if I’d started pouring liberal doses of pickle brine on it too. Instituionalized, probably. Clearly Trader Joe’s doesn’t give a flying hoot what anyone things, because this is a boldly original taste that delivers exactly what they promise – this popcorn really does taste like dill pickles and, what’s more, it’s actually pretty good.

Full disclosure, I’m somewhat fond of pickle brine. I have, on more than one occasion, taken a sip from the pickle jar – just to get a touch of that unique, salt and vinegar flavor blast you don’t experience anywhere else in life.

This popcorn seems to be trading entirely on people who have felt the urge to that illicit thrill – the brine sippers who say, “Bitter? Salty? Herbal? Sour? Just what I’m looking for!” If you’re looking to replicate the the flavor, if not the feel, of a classic kosher dill (and it is, by the way, kosher) this popcorn has it all.

If that’s not you, you can safely give this popcorn a pass. Trader Joe’s is clearly counting on a very narrow slice of the market for this one. Of course, that’s exactly the sort of thing major chip manufacturers, like Lays, Pringles and Doritos, have been doing over the last couple years as they bring out increasingly outlandish flavors. I still see those Lay’s “Wasabi and Ginger” potato chips on store shelves. Sometimes even the most outlandish novelties can make that surprising change into a new classic.

Unlike many of those weird flavors, however, Trader Joe’s really nails the authenticity of what they’re going after. This isn’t a “dill pickle-ish” taste, in the way that, say, sour cream and onion potato chips are “sour cream and onion-ish”. These kernels taste like they were each soaked in a jar of pickle juice and left to dry out again. Like Trader Joe’s Bacon-esque popcorn, this is a popcorn to be savored slowly – not munched down by the idle handful. Each popped piece is saturated with so much pickle flavor that you’ll want to chew on one at a time.

If you love pickles, or live life with a fearless joie de vivre, try picking up a bag of this stuff while it lasts on the shelves. It’s easy to imagine it’ll have a limited run, and you’re not likely to find something like this ever again. On the other hand, if you’ve never felt an urge to sample a drip of brine then feel free to steer clear. This bold taste is for adventurous eaters only.

Would I Recommend It: Yes to the bold, no to the meek.

You know how much you like bacon? Well this doesn’t have any.

It’s hard to know what to say about Trader Joe’s Baconesque White Cheddar Popcorn. It’s unusual certainly – the most unusual popcorn I’ve had since Trader Joe’s last weird popcorn experiment (or maybe the one before that) – but unusual in a very different way. This popcorn is, weirdly, exactly what it says – a vaguely bacon-y kind of popcorn. Not bacon popcorn, not popcorn with bacon bits, bacon flakes or even real bacon flavor, but a bacon-esque popcorn. Popcorn, in this case, that has been infused with a fake bacon smoke flavor. That fake bacon flavor is mingled with an intense white cheddar cheese powder results in a bizarre, slightly off-putting, but addictive snack.

I’ve written before on my opinion of bacon-mania. Although longer lasting than many of the food fads that have swept the nation, it stills shares the same quality of food fads everywhere – whether it be bacon vodka, or chocolate covered bacon, novelty comes first and quality is the afterthought. So when I see a new bacon gimmick on the self I’m immediately skeptical.

Does Trader Joe’s Baconesque Popcorn actually qualify as bacon though? Kind of… but not really. Normally I’d criticize a product for something like that, but in this case that’s what they’re actually advertising right on the bag. They promise fake bacon flavor and they deliver fake bacon flavor – should they penalized for that, or just stared at agog? They make it abundantly clear that in lieu of real bacon or bacon flavoring you will be getting “natural smoke flavor”. A psuedo-flavor that is sort of like putting your nose right above a sizzingly BBQ.

“Natural smoke flavor” is the same thing as “liquid smoke”, which really is actually made from smoke. It’s usually made by burning hickory or mesquite wood and capturing and concentrating the resulting smoke in a liquid medium. The resulting taste is a general sort of heavily-cooked meatiness. There isn’t anything screamingly bacon-y about it, certainly nothing resembling the heady, savory tastes of Trader Joe’s incredible Apple Smoked or Black Forest bacons. It tastes much more like these pieces of popcorn were mixed with a few heaping handfuls of Baco Bits – those hard, granuated bacon imitators people put on baked potatoes and what have you.

This strong and perplexing taste is combined with the equally strident taste of white cheddar – every bit as mouth blastingly cheesy as you would expect as if this popcorn was bright orange. The combination of extremely fake bacon flavor with extremely strong cheese flavor makes for one intense popcorn snack.

I personally found the roller coaster ride of flavors interesting enough to come back to bag more than once – although each time I limited myself to just a kernel or two. This would be extremely hard stuff to munch down like your standard movie theater popcorn. It’s much better treated like a tin of sardines or a plate of olives – as an over the top flavor to be sampled in small quantities.

Would I Recommend It: Probably not. The fake bacon taste is somewhat off putting.

Would I Buy It Again: I might, I like a snack that demands you muse on it rather than gobble it down.

Final Synopsis: Like cheesy popcorn with a bunch of Baco bits mixed in. 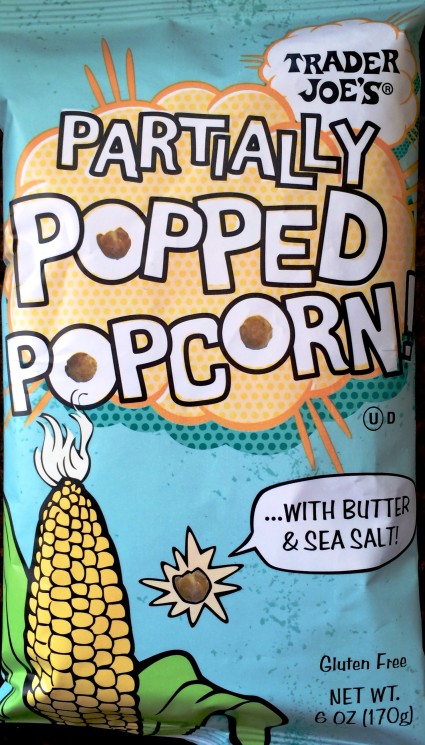 Trader Joe’s Partiall yPopped Popcorn is, astoundingly, exactly what it sounds like. Ever tried to pop a bag of popcorn in a microwave? You know htose partially popped kernles that are lawys left on the botto? That’s what this is. An entire bag of nothing but popcorn rejects. Essentially, Trader JOe’s has hit on the idea of selling you some of the trash you would normally throw out.

But wait. Is it trash? After all, who among us hasn’t found themselves idly trying to munch on some of the half-budded misfit kernels when all the good popcorn is gone. Is it true that not only have you tried to eat these kernels, but that maybe, every now and then, you have found one that was semi-popped in just the right way, formed just enought that it crunched beneath the teeth with an enjoyable, salty little crunch?

Friends and readers, I’m shocked to see myself write this, but Trader Joe’s Partially Popped Popcorn is not just good, but strangely addicting. –addicting in the weirdly compulsive way that leads you to repeatedly chawing on those partially cooked kernels in your own Pop Secret bag. The difference here is that the kernels in this bag are all precisely cooked as to be half-popped, fully roasted and pleasantly  chompable, without any molar-busting, underdone seeds in the mix. The result is more like a roasted Corn Nut than anything else. They have about that same level of sturdy, hard-shelled integrity, that gives way to a crunchy, salty core after a brief moment of tense, inter-dental resistance.

A nutty crunchy, salty, snack – that’s what these really are at the bottom of it, despite their strange origins. Maybe Trader Joe’s isn’t peddling us their rejects, so much as they’ve discovered a previously untapped resource.

Would I Recommend Them: It’d be hard to, without being laughed at.

Would I Buy Them Again: Yeah, I would. I love Corn Nuts.

Yeah go ahead, might as well throw some flax seeds in there too.

Trader Joe’s doesn’t care if everyone else is giving their food products catchy, memorable or even easily paresable names. No, what they’re going for is completionism, and they aren’t going to stop adding words to their product name until it contains as many ingredients as they can get away with. Thus is the case with TJ’s Kettle Popped Popcorn chips – a sweet and salty hybrid snack that dares ask the question, “What would happen if you tried making tortilla chips out of kettle corn?”

I may slight Trader Joe’s for their gaffs, but I love them for just these feats of daring audacity. Obviously no sane person would try to take fully popped sweet and salt kettle corn, then try and compress them down into flat discs. Leave the popcorn to the popcorn and the chips to the chips, the average consumer might say – their sense of normalcy firmly ingrained by the stream of mundane products churned out by mainstream grocers. Not only has TJ’s just made chips out of popcorn, but they went ahead and started throwing in whole fistfuls of quinoa, sunflower seeds, and chia seeds in as well. I’m going to give them full points for thinking outside the box on this one.

That said, are they any good. Well, as you might imagine from such a hybrid snack, it does many things serviceably, but nothing amazingly. While shaped like chips, they certainly don’t behave like chips. That is to say, these popcorn chips can’t be dipped or dunked. Their popcorn nature makes them much to fragile for that. The only thing that the chip nature is good for is to give a home for all the seeds.

The scattering of quinoa, sunflower, and flax seeds give the otherwise ordinary kettle corn a nuttier taste and a sort of extra intriguing crunch. However, because the chips are so fragile they tend to break up immediately in the mouth, so there isn’t really much time to appreciate it. I like the idea of mixing in those seeds, but unlike, say, Trader Joe’s Super Seeded Tortilla Chips, these just don’t hang around long enough to have much of an impact. It almost seems like a waste of the seeds, and an unnecessary source of additional fat.

The kettle corn itself is quite tasty – just the right amount of salty and sweet that makes it such a treat. However, it begs the question, why wouldn’t I just buy a regular bag of kettle corn if that’s what I was after? The only real advantage, as far as I see, is that it’s easier to be aware of how many “chips” you eat. Regular popcorn is such an amorphous collection of tiny things that I tend to eat more than I realize- munching down kernel after kernel. In chip form it’s easier to realize “Whoops – that was a dozen chips, better lay off.”

Would I Recommend It: No, just go pick up some regular kettle corn.

Would I Buy It Again: I’d give it a pass.