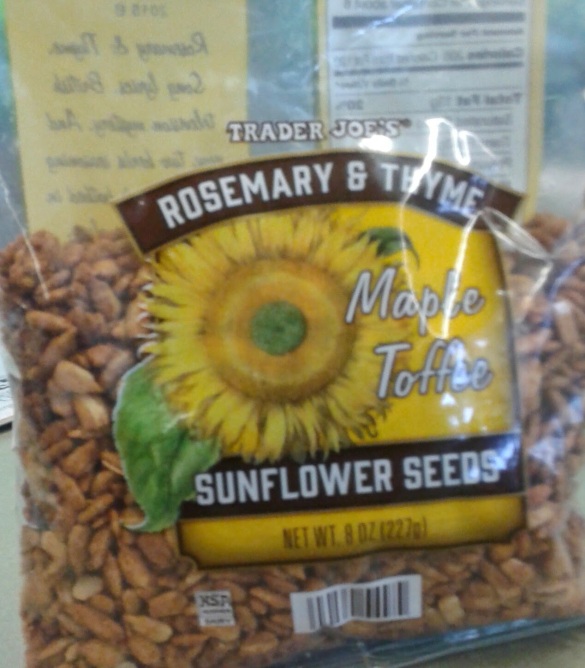 I…I don’t know where to begin on this one. It’s like someone just started free associating nouns and they decided to make it a product.

Every time – every time – I see something like this from Trader Joe’s I think to myself, “We’ll this is it – Trader Joe’s has gone as crazy as they possibly can.” Surely we won’t be seeing anything as crazy as partially popped popcorn kernels again. Or fried broccoli. Or a BBQ rub made from coffee grounds. And yet here we are – holding a bag of sunflower seeds in our hands, sunflower seeds that have been seasoned with rosemary, thyme and maple syrup. That’s really what these are – no tricks. Here’s the product copy, straight from the website:

“We took great care with our supplier to balance the natural herb flavors of rosemary and thyme with salt. Next, the seasoned seeds are coated in a mixture of maple syrup and salted butter, just before they are fire-roasted in small batches.”

Look at that, just look at that – you can practically hear the desperation of the copy writer as he strains himself to sound casually breezy. The struggle as he tries to convey that this is just some toffee and rosemary and whatever, no big deal – while he knows perfectly well that he’s never once in his life even heard of anyone doing this to any food product, let alone sunflower seeds.

I don’t know – maybe it’s me. Maybe I’m the one who’s gone crazy because I’ll tell you this much right now – these rosemary, thyme and toffee seeds are actually pretty good. Could a sane man dare utter that sentence? That very excellent question is beyond the scope of this blog post…all I can say right now is that Trader Joe’s is as skillful as they are brazenly daring. How else could you explain the delicately balanced mixture of spices, sugar and seeds that makes these snacks compulsively snackable?

I don’t know about you, but when I think rosemary I’m thinking, like, Rosemary Chicken levels of rosemary. BAM!-in-your-face, yup-that’s-rosemary, levels of rosemary. Trader Joe’s has been very careful not to give us that sort of rosemary here. There’s a bit more rosemary than salt on these seeds, but not by much. It’s just a hint of rosemary, along with an even more subdued touch of thyme, that you’ll taste behind the sweet and warm taste of crispy toffee.

If you think about these sunflower seeds as toffee-coated candied sunflower seeds, you’re on the right track. A handful of crunchy, sugary, maple toffee is what you’re going to mainly taste when you pop these in your mouth, followed by the familiar mildness of sunflower seeds, and only then will you notice the subtle but persistent touch of these two herbs, rosemary and thyme, which lingers long after the sweetness has faded. The seeds benefits from the light touch, and they’re easy to munch down, but in the end it’s still a strange taste that takes some getting used to.

Why Trader Joe’s even bothered to put rosemary and thyme in this mix at all, I don’t know. It seems like the logical move would’ve been to do something like cinnamon and nutmeg, or just to keep the herbs out of it all together. As it stands, this makes for a weird snack. Sweet and savory tastes rarely mesh well – and while these sunflower seeds are pretty good, the tastes ultimately clash more than harmonize.

Trader Joe’s has presented us with an intriguing new combination of flavors with these sunflower seeds, but it fails to make a persuasive case for its own existence.

Would I Recommend It: I wouldn’t – while they’re not bad, they’re probably too idiosyncratic to really catch on.

Would I Buy It Again: I really doubt it. They get points for daring though. 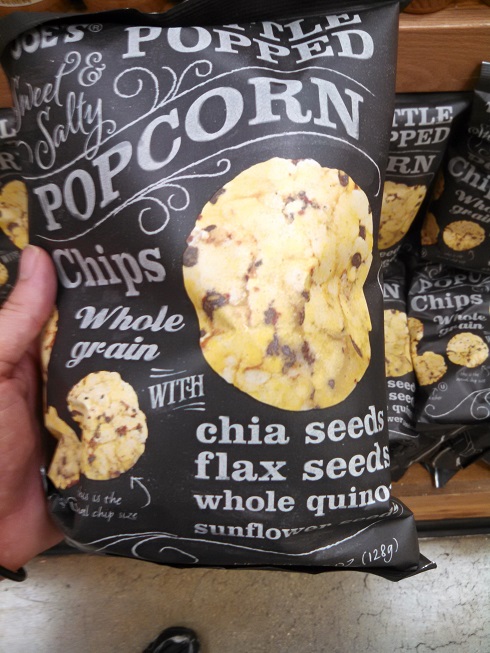 Yeah go ahead, might as well throw some flax seeds in there too.

Trader Joe’s doesn’t care if everyone else is giving their food products catchy, memorable or even easily paresable names. No, what they’re going for is completionism, and they aren’t going to stop adding words to their product name until it contains as many ingredients as they can get away with. Thus is the case with TJ’s Kettle Popped Popcorn chips – a sweet and salty hybrid snack that dares ask the question, “What would happen if you tried making tortilla chips out of kettle corn?”

I may slight Trader Joe’s for their gaffs, but I love them for just these feats of daring audacity. Obviously no sane person would try to take fully popped sweet and salt kettle corn, then try and compress them down into flat discs. Leave the popcorn to the popcorn and the chips to the chips, the average consumer might say – their sense of normalcy firmly ingrained by the stream of mundane products churned out by mainstream grocers. Not only has TJ’s just made chips out of popcorn, but they went ahead and started throwing in whole fistfuls of quinoa, sunflower seeds, and chia seeds in as well. I’m going to give them full points for thinking outside the box on this one.

That said, are they any good. Well, as you might imagine from such a hybrid snack, it does many things serviceably, but nothing amazingly. While shaped like chips, they certainly don’t behave like chips. That is to say, these popcorn chips can’t be dipped or dunked. Their popcorn nature makes them much to fragile for that. The only thing that the chip nature is good for is to give a home for all the seeds.

The scattering of quinoa, sunflower, and flax seeds give the otherwise ordinary kettle corn a nuttier taste and a sort of extra intriguing crunch. However, because the chips are so fragile they tend to break up immediately in the mouth, so there isn’t really much time to appreciate it. I like the idea of mixing in those seeds, but unlike, say, Trader Joe’s Super Seeded Tortilla Chips, these just don’t hang around long enough to have much of an impact. It almost seems like a waste of the seeds, and an unnecessary source of additional fat.

The kettle corn itself is quite tasty – just the right amount of salty and sweet that makes it such a treat. However, it begs the question, why wouldn’t I just buy a regular bag of kettle corn if that’s what I was after? The only real advantage, as far as I see, is that it’s easier to be aware of how many “chips” you eat. Regular popcorn is such an amorphous collection of tiny things that I tend to eat more than I realize- munching down kernel after kernel. In chip form it’s easier to realize “Whoops – that was a dozen chips, better lay off.”

Would I Recommend It: No, just go pick up some regular kettle corn.

Would I Buy It Again: I’d give it a pass.