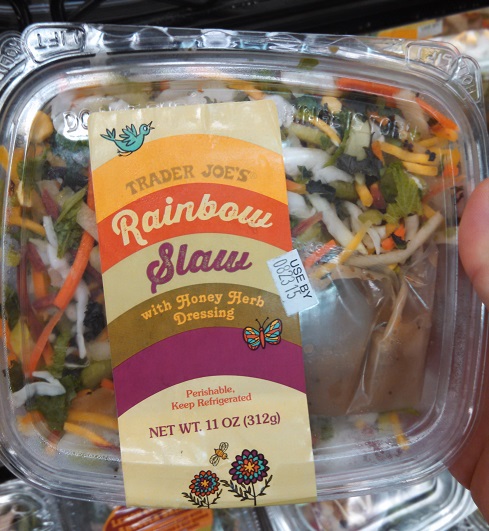 Trader Joe’s is no stranger to slaw based salads, so their new all-slaw salad might be unprecedented but isn’t a surprise. Like their broccoli slaw, and Chinese chicken salads before it, Trader Joe’s Rainbow Slaw Salad is a big pile of shredded veggies. What’s different about this version is the riot of colors and flavors at play.

Slaw has always been the laziest form of salad. Unlike some of Trader Joe’s rather well thought through salads – like the very pretty Grain Country salad – a slaw salad doesn’t have to worry about presentation or what to layer where or even freshness of produce, a slaw salad just runs everything through an industrial dicer and dumps the resulting shreds into a single, undifferentiated pile. Like “dump pies“, the result might well be tasty, but they don’t really impress anyone.

However, Trader Joe’s Rainbow Slaw Salad bucks this slaw trend. By combining a variety of colorful and tasty produce Trader Joe’s has produced a slaw salad that’s actually worth talking about.

Take one look at the Rainbow Slaw Salad and you’ll immediately notice two things – one, that this is a lot of slaw we’re looking at, and two, that it really is very colorful. At the very least, we can say that Trader Joe’s has fully delivered on the “rainbow” and “slaw” parts of the salad. In this case, the myriad of bright colors comes from the many colorful veggies that go into this really massively vegatatious salad. Said vegetables include cabbage, sweet onions, kale, celery, mustard greens, corn kernels, and every color of carrot from the aptly named Carrots of Many Colors. All julienned up together, the result is a truly rainbow-hued mix that ranges from pale yellow, through greens, yellow and reds to vivid purple.

Very nice to look at – but what about the taste? Is that also nice? Well, yes – I suppose. The Rainbow Slaw Salad tastes good in so far as it tastes very healthsome and nutritious – you can really taste the vitamins and nutrients in each vegetable packed bite. To balance out the all vegetables/all the time approach, TJ’s has also seeded the salad with finely chopped bits of tart green apple, which pop up here and there to inject a bit of sweetness.

The honey herb dressing – a sort of sweet, seasoned vinaigrette, helps to add a lot of life to the salad – perking up the greens with a light zestiness that does a good job heightening the natural flavors of the mix rather than masking them. As I chewed away at mouthful after mouthful, I couldn’t help but feel like I was appreciating the subtle sweetness and inherent flavor of these so often sidelined vegetables in a whole new light. If there’s one thing this salad does well, it’s letting wholesome veggies speak for themselves.

On the other hand, it’s certainly not the most delicious Trader Joe’s salad I’ve ever had. In fact, if I’m being honest, it doesn’t even rank in the top 50%. Placed back to back with the Bacon and Spinach salad, or even the Arugula and Pimento Salad, Rainbow Slaw just feels incomplete. While I liked what it was doing, if I was hungry for slaw and vinagraette, I’d be far more likely to pick up Trader Joe’s Honey-Glazed Miso Salmon Salad which does a lot of the same things, just a little better.

Would I Recommend It: Yes, it certainly makes for a good side.

Would I Buy It Again: Sure, if I wanted to add some veggies to a meaty entree.