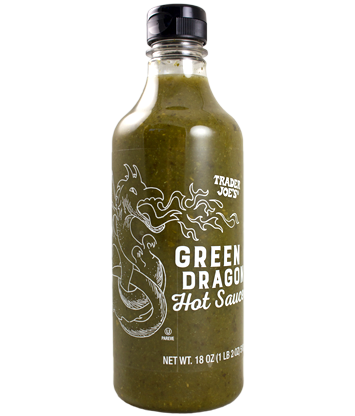 Ever since they introduced their own brand of (rather delicious) sriracha sauce last year, Trader Joe’s has been actively working it into as many different products as possible.  We’ve seen spicy sriracha ranch, sriracha BBQ sauce and, not to be overlooked, sweet sriracha glazed bacon jerky. These have been heady months.

What better time, then, to introduce a brand new form of hot sauce to the shelves – Trader Joe’s Green Dragon Hot Sauce – a bolder, hotter variation of their tasty sriracha.

I should note, just in passing, that this is a pattern that exactly follows what Trader Joe did with their amazing cookie butter. First, filling the shelves with as many cookie butter infused products as they could spin out (seriously, there’s a ton), then introducing a brand new member of the cookie butter family with their “Oreo” based cookie butter.

Although packaged in nearly identical bottles, and emblazoned with a similar dragon logo, there isn’t a lot of family resemblance between these two hot sauces. What’s different? For one, the green dragon looks a lot wussier than the rad red dragon – but more importantly the Green Dragon Hot Sauce dispenses with the flavorful, sweet tang of the red sriracha sauce in favor of a bolder, more herbaceous, and overall spicier taste.

The green color in the Green Dragon comes from replacing the ground chili peppers in the original sriracha sauce with a jalapeno and tomatillo pepper puree. You’ll find the same vinegar and garlic base in both, giving them that slightly acidic zing – however the new Green Dragon sauce also adds a strong dose of cilantro to the mix. This results in a very strong, earthy flavor that lingers long on the tongue.

The difference between these two sauces is almost like the difference between those famous, commonly related seasonings salt and pepper. The red sriracha sauce is more like salt – zippy, very flavorful and, for all intents and purposes, the more popular choice for putting on everything. On the other hand, the green pepper sauce is better for adding a more complex, heavier and spicier dimension to your food – and because  there’s so much cilantro on board, a few dashes is probably all you need of it.

In fact, cilantro has such a strong presence in this hot sauce, that I’ve found that it makes it particularly suitable for spicing up Mexican dishes – tasty with eggs (ranchero-style or otherwise), tacos, burritos… the whole enchilada. Combined with the distinctive taste of jalapeno and tomatillo peppers, this sauce feels as Mexican as it does Thai.

Trying them both back to back, I can’t help but prefer the red sriracha sauce. It’s still my go to hot sauce from Trader Joe’s – improving on Hoy Fong Foods famous rooster sauce by sticking closer to the authentic Thai recipe. However, while it may not get as much use as the red sauce, the green dragon sauce is still a welcome tool to have on the spice rack.

Would I Recommend It: I would – there aren’t a lot of sauces out there like this right now.

Would I Buy It Again: This bottle should last me a while, but I might pick up another one in a year next year.

Final Synopsis: A bold, spicy hot sauce with plenty of jalapeno and cilantro. 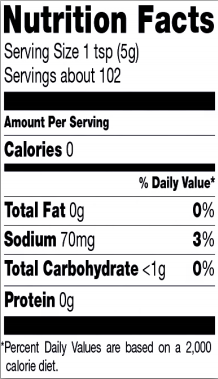