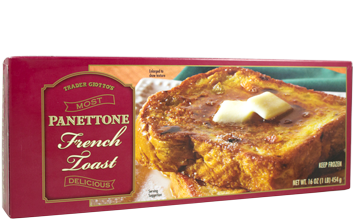 French bread, as we all know, is one of the most delicious breakfast options known to man – a top tier breakfast, right up there with oven-fresh cinnamon buns or heart-clogging monte cristos. It’s so good no one has really been bothered about innovating it much over the last few hundred years. No one, that is, until Trader Joe’s showed up on the scene. I should have seen it coming, given that we just saw them introduce such radical breakfast foods as candied-ginger pancakes, and pumpkin glazed cinnamon rolls, but Trader Joe’s has blown my mind again with their candied citrus and vanilla custard infused Panettone French Toast.

If you aren’t already familiar with the festive, bread-like cake known as panettone, you can read about some of Trader Joe’s previous takes on it here, for their classic panettone, or here, for their strange new pumpkin-infused panettone. Long story short, Italians like to fill sweet, airy breads with bits of candied fruit peel and globs of mascarpone and cream. Think of it as occupying the opposite end of the Festive Holiday Cake Spectrum from traditional English fruit cake – airy and buoyant instead of damp and dense.

If you, like myself, are not a big panettone fan, it’s likely you’ve got an issue with how dang bready the loaf is. I go to cake for cake and bread for bread – there’s not a lot of satisfaction from settling in at the half-way point.  However, in a real stroke of genius, Trader Joe’s has taken this perceived flaw and turned it into a strength. Too bready? Not if you’re making toast out of it. And that’s exactly what Trader Joe’s has done – they’ve reached into their stockpile of panettone, sliced them up, dipped them in some eggy custard and dropped them on the griddle. The fully cooked french toast is then frozen and boxed up for easy pre-heating. 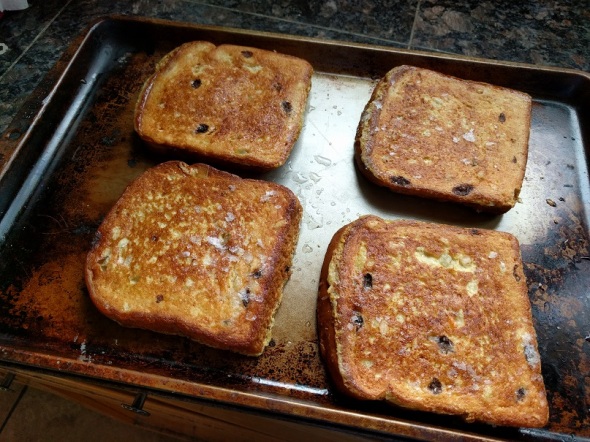 All four slices of toast – BEFORE going into the oven.

The result are thick slabs of french toast that happen to be studded with raisins and bits of candied fruit peel, here and there. I expected the french-toastification process to change the basic flavor of the panettone, but it hasn’t. These big slices of toast taste exactly as if you sawed a few slices off your Christmas panettone loaf and toasted them. Each bite is a bit stiff, a bit dry and, while denser than traditional panettone, still a bit airy. The candied citrus peel and raisins still taste just as they did before – sweet and sugary.

I didn’t find Trader Joe’s Panettone French Toast to be any better or worse than ordinary french toast, just different. The sweet fruits are an interesting touch, but unless you’re a huge fan of bits of candied fruit, they don’t really do much to elevate the french toast. That’s too bad, as I was ready for this french bread to blow my mind. It’s a perfectly find french toast, and if you don’t mind paying $3.49 for 4 slices of it, it makes for a sweet breakfast treat, but isn’t a game changer.

Would I Recommend It: Not especially strongly.

Would I Buy It Again: I don’t think so.

Final Synopsis: Not bad, but not amazing.