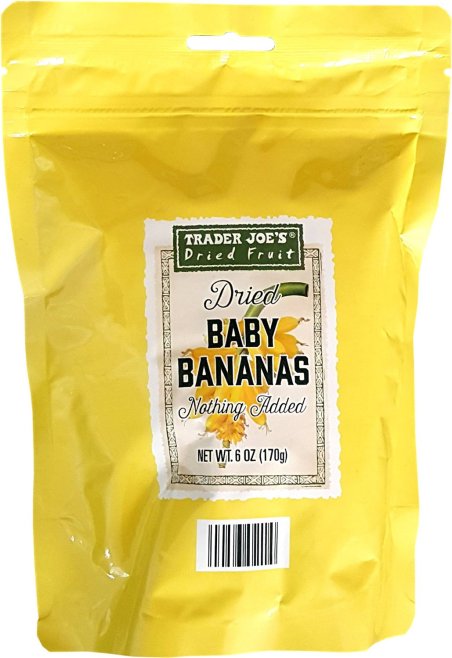 Before I get into talking about Trader Joe’s Dried Baby Bananas, I should probably acknowledge by absence lo, these last 4 months. After posting twice a week, every week for the last 4 years, I just got tired. That, combined with a new ad revenue sharing model implemented by WordPress (“Thanks for the increased traffic – we’d like to start paying you half as much.”) meant that a short Christmas hiatus turned into a long-term indefinite hiatus.

And honestly, that indefinite hiatus would probably still be going on if it wasn’t for two factors – first, Trader Joe’s started all but taunting me with some of the stuff they’ve been stocking, but more importantly, I received some very touching, very concerned e-mails from fans of the blog. I certainly wasn’t expecting that – and it simply melted my heart. Sure, I could get by without the blog, but how could I deny you, the reader, of my rambling, unprofessional, knee-jerk screeds? That’s what really kept me up at night.

So anyway, I’m back. I’ll be making a couple tweaks in the weeks to come – in particular I’ll be posting only once a week going forward, and maybe making some changes to the format, but really when Trader Joe’s comes out with whole baby bananas, dried into tiny, chewy brown fingers, the time has come again to weigh in.

These whole, dried bananas showed up a couple months ago, but I simply can’t get them off my mind. When it comes to dried fruit, I tend to think that there aren’t any real advances to be made in the field since, say, the Babylonians. It’s dried fruit – once they figured out you could dry fruit for storage it probably took them all of an afternoon to explore every available option. You wanna put apple slices in there? Sure, why not. Apricots? Orange slices?  Mango? Pretty straight forward stuff. Maybe someone remembered to try persimmons a day or two later. This is low tech, elemental stuff.

So why have I never before in my life seen whole dehydrated bananas? It’s certainly not because they’re not delicious, because these dehydrated baby bananas are the very definition of nature’s candy. Starting with whole baby bananas out of Thailand, Trader Joe’s simply dries them until they wrinkle up into desiccated, little brown fingerlings – a few inches long, and about half an inch wide. The sugar in the banana concentrates down as the bananas shrink, resulting in that mild, mellow banana sweetness and taste, only sweeter and stronger. Think jelly belly compared to jelly bean – more flavor in a smaller package.

The resulting texture is still soft, but also vaguely leathery and chewy – making them extremely enjoyable to snack on. This, combined with the wrinkled, flaccid, tanned appearance is perhaps a bit off putting. I’ll admit that the notion that this must be a little bit what munching on a mummy’s fingers would be like did flash through my brain on more than one occasion while eating these – however they’re so tasty and snackable that they easily overcome any reservations about texture or appearance.

Trader Joe’s suggests that these make an excellent snack for “little hands and large hands alike”, which only reinforces the whole “I’m eating fingers” thing, but still makes a good point. You may only get about 20 of these baby dried bananas per 6 oz. bag, but they satisfy so well, and are so cheap, that they should last a a whole carful of munchkins, or an office of inquisitive co-workers.

Would I Recommend Them: Absolutley.

Would I Buy Them Again: I already have.