I’ve dedicated this blog to in-depth, clear-eyed analysis of the strangest, most intriguing and generally hardest to fathom products Trader Joe’s brings to market. The things, in other words, that make you go “Huh – I wonder what that tastes like?”
If I see, say, a can of pumpkin seed oil, or a bag of fried parsnips, I’m pretty much going to grab it immediately. That sort of stuff is irresistible to me. On the other hand, some new type of milk chocolate caramel, or whatever, is simply a bore. Without even tasting that I can tell you exactly how good it is. It’s really, really good. You don’t need me to tell you that milk chocolate and caramel taste good. Maybe  if you throw a little quinoa in there, I’d be interested. Maybe drop some pumpkin pie spice on it and I’ll perk up my ears. So why, you may be wondering, am I bothering to review something as mundane as average, unadorned, regular-old marshmallows?
Well, one – because Trader Joe’s has never carried marshmallows before. You can get muhammara, chocolate-covered potato chips and 4 different types of guac, but you’re out of luck if you want dry beans.
More importantly, however, these are the best damn marshmallows I’ve ever tasted – bar none.
Never did I dream that the standard, industrial-produced marshmallows that I have literally consumed thousands of over the course of my life – in hot chocolate, on smores, as peeps, enrobed in cheap chocolate or dusted with coconut – could be anything more than little sugary pillow of air. Never did I dream that marshmallows, by themselves, could be a delicious, craveable treat.  That’s what we’re talking about here with Trader Joe’s Maershmallows. It’s as if I’d only ever eaten garden variety Hershey bars my whole life, then someone gave me a dark chocolate bar filled with bacon-ganache. I never knew they could be this good.
Trader Joe’s Marshmallows have literally opened my eyes to the world of inferior marshmallows I have been living in. Writing that down makes me feel like the most shallow person in the world – but I’ll take my enlightenment where I can get it, thank you.
What makes these marshmallows stand out? Everything. Imagine for a moment, every enjoyable quality that an ordinary marshmallow has. Now improve them all by 200%. It’s like Trader Joe’s just brought a Lamborgini to a planet that only had go-karts.
The very first thing you’ll notice as you pick up the bag is how dense and hefty these marshmallows are. Still squishy, yes. Still malleable and yielding, but one of these marshmallows sits in the hand with the weight of three ordinary name-brand marshmallows. It’s as if Trader Joe’s decided to pump a third less air into the same quantity of marshmallow stuff.
Now take a bite. How much richier, chewier and – most notably – creamier do these Trader Joe’s Marshmallows taste? Even better, enjoy that satisfying sweetness. I’ve only never known the sugary, hit-you-in-the-bloodstream extruded corn syrup sweetness of name-brand marshmallows. Trader Joe’s marshmallows, even though they’re denser, are more mellow in their sweetness and more enjoyable to just snack on.
Yes, I said it, snack on. These marshmallows are far more than the raw ingredient for some dish topping – they’re good enough to nibble at while sitting around watching a movie. They’re more of a candy bar substitute than a marshmallow substitute.
Of course, there’s nothing stopping you from using these in place of more ordinary marshmallows in any dish. I tried making a batch of rice krispy squares, and found that not only where they waaay harder to stir, they made for a gooier, and tastier final treat. No surprise there.
There’s no doubt about it – Trader Joe’s Marshmallows deserve a rare 5-star review. They did for me what cookie butter did for me – opened my eyes to a whole new, delicious vista that I never knew existed.

Would I Recommend It: Hell yeah!
Would I Buy It Again: It’s the only type of marshmallow I’ll ever by again.
Final Synopsis: The best marshmallows I’ve ever had in my whole life. 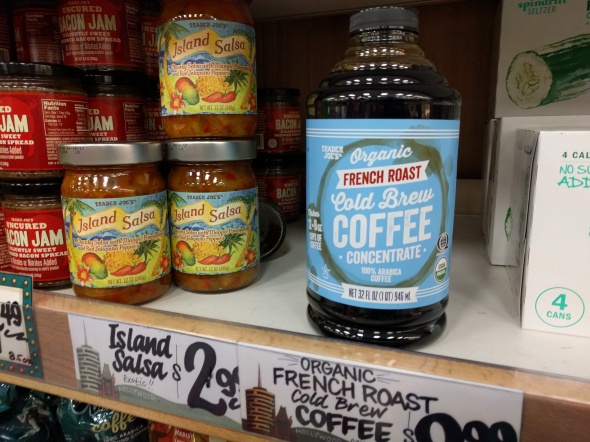 Some time ago I published my review of Trader Joe’s original Cold Brew Coffee Concentrate. The product was, needless to say, an instant hit. 24 ounces of fine, dark coffee, cold press-expelled and concentrated 2-to-1. It not only scratched that caffeine itch, but it did it in a damn nice way. It was, in its own way, the cookie butter of the coffee drinking world – a remarkable game changer that everyone can agree on.

Now, I’m not much of a coffee drinker myself – my monthly coffee intake is roughly equivalent to what most people drink in one morning. I bring up this as a sort of inverse bona fides – I really know next to nothing about coffee. Nevertheless, even I, untrained palette I, was able to appreciate the fine, if subtle, qualities present in Trader Joe’s Cold Brew Coffee Concentrate. In fact, TJ’s cold brew coffee is responsible for the very first redaction I ever ran on this blog. After giving it an initial rating of “Eh, I don’t get what the big deal is”, I ended up going back to the bottle time and time again, until I’d polished the whole thing off. It’s that good. Even an untrained, unsophisticated coffee drinker preferred it to ordinary brewed coffee.

What’s the appeal? The biggest difference is that cold brew coffee is almost unbelievably mellow and unacidic, compared to ordinary brewed coffee – even for “low acidity” blends. When coffee grounds are cold brewed they’re basically just soaked – soaked in cool water for a day or more until gentle osmosis has impregnated their medium with all the flavor and caffeine of the bean. This lengthy process is the reason you have to buy your cold brew coffee pre-made – and why Starbucks runs out of it part way through the day. You simply can’t brew up more of this stuff on command.

As a result of this patient process, the resulting coffee avoids any of the acrid components that show up in hot-brewed, or over-cooked coffee, while also teasing out more subtle aspects of the bean that obliterated by being exposed to boiling temperatures. The coffee is still as bold, bitter and brawny as it would be of it was hot brewed, it’s just easier on the palette, teeth and, importantly, stomach.

So if Trader Joe’s cold-brew coffee is already such a hit, what does this new variety have to offer? Why bother with a French Toast? To be honest, there’s really not a whole lot of difference between the new brew and the old brew – more crunchy cookie butter vs. smooth than of cookie butter vs. oreo cookie butter.

“French roast” just refers to how long a
coffee bean has been roasted for, before grinding. In this case, a very long time. On the informal scale of bean roasting, the French is the penultimate roasting designation – only the Italian roast subjects beans to more heat for longer. As you might expect, a longer roast results in more of that smokey, toasty, roasted taste, but at the cost of burning away any individual characteristics of the original bean. As such, it’s not usually the coffee conisseur’s first choice. However, that same extended roasting process also breaks down the acid in the bean, making it a naturally choice for those looking for a lower acidity brew.

The end result means that this brew is a little bolder and even less acidic than its forbearer. Those are both pluses in my book. If you’re looking to expand your cold brew experience, or just trying to find the least acidic coffee on the market, you’ll want to give this one a try.

Would I Recommend It: Yup – if you like cold brew coffee, you’ll like this.
Would I Buy It Again: This jug is a 2x concentrate, so it should last me a year or so.

Final Synopsis: More of what you live in a cold brew.