If life gives you parsnips, you make parsnip chips. This is another Trader Joe’s product that, like Avacado’s Number Guacamole, I can’t help but feel existed as a clever name first, and only a product as an after thought. A rhyming snack food that uses an obscure vegetable? How could anyone at TJ’s say no to that? Certainly it’s what I’m always on the look out for.

But if a product exists only to serve novelty, can it really be all that good? In this case, the answer is a surprising “Yes!”. Trader Joe’s Parsnip Chips are a wonderfully flavorful, surprisingly sweet, crunch alternative to run-of-the-mill potato chips. It’s a classic case of “Try it, you’ll like it.” But what exactly is a parsnip anyway?

In the wild, the parsnip looks, to the untrained eye, exactly like a big, white carrot. In fact, the parsnip is a close relative to the carrot. Originally native to Eurasia, the parsnip was imported to the Americas by early European settlers in the 1600’s. By the 1800’s, the root vegetable – firmly ensconced in three continents and with a long history of use that extends back to the Roman Empire – was basically forgotten, sidelined as modern agricultural and shipping practices replaced it with other vegetables on an industrial scale. Nowadays, the parsnip is really only encountered by most people in certain niche applications or as the basis of regional traditions.

While the parsnip may not be as popular today as it was in ages past, these parsnip chips make a good case for a comeback. You might not expect a colorless root vegetable to be sweet and flavorful, but these chips are exactly that. Inside the bag, the chips themselves are small, thin and brittle with a tendency to bunch up in clusters – definitely unsuited for dips, but good for general snacking. The frying process has made the parsnip slices curl and brown, more like a plantain chip than a potato chip. However, as soon as you take find that they pack an over-sized taste – long sweet and mellow, with a vaguely carrot-y aftertaste.

I’ve written before about the surprising sweetness of carrots – well it turns out that parsnips are naturally sweeter than even its own close cousin. In fact, in ancient times, before sugar canes or sugar beets were grown, it was parsnips that were used to sweeten meals. It’s this sweetness that is the most notable feature of the parsnip chip, but a very mild sort of sweetness that satisfies without overloading you on sugar. That sweetness, combined with the nuanced, earthy, root vegetable taste, is a real delight.

I was expecting something dry and bland from these chips, but instead I found a wonderful substitution for other “naturally sweet” type chips – in fact I liked these parsnip chip so much better than, for instance, the sweet potato chips you find around. However these chips are far from a healthy alternative – due to the fact that these parsnips have been fried up in a serious amount of oil. With a rather surprising 12 grams of fat per 12 chip  serving, these are some very oily chips.  Expect some greasy fingers after polishing off a bag.

To my taste, I found these parsnip chips more than just a novelty. For a list of ingredients that is nothing more than “parnsips, oil, salt” I was completely surprised by the fullness of flavor – a world away from the one note starchiness of potato chips. If they were healthier I’d be eating them all the time. As it is, I’ll enjoy picking them up a few times a year for an interesting snack that has stands out from a pack of monochrome competitors.

Would I Recommend Them: Yes – these are worth a taste.

Would I Buy Them Again: Not often, but I will. 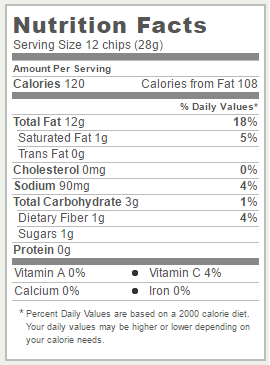 As I mentioned in my last post and as is, I suppose, self-evident, I’ve returned from my indefinite hiatus to write – you know –some more stuff about food or whatever.

It may have been the dried whole baby bananas that stuck with me during my time away, but it was the numerous encouraging voices that checked in with my blog of out genuine concern that spurred me back into action. Well, that and one other thing – Trader Joe’s Bacon Jam.

There are some challenges that simply must be risen to. By releasing Bacon Jam TJ’s was practically daring me to return to blogging. After all, who else could possibly write off-beat, off-the-cuff, man-on-the-ground style articles with just a dash of snark? Who else, other than the numerous other Trader Joe’s review blogs, some of which directly rip-off my website design? Obviously the world needed me.

When I see products like Trader Joe’s Bacon Jam, I can’t help but think that there’s someone, somewhere in the high echelons of TJ’s who is compelled by a Joker-style urge to unmake the order of the world. Only instead of throwing bombs, his tool is novel food products – and he wields that tool like a hammer against the glassine walls of reality.  If you wanted to break down the shared consensus of what is logical and what is madness, you could do worse than mass producing products like Trader Joe’s pumpkin-spiced pumpkin seeds, pickle popcorn, dehydrated kimchi, etc.

Add to that list Trader Joe’s Bacon Jam. If I assigned myself the task of thinking up the most outlandish, bacon-food mashup up, I could work for hours (Bacon Candy? Bacon Beer? Bacon Pie?) and never have come to Bacon Jam. Incidentally, all the other things I came up with are actual, real products as well.

Of course, the same could have been said about cookie butter, and look where cookie butter is now, – ascended to Olympus to bathe us all in its warm, loving gaze. To be clear, Trader Joe’s Bacon Jam is nowhere near the same caliber of delicious as cookie butter, but a sort of strange parallel does present itself. Cookie butter…bacon jam… we may have to face the very real possibility that Trader Joe’s ideal target demographic is late career Elvis. It’s now easier than ever for me to take two slices of bread and with a few easy moves make an unholy cookie butter and bacon jam sandwich. Deep fry that and throw on a white sequined suit and you’re ready to die mysteriously on a toilet!

Actually the most surprising thing about bacon jam is that it isn’t all that bad. In fact, it’s a surprisingly edible and spreadable condiment. From the name you might expect it to be quite sweet, and while it certainly contains some sugar, this isn’t a pork version of Smuckers. Instead, it’s a vinegary and tangy spread with a mellow, apple-y sweetness. It immediately reminded me of that classic American recipe, green beans and bacon (or the similar recipe for spinach and bacon salad). This bacon “jam” has that same baked-in-vinegar taste that that the bacon dressings in those recipes have – it’s just as if all that dressing was gathered up and packed in a jar for your convenience.

The result is as sort of quasi-congealed, spreadable bacon condiment that can add that meaty, zingy sort of taste to… well, whatever you want to put it on, I guess. What that is, exactly, is up to you. Trader Joe’s makes the half-hearted suggestions of using it on burgers, BLTs and pizzas, although none of those struck me as killer app (-itizer…ha.) Like some of Trader Joe’s other novel food creations, it might make an interesting addition to the cabinet, but fails to scratch any real itch.

Would I Recommend It: Yes to the adventerous, no to the staid.

Would I Buy It Again: I can’t think of a reason to.

Before I get into talking about Trader Joe’s Dried Baby Bananas, I should probably acknowledge by absence lo, these last 4 months. After posting twice a week, every week for the last 4 years, I just got tired. That, combined with a new ad revenue sharing model implemented by WordPress (“Thanks for the increased traffic – we’d like to start paying you half as much.”) meant that a short Christmas hiatus turned into a long-term indefinite hiatus.

And honestly, that indefinite hiatus would probably still be going on if it wasn’t for two factors – first, Trader Joe’s started all but taunting me with some of the stuff they’ve been stocking, but more importantly, I received some very touching, very concerned e-mails from fans of the blog. I certainly wasn’t expecting that – and it simply melted my heart. Sure, I could get by without the blog, but how could I deny you, the reader, of my rambling, unprofessional, knee-jerk screeds? That’s what really kept me up at night.

So anyway, I’m back. I’ll be making a couple tweaks in the weeks to come – in particular I’ll be posting only once a week going forward, and maybe making some changes to the format, but really when Trader Joe’s comes out with whole baby bananas, dried into tiny, chewy brown fingers, the time has come again to weigh in.

These whole, dried bananas showed up a couple months ago, but I simply can’t get them off my mind. When it comes to dried fruit, I tend to think that there aren’t any real advances to be made in the field since, say, the Babylonians. It’s dried fruit – once they figured out you could dry fruit for storage it probably took them all of an afternoon to explore every available option. You wanna put apple slices in there? Sure, why not. Apricots? Orange slices?  Mango? Pretty straight forward stuff. Maybe someone remembered to try persimmons a day or two later. This is low tech, elemental stuff.

So why have I never before in my life seen whole dehydrated bananas? It’s certainly not because they’re not delicious, because these dehydrated baby bananas are the very definition of nature’s candy. Starting with whole baby bananas out of Thailand, Trader Joe’s simply dries them until they wrinkle up into desiccated, little brown fingerlings – a few inches long, and about half an inch wide. The sugar in the banana concentrates down as the bananas shrink, resulting in that mild, mellow banana sweetness and taste, only sweeter and stronger. Think jelly belly compared to jelly bean – more flavor in a smaller package.

The resulting texture is still soft, but also vaguely leathery and chewy – making them extremely enjoyable to snack on. This, combined with the wrinkled, flaccid, tanned appearance is perhaps a bit off putting. I’ll admit that the notion that this must be a little bit what munching on a mummy’s fingers would be like did flash through my brain on more than one occasion while eating these – however they’re so tasty and snackable that they easily overcome any reservations about texture or appearance.

Trader Joe’s suggests that these make an excellent snack for “little hands and large hands alike”, which only reinforces the whole “I’m eating fingers” thing, but still makes a good point. You may only get about 20 of these baby dried bananas per 6 oz. bag, but they satisfy so well, and are so cheap, that they should last a a whole carful of munchkins, or an office of inquisitive co-workers.

Would I Recommend Them: Absolutley.

Would I Buy Them Again: I already have.