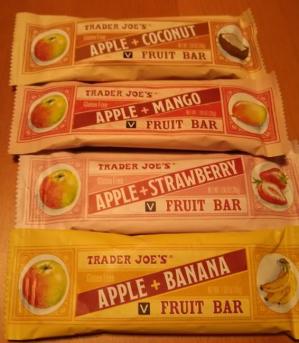 TJ’s, you’re killing me with these generic fruit bar names. C’mon get some adjectives in there!

With the addition of Trader Joe’s Apple and [blank] Fruit Bars, they have added another participant to the already crowded Trader Joe’s fruit bar arena. How, I wondered as I picked these up, could Joe possible justify the existence of a third, no nonsense, “healthy” fruit bar?

Open up a pack and take a look. For starters, you’ll notice that they’re not all that flat. Each bar is a good half inch or more thick, with the heft and body of a candy bar. As you pick it up, you’ll notice that they’re not all that sticky either – you can wrap your fingers around any of the varieties without fear of peeling them away to the dreaded sensation of “sticky raisin fingers”.

You’ll notice another big difference as well – unlike TJ’s other fruit bars, these guys look minimally processed. Instead of a uniform fruit paste, each of these bars is visibly full of shredded fruit – be it bits of strawberry, chunks of banana, lumps of mango, or slivers of coconut. That same quality means that each type of bar actually feels very different in the hand. The Apple & Banana is probably most dense and firm, while the Apple & Coconut has a tendency to crumble as you handle it.

Which brings us to the taste. Apple goes into basically every fruit bar ever made because its pulp is simply excellent and binding things together. What that means is that you can expect all of these bars to taste at least a little bit like apple. The question is, how much does it taste like anything else?

Actually, before we even get into that, I’d better mention that these bars are surprisingly unsweet. To be sure, they are definitely sweet as compared to – for instance, dirt. But compared to any of the other TJ fruit bars I’ve reviewed these bars are much more muted. There is none of the light-up-your-tongue zazz you normally expect from these sorts of snacks. In fact, these fruit bars are less sweet even than the fruits they’re made from.

The reason for this, in part, is because of the unsulfured nature of the raw fruit that has gone into the bars. We’ve talked about the sulfuring process

Now those are some meaty fruit bars!

before – and how it preserves the color and taste of fruit once it’s been dried. Without preservatives, and without the chemical changes that occur with exposure to high heat, these bars are essentially just shredded, dried fruit – and as such lose a good deal of their fruit’s original intensity.

Why aren’t the bars exposed to high heat? Because they’re “raw”, of course. The notion of raw food, and the ethos of rawism, is simply too big a topic to tackle in this post. One of the more interesting puzzles of only consuming raw food, however, is deciding at what temperature a raw food should no longer be considered raw. It’s generally agreed that the cut off for vegetables and fruits is between 104 – 120 degrees Fahrenheit (40-49 degrees Celsius). Presumably, these bars abide by that guideline, although there is no official “seal of rawness” yet, so really it’s anyone’s guess.

Which brings us back to the taste – just how good are these raw fruit bars? I’m happy to say that even though they are somewhat unsweet, they’re still quite flavorful. The guest fruit in each bar (banana, coconut, mango or strawberry) really come to the fore in each bite. The sugariness may be gone, but the appealing underlying taste of the fruit is still there, mingling pleasantly with the subtle, mellow apple taste. Essentially, you are getting the taste of the fruit without the sweetness. The Apple and Banana Bar, for example, tastes like a cooked plantain more than a ripened banana. The same applies to the coconut, strawberry and even the mango. You can recognize and appreciate the flavors with the candied sugariness common to many dried fruits.

Are these bars worth your money then? There’s certainly a lot to like about them. They give you a convenient way to keep your blood sugar up, a way to stay committed to your raw food diet, and can act as a substitute candy bar for dieters in need of a cheat. Then again, a regular piece of fruit does all of that just as well – and the fruit tastes better.

Really, it comes down to if you like everything about fruit except the sweetness, or if you’ve been questing for a fruit bar that won’t make your fingers sticky. If either of those qualities defines you, then you’ll want to pick up these bars. For everyone else, I’d suggest giving one a try, if for no other reason than the novel experience.

Would I Recommend Them: Sure, if you need a healthier alternative to a Snickers.

Would I Buy Them Again: I’d buy these before any of the other Trader Joe’s Fruit bars, just because they’re less sticky.

Final Synopsis: A hefty fruit bar that isn’t all that sweet.

The serving suggestion involves laying them on top of a half-eaten, non-chocolate banana? You have gone banana’s Trader Joe’s!

Apparently, Trader Joe’s has gone bananas…one bite at a time, which sounds harrowing but, going by the package graphics, actually seems to be quite a wacky adventure. Admissions of madness aside, someone at Trader Joe’s must have a pretty damn good idea what’s going on, because these chocolate-covered, frozen banana bites are delicious. Munch-tastic I might even say.

The strangest thing about this this banana snack is that we don’t see it in freezers across the nation. Covering sweet, frozen banana in a thick coating of sweet milk chocolate is as brilliant as it is tasty but, outside of certain episodes of Arrested Development, it’s rare to see a really good frozen banana in this country. Let’s get on this, America! The Bluth’s don’t have a monopoly on frozen banana stands – they don’t even really exist!

The second strangest thing about Trader Joe’s Gone Bananas is the very non-traditionally Trader Joe’s packaging. The Trader Joe’s MO is generally something austere, psuedo-victorian, and plastered with at least one bit of vaguely congruous stock clip art – an approach they take to everything from minestrone to salmon jerky. This package, on the other hand, is bold, features an honest-to-goodness product shot and a playfully cartoon-ish sock monkey. I keep having to look at the Trader Joe’s label to remind myself that it’s really a Trader Joe’s product.

But a Trader Joe’s product it is, and it’s one of the simplest products they have on the shelf. Exactly two ingredients go into it, bananas and chocolate. Thankfully they decided to go with milk chocolate instead of trendier, and more problematic dark chocolate. The result is a sweet, thick chocolate shell, that gives way to a surprisingly sweet and creamy banana core. It works together so well that there’s no need for anything else – between the two you’re taken on a voyage of mingling, complex flavor with every bite-sized bite.

As the cute name, cute packaging and bite-sized portions may suggest, this is a great snack/desert for kids. The portion size is easy to control and, as far as deserts go, it’s a natural and healthy alternative to more sugary food. The only real caveat? The frozen bites tend to stick together in hard to separate clumps. Letting them thaw a little helps get them apart, but leave them out a few minutes too long and they start to go mushy on you. Get distracted or pulled out of the room and you might come back to find that you’ve got some soft, chocolate-covered banana lumps on your hands.

That said, these still aren’t exactly health food. Four of these little bites packs in 130 calories, 70 of that from fat. In fact, one serving has 34% of your daily saturated fat allotment. That’s not unexpected for something with so much chocolate in it, and all else considered it can still boast that there are only 14 grams of sugar per serving.

Really though, the sell here is on the amazing taste. I’d buy these again even if they were twice as bad for me. In fact, for those of you looking to get really decadent with it, Trader Joe’s has published their recipe for the Gone Banana’s Split – a gooey, sweet mess of chocolate covered banana goodness.

Would I Recommend It: Yes – these are great for kids or adults.

Would I Buy It Again: Absolutely – they’ve got it all figured out.

Final Synopsis: Who would have thought simple chocolate covered banana bites could be so good?