The kind of panettone Jack Skellington would have been made.

As you may have noticed from my unofficial first post last week – Pumpkin Season has returned again to Trader Joe’s! Today, we really get right into the swing of things with Trader Joe’s Pumpkin Panettone – a pumpkin-spiced, pumpkin-cream filled, Italian desert bread stuffed with candied pumpkin.

Yes, as you can tell from the last sentence the annual pumpkin madness has fallen upon us again – the most exciting and, occasionally, harrowing time of the year. There’s no telling what fresh chimeras or monstrous hybrids the Trader Joe’s food scientists have cooked up in their labs, secreted far from judging eyes in the protective, pumpkin-scented bedrock of TJ’s Monrovia headquarters.

Where does Trader Joe’s Pumpkin Panettone fall in this pumpkin spectrum? That depends in large part how you feel about panettone in general.

As you may or may not know, panettone (pronounced, approximately: “pa-nuh-toe-ni”) is a traditional Italian Christmas “cake”. I put cake in quotes here, because even though it’s generally referred to as such, panettone is much airier and “bread-ier” than the more common sort of American cakes. Like fruitcake, panettone is more of a concept than a set recipe, and is made as many different ways as there are people who make it. Nevertheless, all panettone are linked by a couple universal factors – they’re laced with dried or candied fruit, dabs of marscapone cream, and are always airy and bready.

Trader Joe’s does carry regular panettone around the holidays, so they know how they’re made. This year it seems they couldn’t contain their excitement for the sweet bread any longer, and decided to bring us a unique, pumpkin-based version. Instead of candied citrus and raisins, there’s candied pumpkin. Instead of marscapone cream there’s pumpkin-flavored cream. There’s even dried pumpkin powder worked into the dough. With that much pumpkin, you might expect the cake to be a double-fisted pumpkin punch to the jaw. Instead, it hardly tastes like pumpkin at all. All you’ll really taste is the traditional, bready panettone cake, and the sugary sweetness of the cream and sugar. The actual pumpkin bits – as numerous as they are, have been denatured of their natural pumpkin flavor. At best, if you’re paying attention, you’ll notice a very, very subtle pumpkin aftertaste and that’s it. 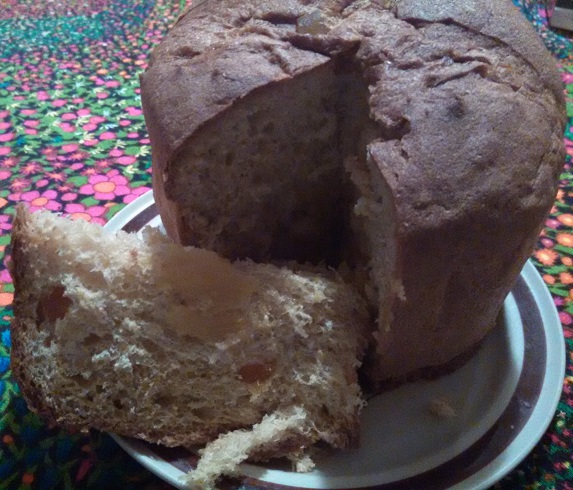 The overall effect is somewhat bizarre. It’s like having a glimpse into some alternate universe where the twisted occupants make panettone for Halloween instead of Christmas. In fact, this is probably what Trader Joe’s has in mind for this product. Each Pumpkin Panettone comes packaged in a very nice looking gift box, including a pretty little ribbon handle – perfect for a little host/hostess gift.

In terms of a nice looking gift, you could do worse. Show up with a Pumpkin Panettone and a bottle of wine to the seasonal autumn party of your choice and you’ll look quite dashing. Just don’t wait around the buffet table fishing for compliments – this panettone is likely to impress visually, but the taste is more likely to leave people scratching their heads than going back for seconds.

If you like Christmas panettone you are likely to enjoy this – the pumpkin hardly makes an appearance, and the sweet bread aspect is dominant. If you’ve never much enjoyed panettone, or if you’re looking for something heavy on the pumpkin, you should pass this up.

Alternatively, I would highly recommend punching it. The high, domed form of the panettone, combined with the soft and airy interior, make it an absolute delight to deliver a devastating front punch to. If you buy a Pumpkin Panettone, and you don’t like it, I’d definitely suggest winding up and letting one fly directly at the top of the dome before taking it back to TJ’s for a refund.

Would I Buy It Again: No thanks.

Trader Joe’s continues to deliver high-quality Indian food with their latest offering – Trader Joe’s Paneer Masala Naan. When it comes to Indian food, TJ’s always seems to get it about right – whether that be their Aloo Chaat Kati Pouches or their Uttapam, so it was a thrill to see a new and delicious Indian bread available to try.

While at first Indian food names seem to be dense and intimidating, as soon as you start picking up some key phrases they are actually pleasantly direct (much easier to parse than, say, direct Chinese translations of food, which tend to more poetically reference clouds, ears, or quasi-mythic generals) Paneer meaning cheese, Masala meaning a blend of spices, and Naan, of course, meaning bread.

Combine those three terms, as they have here, and you’re left with that tasty, chewy, oblong flat bread we all know and love, but somehow stuffed with cheese, diced onion and plenty of savory spices. “A cheese stuffed naan?” you’re no doubt, asking yourself incredulously. Yes, sit down, a cheese stuffed naan – but stuffed classy-like. This isn’t some Taco Bell-style molten “cheez” filled dough snack, it’s a scrumptious, shareable, understated addition to your classy Indian or South East Asian inspired dinner. The cheese, for one, is present only in a reserved quantity – a thin layer that effuses throughout the soft and chewy bread rather than glue it together.

In fact, apart from the appealingly moist texture the cheese lends the naan, you won’t notice it as much as you will the masala spice mix. The onion is the clearest participant, showing up well-cooked and diced so as not to sting the tongue, and it’s complemented nicely by coriander, green chili, ginger, and the other miscellaneous spices that TJ’s doesn’t bother to delineate on the label but which likely include fennel, cardamom, nutmeg, and more in small, measured quantities.

Naan is one of the most delicious forms of bread in existence, when done right, and Trader Joe’s does it right here, perfectly balancing crispiness with moist toothsomeness. You will want to make sure you pop it in your oven for long enough to ensure it is heated through and through – a good 10 – 15 minutes or so. Sure, it would be preferable if you could just microwave it, but good food is seldom microwaved.

Trader Joe’s claims they’re able to deliver on such high-quality Indian food, time after time, because they actually have their food hand-made in India itself. In this case, their naan hails from that Jewel of the West, Gujarat on the west coast of the subcontinent. You should be thrilled to hear because, one, it means you’re getting authentic hand-made Indian food in your local grocery store, but also because, two, it gives us a chance to talk about the Great Rann of Kutch!

We briefly covered the marvelous Thar Desert a while back, and those endless salt flats known as the Rann of Kutch which borders it to the south. This unique ecoregion is home to the graceful, loping nilgai, and is fed by the sinuous Luni River and I haven’t made up even one word in this whole paragraph. All of these things are real things. I would strongly argue that the Great Rann of Kutch has the single best geographic name of any location on Earth, beating out even the Forth of Firth, and Llanfairpwllgwyngyllgogerychwyrndrobwll-llantysiliogogogoch. And basically, folks, if that doesn’t get you in the mood to eat some naan, I’m not sure what to tell you.

Would I Recommend It: Yes, this is some good naan.

Would I Buy It Again: Yup, it’s perfect for sopping broth, grippin’ chicken or just eating by itself.

Final Synopsis: Cheese and herb stuffed naan – what’s not to like.

Well folks – Trader Joe’s annual corn madness is upon us once again. The pumpkin hoppers have been serviced, the pumpkin chutes re-greased, and the pumpkin crazed madmen in the R&D department are off to a flying start with Trader Joe’s Pumpkin Cornbread.

What possessed Trader Joe’s to add dehydrated, powdered pumpkin to cornbread I can’t say, whatever it was, it’s the same mechanism that drove TJ to put pumpkin in waffles and croissants. In all these products the addition of pumpkin seems completely superfluous – an unnecessary ingredient shoehorned into an food that was already perfectly fine. The pumpkin will not be denied. It’s almost sinister, in an Invasion of the Body Snatchers kind of way. You turn around and what you thought was cornbread is now pumpkin cornbread. You go to the fridge only to find your cream cheese is now pumpkin cream cheese and your yogurt has been replaced with pumpkin yogurt. You go to the Trader Joe’s to complain, but everywhere you look there’s more pumpkin products, insinuated into every aspect of your daily life, each box being dutifully stocked on the shelves by smiling Trader Joe’s employees.

At any rate, they did go and put pumpkin in cornbread, so I went ahead and ate it. I wasn’t exactly sure what to expect, even on a basic level. Notions as to what “cornbread” means varies wildly from state to state. In the South, where cornbread got its start, it’s made with practically no sugar and little or no flour. Up North, in Yankee lands, it’s a much sweeter dish, made with plenty of sugar and wheat flour besides making it more airy and cake-like. Meanwhile, out in the great Southwest it’s commonly made with creamed corn, jalapenos, and even topped with melted cheese.

Trader Joe’s Pumpkin Cornbread uses a Northern cornbread recipe, going heavy on the wheat and sugar, and fairly light on the corn meal and pumpkin. In fact, flour and sugar are the first two ingredients on the box, only then followed by corn meal and finally pumpkin. The result is a light, cakey cornbread, that cooks up in 30 minutes or so.

Fresh out of the bag, the cornbread mix smells delightfully redolent, as a heady mixture of spices wafts up to the nose. Pumpkin can be detected in here, sure, but cinnamon, nutmeg and cloves even more so – all the classic spices you find in pumpkin pie filling. The finished cornbread cooks up to a rich, golden brown – darker than ordinary cornbread. Following the directions exactly results in a dry, crumbly cornbread that’s ready and willing to soak up some butter. If you like a moister cornbread, you’ll want to consider adding a touch more oil and milk.

Shockingly, despite the pumpkin pie smell that comes off the cornbread, there’s almost no taste of pumpkin in the bread at all. In fact, it almost tastes exactly like regular cornbread, except spiced with a gentle amount of the above mentioned pumpkin pie spices. This isn’t a heavy spice cake, but a light touch that imbues an otherwise traditional cornbread recipe with an intriguing taste of autumn flavor.

Personally, I was disappointed that there wasn’t more of a pumpkin presence in the bread – why bother calling it pumpkin cornbread if you’re not really putting any pumpkin in it? That said, even without a strong pumpkin taste, the cornbread is quite tasty. The touch of spice adds an extra dimension to the bread, and really comes to the fore when loaded up with a good pat of butter.

Would I Recommend It: Yes, this is a good fit for autumn dinners.

Would I Buy It Again: I’d probably buy this before I bought regular cornbread, to be honest.