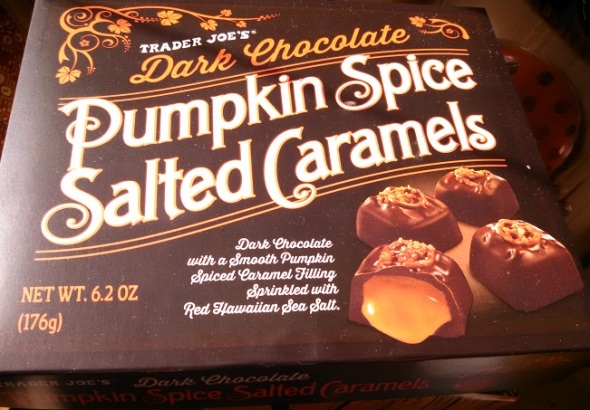 Trader Joe’s Pumpkin Madness continues, and we really have something unusual for you today.

“But surely it couldn’t be more unusual than the Pumpkin Panettone we read about in the last post?”, I hear you asking, glancing at each other in puzzled concern.

The thing is – while Trader Joe’s pumpkin-filled panettone is clearly the product of a mind deranged by over-consideration of gourds, it is still a product easily recognizable and identifiable. Trader Joe’s Dark Choclate Pumpkin-Spice Sated Caramels, on the other hand, have no analog on this planet Earth.

They certainly sound ordinary enough – salted caramels, sure those are delicious, dark chocolate, why not, and of course pumpkin-spice, because this is October and we can’t control ourselves.

Yes the combination of these three components results in a truly intense and wholly new sort of taste completely unlike most chocolate bonbons I’ve experienced – a taste that is nearly savory, rather than sweet.

The issue is that while “dark chocolate”, “pumpkin spice” and “salted caramel” sound good together on a box, they don’t really mingle with each other harmoniously on the tongue. Eating one of these is a little like wearing black-and-white checkerboard shorts with a plaid shirt. They components clash in bold and unusual ways.

Let’s start with the salt. A little salt goes a long way, regardless of what you’re cooking, and doubly so when it comes to candy. When I tried Trader Joe’s Milk Chocolate Jumbles, I was really impressed with the elegance they showed with applying the salt – just a few grains place carefully on top. One glance on these caramels and it’s obvious that the same restraint was not shown. Each caramel is packed with a huge clump of vivid red Hawaiian sea salt. While I applaud the gorgeous color effect it has (and really, the presentation of the whole box couldn’t be classier), this is way too much salt. On first bite you’re immediately overwhelmed by a nearly painful burst of saltiness. 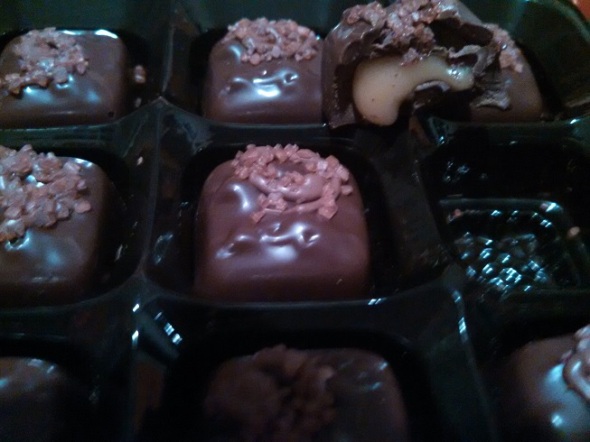 The very next flavor you’ll notice is the rich, dark chocolate. I’ve said this before, and I’ll say it again, but dark chocolate should never simply be used as a substitute for milk chocolate. Yes, it sounds classier, looks better, and people will pay more money for it – but it simply isn’t the sort of light confection that milk chocolate is. In this case, Trader Joe’s is only using 55% dark chocolate in the candy shell, but in context the bitterness really comes to fore. This semi-bitter dark chocolate collides with the intense salt, and immediately starts a violent war over your tastebuds.

This bitter/salty conflict is the start of the savory taste I was talking about above. What really drives it home, however, is the combination of “pumpkin-spices”. As we all know, “pumpkin-spice” is short-hand for a wide selection of strong spices used to turn pumpkin into something redolent and flavorful. In this case, TJ’s is using cinnamon, nutmeg, cloves, and ginger, and no shortage of it.

Right as you bite into the caramel core, as you’re recovering from the wild ride of the outer shell, this combination of spices hits you so strongly that they nearly overpower the typical caramel sweetness. The result of all this is that for a moment, you might actually believe you’re biting in a slice of meat pie, or some other savory, salty, meaty treat.

Only after a few moments, when the initial barrage of taste sensations die down, do you finally get to taste the long, mellow finish of the caramel – punctuated here and there a few parting sallies from the salt.

On the back of the box, Trader Joe’s writes: “You think you’ll know what to expect, and yet, you’ll be pleasantly, pumpkinly surprised.” Surprised, certainly. Pleasantly is a matter of opinion. I will admit, after getting over the initial shock of the first few pieces, these caramels have started to grow on me. I’d hesitate to call them “good”, in the traditional sense of the word at least, but they are incredibly intriguing – a candy unlike anything else available in the store.

While these aren’t for everyone, if you’re looking for something out of the ordinary to snack on and ruminate over, these are fascinating little morsels.

If you need a nice little hostess gift (and you don’t want to bother with a panettone), you might be tempted to pick up a box of these. The presentation is certainly up to the job – but realize that you’ll be giving them something more challenging than delicious.

Would I Recommend Them: Hesitantly, if I knew their palette well.

Would I Buy Them Again: I’m still trying to come to terms with the first box. 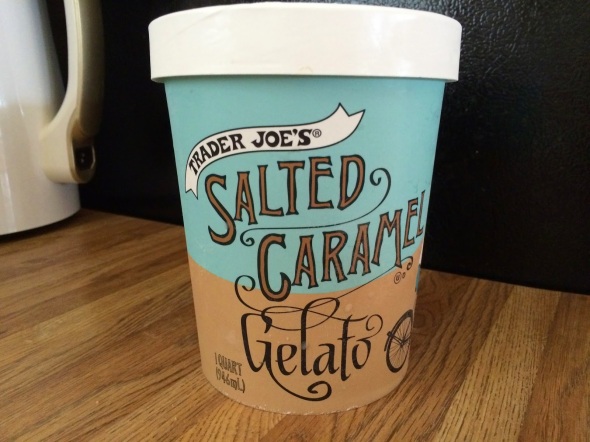 Man, doesn’t that look delicious? How could that not be delicious?

Oh, what a disappointment you are Trader Joe’s Salted Caramel Gelato. Trader Joe’s has brought so many wonderful things into my life, I try and not get too let down when something falls flat. They dream big, and for that, at the very least, they deserves our every consideration of leniency. And yet I am simply crushed by overwhelmingly lackluster execution of what could have been a mouth-melting delight.

Deserts, like everything else in life, can be broken down into closely detailed hierarchy of what-beats-what (this is the sort of thing usually done by bored nerds. For instance, me, right now). The way I see it, frozen deserts generally beat baked deserts (ice cream beats cake). Within the domain of frozen treats, we have ice cream at the bottom, then sherbet, then sorbet, and finally, at the very top, theoretically you have your gelato.

Unfortunately, what we have here is a failure of gelato. What I look for in a good gelato is something creamy, dense and bursting with rich, overwhelming flavor. For something like salted caramel it seems like this should be a grand slam. Salted caramel, so simple but under-appreciated for so long, is one of the most satisfying flavors on the market. When it comes to intense, tongue pleasing tastes, there are ways to get fancier with it (and ice cream makers certainly twist themselves in knots coming out with convoluted, over-the-top flavors), but you just can’t beat the simple blast of savory and sweet you get from a well executed salted caramel. My tongue tingles just thinking about that rich buttery sugar melting into flashes of brilliant salty bursts.

This is the first gelato Trader Joe’s has ever brought to market, and it makes sense to choose such a decadent flavor – so why does Trader Joe’s Salted Caramel Gelato fail so badly?

Mainly, there really isn’t anything interesting going on here. The gelato is creamy, but lightweight – more like a scoop of Rite Aid Thrifty brand vanilla than a premium ice cream experience. This wouldn’t be such a failure if the gelato itself was as rich, sweet or salty as you might expect it to be. Instead of being blasted by a tongue-grabbing saltiness or charmed by impossibly sweet and creamy custard, you’re presented with a blandly “meh” sort of middle of the road flavor. Less creamy than their vanilla, less sweet and savory than their cookie butter ice cream, there’s no reason to come back to this mediocre confection.

In fact, Trader Joe’s has a plethora of delectable ice cream treats to choose from. Despite the name on this bucket, don’t expect it to beat out any of the other ones. I’d buy much more likely to buy another half gallon of Trader Joe’s Soy Creamy Frozen Desert before I bought more of this – not just because it’d be healthier, but because the vegan soy milk is at least doing something interesting with flavor.

Would I Recommend It: No way – go for the Cookie Butter ice cream first.
Would I Buy It Again: Not so long as I have any other choice.
Final Synopsis: “Salted” “Caramel” “Gelato” that fails to live up to any part of the name. 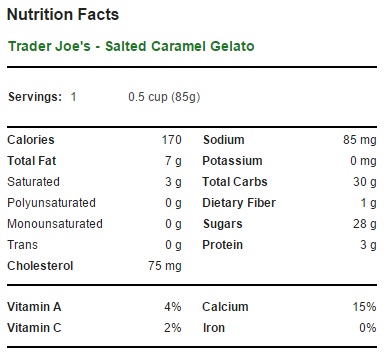